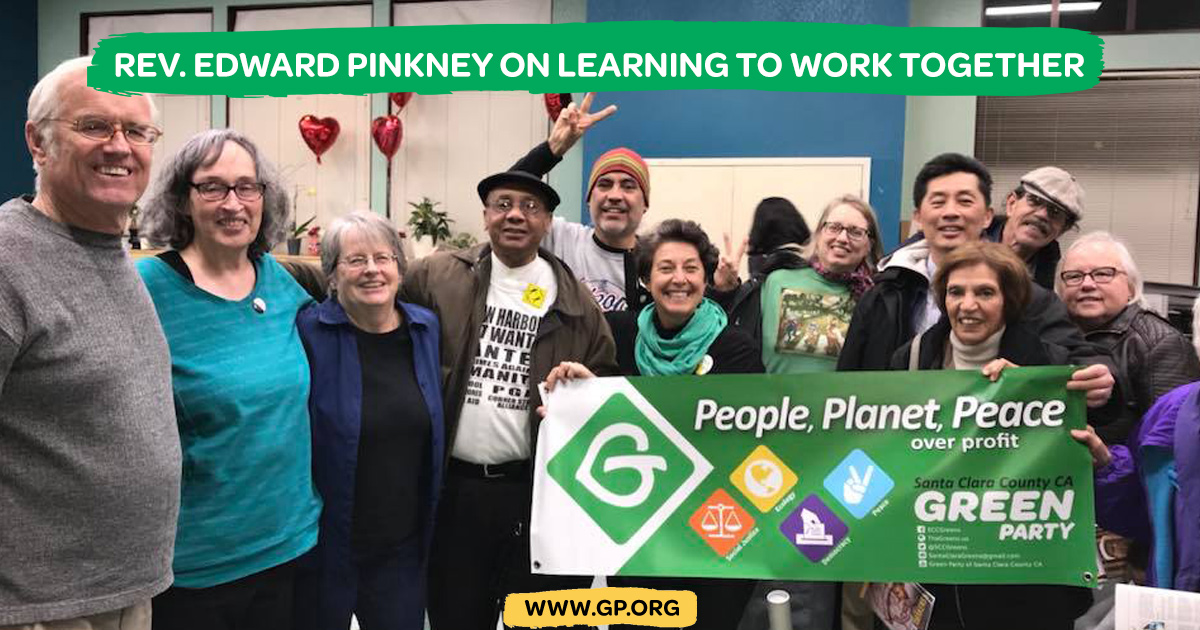 Below are excerpts from a speech by Rev. Edward Pinkney at California State University in February, 2018. Green Pages recently ran a cover story about Rev. Pinkney's experience as a political prisoner in America.

"There are 400 families in America who make an average of $97,000 per hour and the people [are fighting just to] make $15 and the majority of us don't say nothing. Fifty-three cents out of every federal dollar goes to the military. And yet they won't provide money for education of the children. As a minister, as a teacher, as a preacher, it is imperative that we lean on the Bible and teach what is really going on.

"My struggle was to bring justice to my community. They had practically destroyed the city. Their plan was to wipe out anybody who stood up. We fought Michigan's Public Act 72, the [corporate] financial manager law. Then they came up with Public Act 4, the emergency manager law, which gave them absolute power. First thing they did was to take the mayor's desk and put it in the basement. Then they changed the locks on the commissioner's office. Then took away their cell phones, and anybody knows you don't' take away a Black man's cell phones! Now the commissioners wanted to join with us.

"Whirlpool was financing James Hightower, the puppet mayor, and we got enough signatures to recall him. They claimed there were five signatures altered out of 700, which wouldn't have made a difference, but they cancelled the election and charged me with election fraud. Fortunately, I knew they didn't have any evidence. Immediately, at the opening of the trial, the prosecutor said we don't really need evidence to convict Rev. Pinkney. I had never heard of that before. He said circumstantial evidence is enough to convict. They found me guilty and sent me to prison for 30 months to ten years.

"When I got there, they were waiting. They wanted me to die there. First was putting me where mold was eating me up. I lost 30 pounds and became very sick. Then they accused me of making a three-way call and suspended my phone for 180 days. I was 500 miles from home. Then a visitor of mine was stopped on his way out and they wanted his notes. They put me in shackles and took me to the hole, accusing me of trying to smuggle something out, his notes. A group from Northern University picketed outside in my defense. They came back with not guilty. The whole place was cheering.

[Rev. Pinkney then discusses the many successful efforts of unifying prisoners inside the prison through education and organizing.]

"The point is we need to take things to a whole different level. You have to tell people what is right and wrong. Tell the truth. They got us so divided up. Now they are trying to take food stamps and give you a box, nobody talking. We have to learn how to get this stuff together. It don't matter if you are Black, white, brown, red yellow, you have to learn to work together, you have to start organizing and educating and start mobilizing to change the way this system has got us fighting one another. They have us so divided up we don't know which way to go. I know we can do this.