A People of Color Bill of Rights 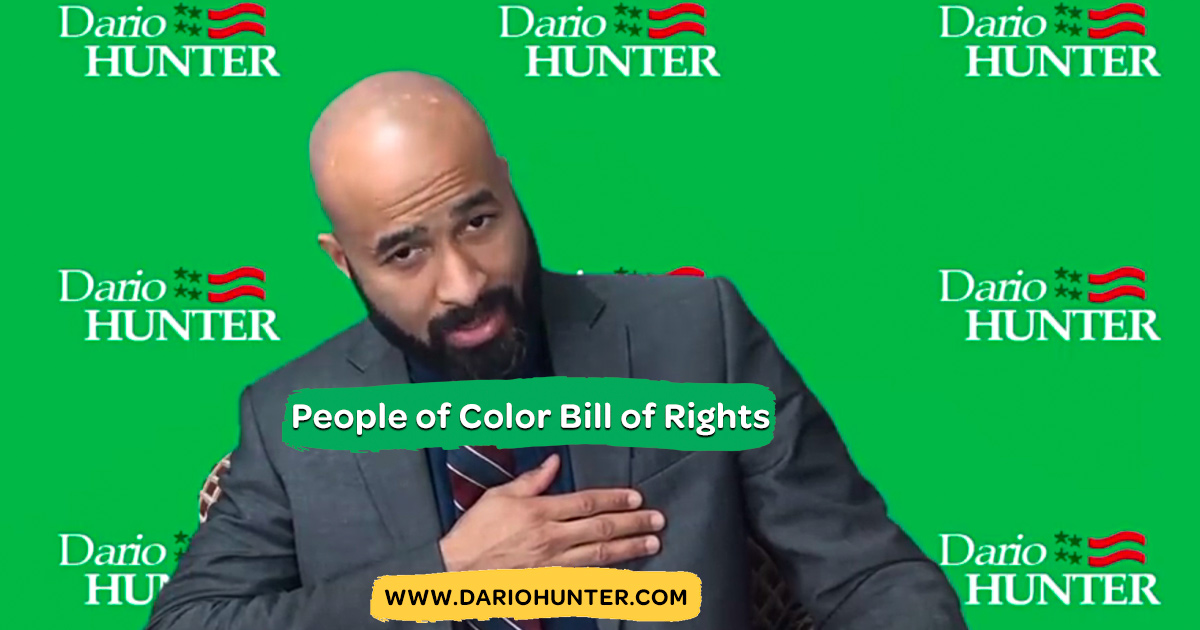 We have a Constitution, Bill of Rights, a federal statutory framework and state as well as local laws supposedly designed to enshrine and protect the rights of all. And yet we live in a country that systematically violates the rights of many, including but not limited to People of Color.

This 'People of Color Bill of Rights' is a 'new deal' for people who for generations have only gotten 'a raw deal' from this country. It is a declaration and reassertion of the natural human rights of those whose rights have been consistently disrespected for centuries.

The Hunter campaign for President of the United States affirms that America's People of Color have:

A right to equal access to justice, including (but not limited to) freedom from police brutality, racial profiling and from targeted, disproportionate mass incarceration.

A reformed public defender system – one that is more effective and efficient with more staff, lower caseloads and greater consistency in the skill applied to advocacy.

An end to private prisons, mandatory minimum sentencing and the War on Drugs – all of which have disproportionately affected People of Color and fed into a mass incarceration system that has become the new plantation system.

A right to a truly equal, quality, non-profit, local community-controlled educational system that values diversity and the histories of Peoples of Color.

Invest more in teachers and classroom resources, rather than private service companies and overpaid administrators.

Teach African American, Latinx and Native American history and culture as well as the larger story of the many diverse peoples that have contributed to this country.

Put an end to the racism of lowered expectations that encourages lower proficiency by expecting less of our children.

A right to be free from the profit-driven targeting of minority communities for environmental hazards and health neglect, a right enforced by targeted governmental protection for the healthcare and well-being of People of Color.

Due legal emphasis on enforcement, cleanup and remediation in majority-minority areas (particularly in light of the comparative disenfranchisement of those communities).

A marked increase in governmental investment in healthcare options and institutions in minority communities.

A right to a comprehensive reparative effort (i.e. reparations) to address 400 years of slavery and discrimination against Americans of African descent.

[Click here to learn more about the Green Party and reparations.]

A right to be free from all forms of colonialism, including political and economic colonialism, whether in our territories, abroad through America's interventionist activities or in our local communities.

Replace the trend toward 'gentrification' by investing in one of revitalization – improving minority neighborhoods for their residents, not merely the privileged and the corporate interests who seek to push them out.

Self determination and independence for Puerto Rico.

Cease all interventionist wars abroad. Cease creating refugees, widows and orphans that our current racist immigration policies serve to mistreat once they call upon us to uphold our refugee obligations.

A right to be free from wage slavery and corporate subjugation through employment which has succeeded chattel slavery with lower pay for People of Color, disparate working conditions and unequal advancement opportunities.

Invest in education, training, internships and private sector acceptance of People of Color in fields where they are underrepresented.

Create more opportunities for People of Color – and all American workers – to own the means of production by fostering workers' coops and collectives.

A right to governmental protection from predatory financial practices against People of Color, increasing regulation against unequal, predatory banking, lending and debt practices and housing practices.

A right to a bank account for all, designed to help stamp out predatory practices in regards to those with unequal access to banking services.

A right to a fair opportunity for normalized, documented immigration status and citizenship without discrimination due to race, ethnicity or national origin and with equal and appropriate regard for domestic and international law.

The PoC Bill of Rights: Implementation and its Relationship to Other Policy Aims

It is my aim to see these rights recognized and protected through legislative means at every level. But in so far as many arise from the rights we were already promised that have not been enforced, I pledge that as President I would use the executive powers of the office to enforce the rights of People of Color.

The enshrining of these rights through legislation and enforcement actions must happen alongside a recognition of the rights of all other marginalized and disfranchised communities, such as women, and the LGBTQIA+ community, and it must recognize the intersectionality of marginalized identities and the effect of that intersectionality in compounding inequalities.

2020 and the Rights of People of Color

A 100% transition to renewable energy is vital. The Hunter campaign supports the Green New Deal. But technology has yet to produce a solar panel that can stop black men and women from being murdered by law enforcement; or one that can stop refugees entering from our southern border from suffering unconscionable human right abuses such as family separations; or one that can end the many new forms of slavery that exist in our society for people of color, from slavery caused by predatory economic practices to our over-representation in this country's mass incarceration system. The Green Party's 2020 presidential nominee has to be more than just a one trick pony on the Green New Deal and the issue of renewable energy. People who aren't inheritors of white privilege are looking for more than just an end to the use of fossil fuels. They want their loved ones to stop coming home in body bags simply for being black in the wrong place at a white privileged time.

Our next nominee must be a champion for racial justice and the wider breadth of issues affecting Americans in these streets - in places like Youngstown, OH, Chicago, IL, and yes, Lansing, MI – the boyhood home of the great civil rights leader Malcolm X. And to echo his spirit, I say we must achieve justice for the disenfranchised in this country by any means necessary. The means before us as Greens is to recognize that we are more than just an environmental party, that we must place at the forefront our 2020 campaign our party's longstanding and robust platform for racial and social justice issues.

The Green Party is the party of justice - everything we do, including the sense of justice we seek for the Earth itself, emanates from that spirit. We need a presidential nominee who reflects that spirit. Our country, oppressed far too long by racism, corporate injustice and environmental abuse, is truly hungry for that kind of change.