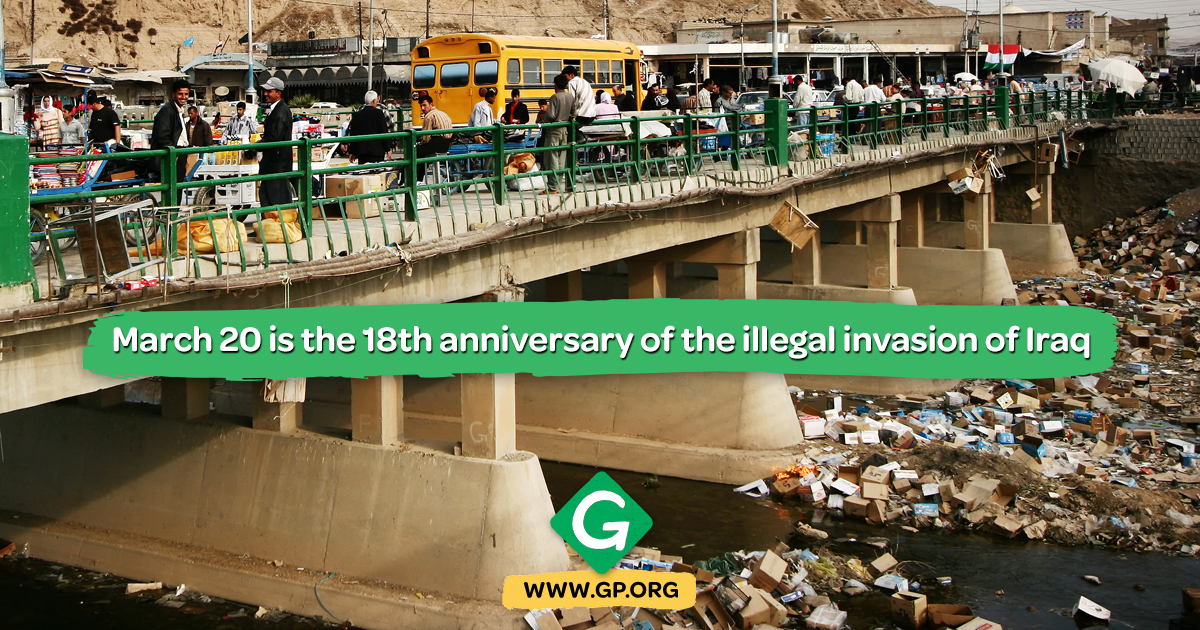 March 20th is the 18th anniversary of the illegal invasion of Iraq and this webinar takes this opportunity to consider critically important questions about US war policies.

Round 2 of the reconstituted “war on terror” began following the 9/11 attacks. What began as an invasion of Afghanistan in late 2001 has developed into a massive network of counterterror operations in more than 70 countries. Trillions of dollars and innumerable lost and disrupted lives later – what do we have to show it and where are we heading?

For the 18th anniversary of the invasion of Iraq, this webinar offers an opportunity to analyze Round 2 of the reconstituted “war on terror” which began following the 9/11 attacks. What started as an invasion of Afghanistan in late 2001 has developed into a massive network of counter-terror operations in more than 70 countries. Trillions of dollars and innumerable lost and disrupted lives later –

Our panelists will consider these critically important questions and more. A question and answer period will follow the presentations.

This event is open to all and free, advance registration is required.

Madelyn Hoffman will bring us up-to-date on the wars in Afghanistan, Iraq, Syria and Libya and discuss how we might go about getting out of these conflicts.

Ajamu Baraka will speak on the state of the U.S. Empire.

Cindy Sheehan will update us on the question she has been asking since her son was killed in Iraq: "What noble cause?"

Howard Switzer will explain the financial incentives inherent in the post-9/11 wars.

Michael McPhearson will describe what these wars are like on the ground.

Howie Hawkins will suggest steps for reducing the role of militarism in US foreign policy.

The forum will be moderated by Ryan Swan, a California member of the GPUS Peace Action Committee.

Ajamu Baraka Is a geopolitical analyst, organizer, writer, and human rights defender with over 48 years of movement work in the U.S. and internationally. Ajamu is on the Executive Committee of the U.S. Peace Council, the leadership body of the United National Anti-War coalition, the steering committee of the Black is Back Coalition and National Organizer for the Black Alliance for Peace. He is an editor and contributing columnist for the Black Agenda Report and contributor to a number of news and opinion outlets. He was awarded the US Peace Memorial 2019 Peace Prize and the Serena Shirm award for uncompromised integrity in journalism. In 2016 Baraka was the Green Party’s Vice-Presidential candidate with Jill Stein in the 2016 presidential race.

Howie Hawkins is a retired Teamster in Syracuse, New York who has been active in movements for peace, justice, labor, and ecology since the 1960s. A co-founder of the Green Party, he was the party’s candidate for president in 2020.

Michael McPhearson is a U.S. Army CPT veteran and human rights & anti-war activist. He works in many movements including the Movement for Black Lives. He is a former director of Veterans For Peace.

Cindy Sheehan is a peace and social justice activist who came to international prominence in the summer of 2005 when she set up an antiwar camp in Crawford, Texas---named after her son Casey who was killed while being used in Iraq on 04/04/04. Cindy has three surviving children, and five grandchildren and has published seven books.

Howard Switzer is a Tennessee architect and ecological design consultant on energy efficient, healthy homes of natural materials and on pre-industrial building methods. He has run for political office: Governor of Tennessee twice and for Congress once. He is a founding member of the Nashville Peace and Justice Center and GP Moving the Money to Main Street Campaign, which was adopted by the GPUS in 2007. He has presented on monetary reform at GP National Meetings and has often been invited to present at the annual international conferences of the American Monetary Institute. He is a founding member of the Green Party of Tennessee, the Green Party of the United States, and the Banking and Monetary Reform Committee (BMRC) of GPUS. He is a founding member of Greens for Monetary Reform and the Alliance for Just Money, is on their board of directors, a member of the International Movement for Monetary Reform (IMMR).