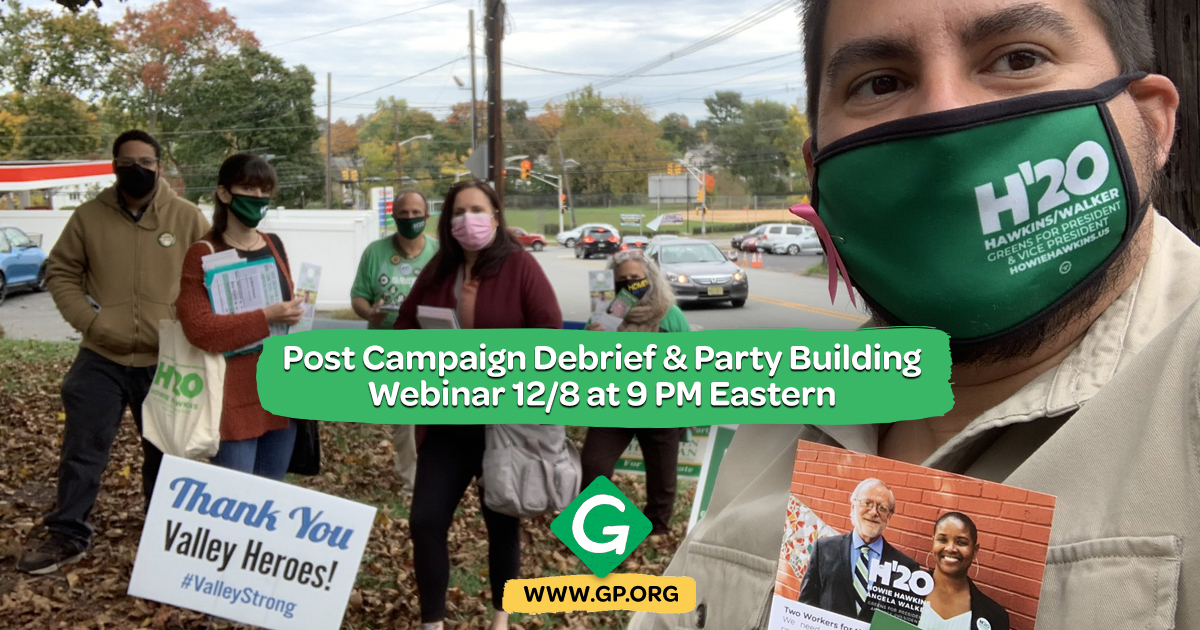 Planning how to wind down and debrief your run for office is an integral part of your campaign. Turning that energy and momentum into local party building will help build future campaigns.

This session will focus on:

This call will be facilitated by Gloria Mattera and Michael O'Neil.  Gloria Mattera is currently a co-chair of the Green Party of the United States as well as a co-chair of the Green Party of New York.  Gloria has been a Green Party candidate a total of four times, twice for City Council, Brooklyn Borough President and Lt. Governor along with Howie Hawkins in 2010 when GPNY regained their ballot status. Gloria has worked on numerous local, state and national Green Party campaigns during her 20 years in the party including the Hawkins Gubernatorial 2014 & 2018 and as Deputy Campaign Manager for Stein/Baraka in 2016.  Michael O'Neil is the GPUS Communications Manager. Michael has over fifteen years of political communications experience, with twelve of those spent with the Green Party in everything from street canvassing to national press relations. Michael served as staff on three successive New York gubernatorial campaigns. In 2016, Michael was hired as the Assistant to the Campaign Manager of the Jill Stein/Ajamu Baraka campaign, co-managing the campaign's Brooklyn, NY office and producing events and livestreams.

RSVP below to get the call-in details. The call-in details will be emailed as part of an auto-response to your RSVP and will go to the address we have on file for you. If you uncheck the "send me email updates" box, you will not receive the call-in instructions and you will be unsubscribed from all GPUS communications.

If you do not receive the details, please check your spam/promotions folder and if you still do not have them, email [email protected].
46 RSVPS