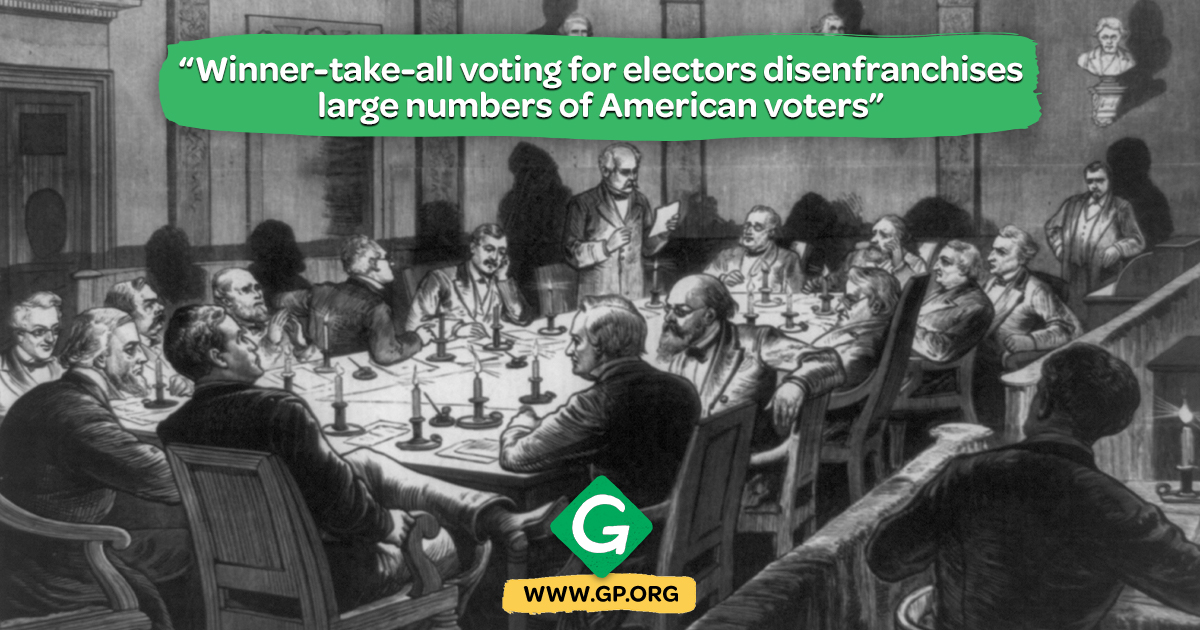 The Electoral Commission holding a secret session by candle-light, on the Louisiana question, February 16, 1877.

After nearly a century, U.S. government was compelled, thanks to the civil rights movement, to enforce Section 1, the equal protection provision of the 14h Amendment. But Section 2 has remained unenforced.

According to Section 2 of the 14th Amendment, Representatives shall be apportioned among the several States according to their respective numbers, counting the whole number of persons in each State.... But when the right to vote at any election for the choice of electors for President and Vice-President of the United States, Representatives in Congress, the Executive and Judicial officers of a State, or the members of the Legislature thereof, is denied to any [citizens qualified to vote], or in any way abridged,... the basis of representation therein shall be reduced in the proportion which the number of such male citizens shall bear to the whole number of male citizens twenty-one years of age in such State.

Winner-take-all voting for electors disenfranchises large numbers of American voters. Up to 49% of a states voters may be disenfranchised, since all of a states several electors are chosen by the political party of the winning candidate.

The Congressional Research Service report entitled The Electoral College: Reform Proposals in the 107th Congress (Order Code RL30844: Updated March 29, 2001) includes the observation that By awarding all electoral votes in each state to the candidates who win the most popular votes in that state, the winner-take-all or general ticket system effectively disenfranchises everyone who voted for other candidates. Moreover, this same flawed arrangement is the centerpiece of one category of electoral college reform proposals, the Automatic Plan.

Section 2 of the 14th Amendment calls for a penalty to be exacted on a state that would deny or abridge in any way citizens of the United States right to vote at any election for the choice of electors for President and Vice-President of the United States. In exacting a penalty for disenfranchisement, this section confirms that all votes must be counted and counted fairly.

Section 2 of the 14th Amendment contradicts the Supreme Courts Bush v.Gore ruling. In the 2000 voting scandal in Florida, manipulation of the national election in Florida by Republican Party officials received the Courts sanction, when the Court ruled that The individual citizen has no federal constitutional right to vote for electors for the President of the United States. In Florida, a class of citizens was disenfranchised, throwing the total of the states Electoral College votes to George W. Bush in violation of Section 2 of the 14th Amendment to the Constitution of the United States of America.

The Douglass Institute of Government, the D.C. Statehood Green Party, and the Green Partys national Black Caucus have already called for reform of the Electoral College.

According to the Congressional Research Service (CRS), On December 29, 2000, [Gordon] and Lawrence D. Jamison, members of the Douglass Institute of Government and residents of the District of Columbia, filed suit (Gordon v. Albert Gore, Jr., President of the U.S. Senate (1: 00CV031 12)) in the U. S. District Court for the District of Columbia to enjoin Al Gore, then President of the Senate, from counting the full slate of Floridas presidential electoral votes in Congress on January 6, 2001. DIG claimed that to allow Floridas full slate of presidential electors to be counted would have diluted and diminished the rights of presidential electors from states that have conformed with the 14th Amendment. (CRS report on The Voting Rights Act of 1965, As Amended: Its History and Current Issues (Order Code 95-896 GOV); prepared for members and committees of Congress)

The Statehood Green Party Platforms section on election reform states We demand that the District of Columbia replace the winner take all method of apportioning presidential electors which effectively disenfranchises votes for all runner up candidates with a requirement that electoral votes shall be divided in proportion to the popular vote for each candidate. Proposal

The Green Party of the United States supports efforts to address presidential Electoral College abuses, democratize the electoral process, and ensure that voters enjoy equal protection and treatment in their representation by the Electoral College.

The Green Party calls on the U.S. government to enforce Section 2 of the 14th Amendment to the Constitution, which was originally intended to correct the disenfranchisement of African Americans following emancipation. This Amendment is a mandate for the reduction of state representatives to the United States Congress and the Electoral College, proportionate to the disenfranchised class of its citizens deprived of the Constitutional right to vote in national elections.

The Green Party demands that apportionment of Electoral College votes reflect the actual votes within states. The Green Party holds that awarding Electoral College votes on a winner-take-all basis constitutes an unconstitutional abridgment of the right of all American citizens to have their votes counted, effectively disenfranchising them and violating Section 2 of the 14th Amendment.

The Green Party of the United States encourages all public policy organizations and political parties that champion democratic electoral rights to support this demand and affirm that every vote be counted.

Graphic courtesy of the Library of Congress