From Earth Day to May Day and Beyond: Protect Rights, Stop War 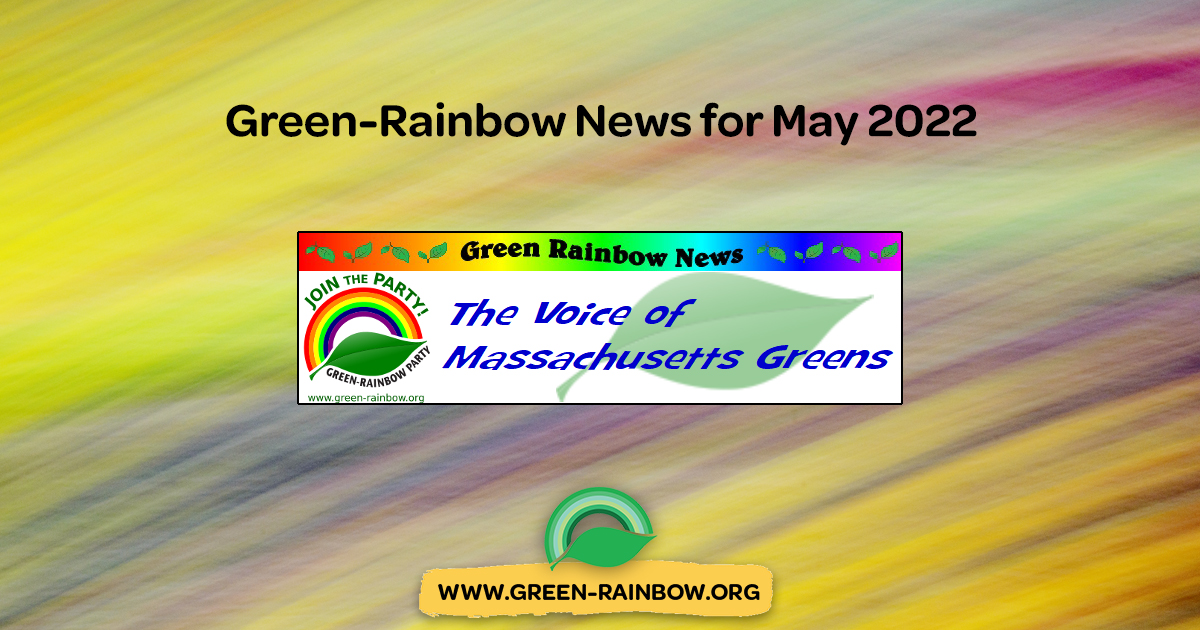 SOUTH DEERFIELD, MA – On April 24, State Committee members voted unanimously to endorse and nominate current Becket Town Select Board member Michael Lavery as the GRP candidate for State Representative in the 3rd Berkshire District. They also endorsed and nominated two experienced campaigners from Holyoke to run as a slate of nominees for statewide constitutional offices: Juan Sanchez will make his second consecutive bid to unseat the long-serving Secretary of the Commonwealth and Gloria Caballero Roca will contend for the open position as State Auditor.

All three candidates gave remarkably cogent and issue-filled campaign speeches. 2022 promises to be an excellent year for Green-Rainbow electoral work in Massachusetts. Volunteers will have a wide variety of opportunities to participate in these campaigns.

In the months to come, be on the lookout for upcoming messages about how to join the slate nominating petitions signature-gathering effort, to make financial donations to the three candidates’ committees, and to put forth your own innovative ways of promoting our candidates and Green-Rainbow solutions to our state’s challenges.

Green-Rainbow politics have always been about hope. And with the candidacies of Gloria Caballero-Roca and Juan Sanchez, there is hope that the values of our party will continue to inspire more citizens to take interest in our progressive vision for the state and our planet ... Continue ...

Michael Lavery is more concerned with being judged on his actions than his words. So as his campaign for State Representative in the 3rd Berkshire District begins to gain traction, the 51-year-old Green-Rainbow candidate can point to what he’s accomplished in his two terms on the Select Board of Becket, Massachusetts. When Lavery says he stands for a Green future, he can prove it by making reference to his past ... Continue ...

Greens from across Massachusetts joined nearly 200 activists at Park Street Station on Earth Day. They demanded immediate action on the converging crises threatening our survival on the planet - climate collapse, endless war, crushing inequality, and an assault on democracy ... Continue ...

The Ugly War in Ukraine is Not New

The State Committee of the Green-Rainbow Party passed the proposal "The War in Ukraine Began With a US-backed Coup in 2014" by more than the required two-thirds majority at its first installment of the Spring meeting ... Continue ...

Assault on Assange Continues As More Press is Muzzled

Congress shall make no law respecting an establishment of religion, or prohibiting the free exercise thereof, or abridging the freedom of speech, or of the press, or the right of the people peaceably to assemble, and to petition the Government for a redress of grievances." 1st Amendment of the US Constitution ... Continue ...

From Environmental Action to Labor Rights Action, The People are Rising

The world is rushing headlong towards self-destruction: war, environmental collapse, radically increasing poverty, self-serving vs people-serving leaders. We must look beyond the mirage of propaganda to save ourselves and the planet. We will find the facts in the mainstream media. All the more reason to tune into Green Voices. Following are a few examples: ... Continue ...

AD Makepeace Corporation, headquartered in Wareham, is the largest private property owner in eastern Massachusetts. The corporation uses cranberry growing as cover for clear-cutting hundreds of acres of mature forest, extracting gravel and sand in strip mines, and installing toxic industrial solar arrays on arsenic-treated poles in delicate pine barrens. Jim Kane, as President and CEO of Makepeace, is being awarded the Private Company Board of the Year Award by the National Association of Corporate Directors- New England on May 4 in Boston's Westin Seaport District Hotel ... Continue ...

The Green-Rainbow Party supports the Green Party of ST Louis' program on Wed., May 4th at 8 PM ET. Topics include:

What does the Ukraine War tell us about the challenges of humanity’s urgent need to reduce fossil fuel usage? How does the war reflect colonialism and racism? How well is President Zelensky coping with opposition political parties and the Azov Battalion? Join us for a discussion of Ukraine’s history, Joe Biden’s role in that history, the 2014 coup, the risk of using nuclear weapons, and NATO's actions, as well as how the media affects our perceptions of the war. What is key to bringing peace to Ukraine?

Please register for the program when you receive this. Registration details: The webinar is NO COST, but you need to REGISTER to attend.

After registering, you will receive a confirmation email containing information on joining the meeting.

Rally May 7 for Peace in Ukraine

Join the Global Day of Action

Code Pink, MAPA, and the Green-Rainbow Party call for rallies before the NATO Summit in Madrid on June 29th. Join us on May 7th. Not one more life for imperial war!