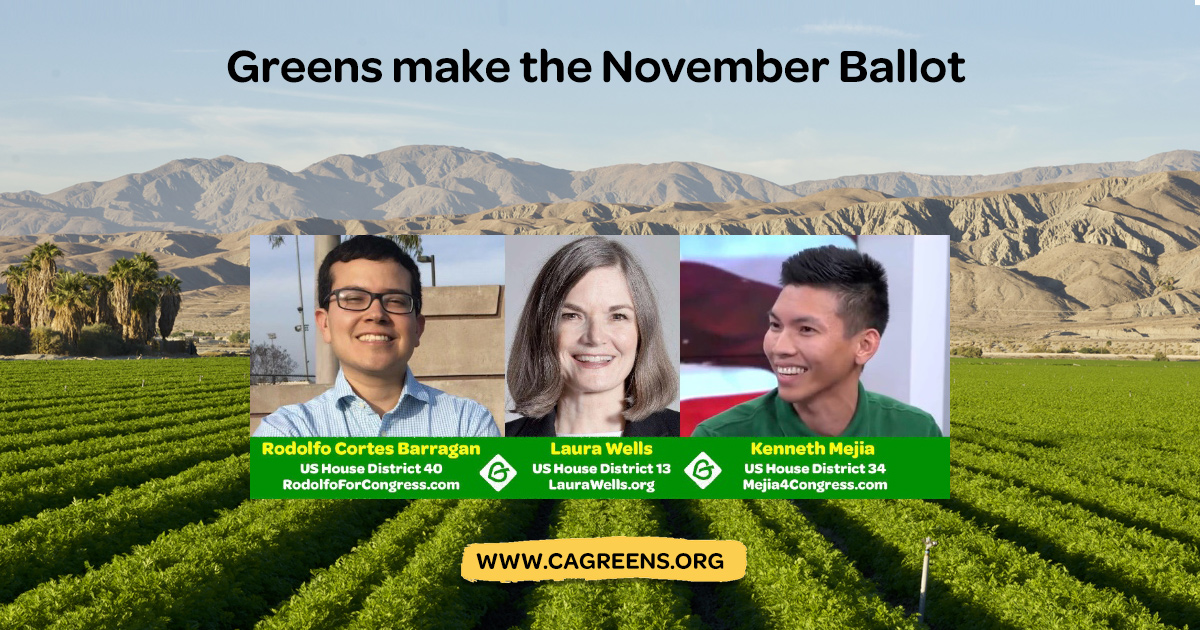 I am thrilled to be partners with two Green Congressional candidates from Los Angeles. All three of us are running against incumbent Democrats, with no Republicans in the race. Please read an inspiring message from Jill Stein below. We can all raise our expectations, and pressure Washington to provide what we want and need!

A Message from Jill Stein

As we approach the 2018 midterm elections, humanity and the planet hang in the balance as never before - with endless war, climate chaos, massive racial and economic inequality, the growing nuclear arms race, the assault on refugees and more.

The good news, of course, is the inspired grassroots revolt against this crisis, a revolt against not only Donald Trump, but the whole bipartisan neoliberal system spreading injustice and violence the world over, paving the way for demagogues like Trump to seize power in the first place.

We need a revolution for people, planet and peace over profit like never before - which is why I’m helping to start Green Uprising, a new vehicle for action to turn resistance from the last election into rebellion in the next!

To jumpstart the Green Uprising, I urge you to join me in supporting three powerhouse California candidates for Congress who successfully fought their way to a top-2 position in California’s primary - a historic first for Greens!

These candidates are in one-on-one challenges against incumbent Democrats in progressive districts where working people and frontline communities have been devastated by the failed status quo.

Any support you can give right now – whether $5, $50, or even $500 – will help power up a Green breakthrough by Kenneth Mejia, Laura Wells and Rodolfo Cortes Barragan!

Kenneth Mejia is running to represent the 34th Congressional district of California. The son of a first-generation immigrant single mother, he graduated college at age 20 and landed an accounting job in the finance world. Inspired by Bernie Sanders, he then left his comfortable position to become a grassroots organizer in Los Angeles. He made his #Demexit after the DNC and is now leading the charge of young LA rebels into the Green Party.

With hundreds of volunteers on board, Kenneth's troops are knocking on thousands of doors, phone-banking, and getting the word out as we speak. With your help, he has a real shot at winning.

For example, if Kenneth could raise an additional $5,000, he could afford to expand his outreach with a mailer to every voter in his district and supercharge a rebellion that’s already underway. You can support Kenneth from wherever you are by donating or signing up as a volunteer to phone bank!

Laura Wells is running to represent the 13th Congressional district of California, one of the most progressive districts in the country. A former candidate for Governor who was arrested trying to attend a debate in 2010, she is running to challenge a system that refuses to provide basic human needs in the richest country on Earth.

Laura’s message is simple and compelling: “Imagine having Greens in Congress, not beholden to billionaire and corporate donors, enacting Green New Deal solutions so that everyone has the basics. We all know where the money can be found to fund housing, healthcare, education, and a clean environment: tax the rich and stop the wars!”

As the only challenger in this 1-on-1 race, Laura is calling for a debate with the incumbent. In a country that claims to be a democracy, it’s hard to imagine a more reasonable demand.

Laura Wells’ campaign is lifting up the Green Party as a rising force in California by bringing common sense Green ideas to thousands of voters - please contribute to Laura’s campaign today to help her raise the bar and demand a Congress that puts people over profit!

Another Green powerhouse, Rodolfo Cortes Barragan, is running for Congress in California’s 40th district. Challenging a 25-year incumbent who inherited the seat from her father, and who isn’t even campaigning, Rodolfo also has a real shot at an upset victory!

Here’s why Rodolfo's race is winnable: When voters in the 40th District hear about the incumbent’s votes to expand ICE and boost military spending while their human needs are neglected, they switch their vote to Rodolfoover 90% of the time.

If Rodolfo could raise an additional $5,000, he could hire organizers to support his growing band of volunteers for phone banking and canvassing. Will you support Rodolfo’s campaign by contributing or volunteering today?

With your help, Rodolfo, Laura and Kenneth can change the shape of politics forever - with an agenda for healthcare and education as human rights; an emergency Green New Deal to create millions of good jobs, turn the tide on climate change and make wars for oil obsolete; a welcoming path to citizenship; free college and a bailout for student debt; and a shift in budget resources from catastrophic wars abroad to human needs at home.

A victory for Kenneth, Laura or Rodolfo will send shockwaves through the political establishment and fire up the Green Uprising whose time has come.

Please pitch in whatever you can to these three breakthrough candidates, Rodolfo Cortes Barragan, Laura Wells and Kenneth Mejia. You can make all the difference in this historic moment, to tip the balance towards a Congress, a nation, and a world that works for us all.

More than ever, the power to create that world is in our hands!
Jill Stein