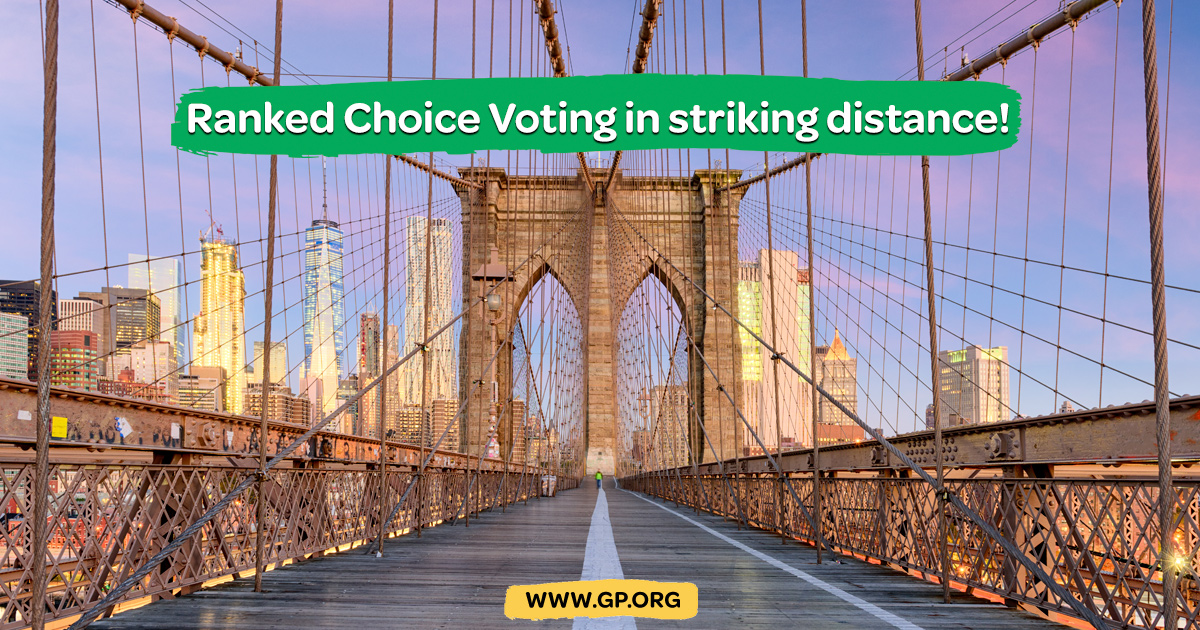 Great news for democracy: the momentum for Ranked Choice Voting in New York City elections is growing! But to make sure city government listens to the call to fix our broken voting system, your voice is needed now.

Ranked Choice Voting (RCV) supporters made a strong showing at the recent City Council Charter Commission hearings in all five boroughs. But some groups have lobbied to use RCV only for primaries and special elections - not the general elections where most people vote. In reality, there’s no good reason to withhold RCV from general elections.

RCV opens up political choice at a time Americans are hungry for more of it. RCV lets you rank your choices instead of voting for just one candidate. If your first choice loses and there’s no majority winner, your vote is automatically re-assigned to your second choice. This makes it impossible to “split the vote” or “spoil the election” and ensures the winner has majority support. It also brings more voices and viewpoints into our elections, and makes ”lesser evil” voting obsolete.

So far, most of the grassroots testimony has supported using RCV in all NYC elections. You can help make sure the Charter Commission gets the message by submitting comments in writing, calling for NYC to upgrade to Ranked Choice Voting in all elections!

The deadline to submit your comment is Friday, May 24.

Getting RCV passed in New York City wouldn’t just be a win for voting justice in NYC - it would make waves across the country at a time when people are clamoring for fair elections and a better democracy. Be a part of the movement - tell the City Charter Commission it’s time for RCV in NYC!

Thank you for all that you do to build the movement for election protection and voting justice.

It’s in our hands!
Jill Stein

Voters rank candidates in their order of preference (1st, 2nd, 3rd, etc.). If a candidate has more than 50% of the first choice votes, they win immediately.

If no candidate gets a majority of the #1 votes, then the candidate with the fewest first choices is eliminated, and voters who selected that candidate as their 1st choice will have their votes re-allocated to their 2nd choice.

This process continues until one candidate has a majority of the votes.

WHY RANKED CHOICE VOTING IS BETTER

With RCV, you don’t have to worry about “spoiling” an election, “wasting your vote”, or “splitting the vote”. You can vote for whoever you support, and if that candidate doesn’t win, your vote then counts for your next favorite candidate.

To win, candidates need support from a majority of voters - that means no more candidates winning with 45% of the vote or less, which happens frequently in the current system.

RCV encourages more positive, issue-focused campaigns, because candidates have an incentive to appeal to other candidates’ voters.

RCV is used in the state of Maine and over a dozen US cities. Research has found that voters in areas that use RCV prefer it to the current US voting system.

For more information, visit VotingJustice.us, which brings together critical information and resources about the ongoing work of the recount effort, as well as the broader movement for election protection and voting justice.