Ranked Choice Voting May Come to New York City ... But Not for Everyone 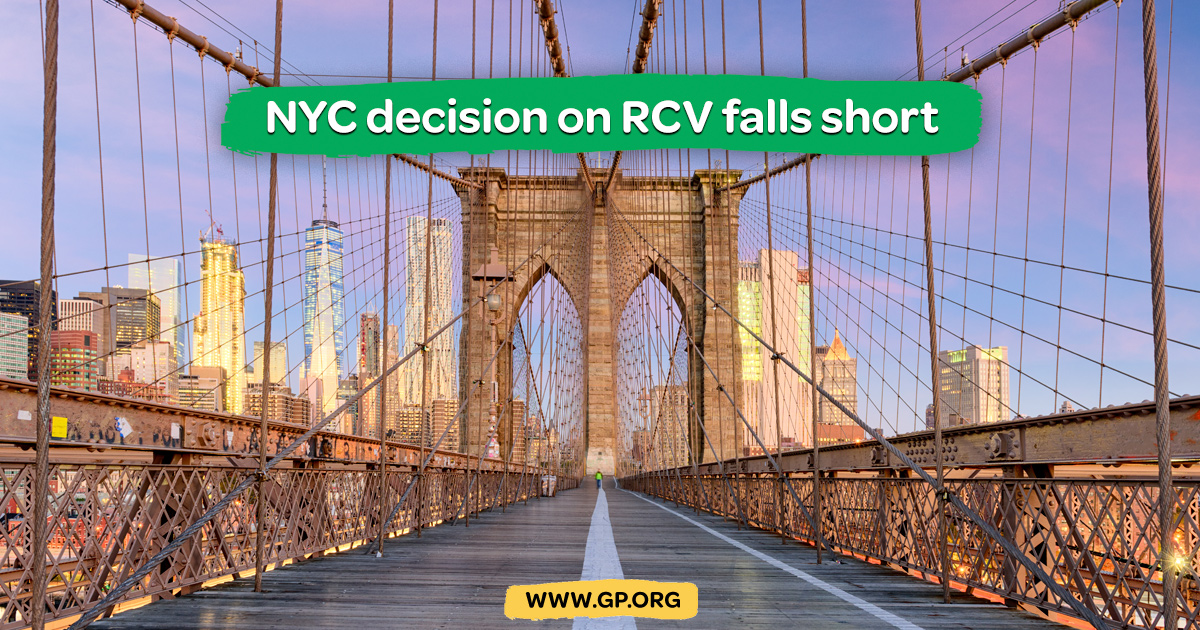 Party officers also said they were disappointed in the position taken by Common Cause, which only advocated for RCV in primaries and special elections. The party said this was a puzzling stance for a so-called "good government" group to take, and made it seem like they were working for Democratic Party incumbents instead of the public interest. Party officers said they would encourage voters to support the fall ballot measure that would allow RCV in primaries and special elections because it can serve as a building block for extending RCV to general elections.

"The Green Party thanks the commissioners who supported ranked-choice voting for all municipal elections," commented GPNY co-chair Gloria Mattera, who lives in Brooklyn. "Despite overwhelming testimony supporting RCV for all elections, some Democrats and influential special interests focused only on RCV as a cost-saving measure to eliminate the need for a runoff election if a candidate in a municipal, citywide primary fails to surpass 40% of the vote. Others claimed that 'fusion' would combine poorly with RCV, which allows one of the worst aspects of New York political culture to stymie real innovation. It also ignores that, from 1936-47, New York City used a proportional form of RCV — and it worked."

"If RCV is limited to only municipal primaries and special elections, it will largely benefit the Democratic Party which by far has the largest enrollment citywide. Independent voters, who represent the second largest enrollment bloc in New York City, will largely be denied the potential benefits of RCV. Republicans, who have the third largest enrollment, also stand to gain more from RCV in general elections. Greens, Libertarians and other third parties who don't often hold primaries, will also generally be denied the chance to equally benefit from RCV. We agree with Commissioners Albanese and Fiala, who said if RCV is good for some elections it should be good for all of them," commented GPNY co-chair Peter LaVenia. The commissioners who supported RCV for general elections were appointed by four of the five Borough presidents, one appointed by the former public advocate, and one appointed by City Council Speaker Corey Johnson. Those who opposed it included the four appointed by Mayor Bill de Blasio, three appointed by Speaker Johnson, and one appointed by NYC Comptroller Scott Stringer.

Six commissioners voted in favor of the amendment to include RCV in general elections:

Eight commissioners voted against the amendment to include RCV in general elections: