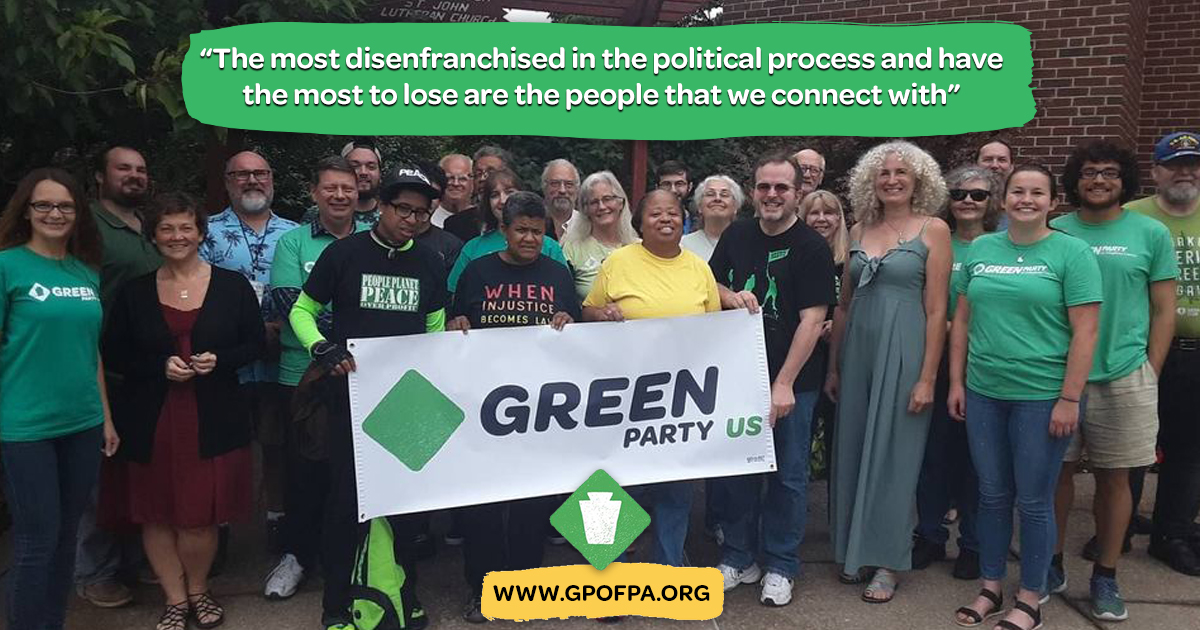 Democrat and Republican. Liberal and Conservative. Left and Right. The United States is dominated by a bipartisan system. These two poles vehemently oppose each other, demanding that citizens choose a side. The media perpetuates this bipartisanship, almost exclusively covering these two parties. Yet, more than 60 other political parties are currently active throughout the country. Some of them, such as the Libertarian and Vermont Progressive Parties, are represented in Congress or state legislators. Others, such as the Green Party, have representatives serving at the municipal level.

The Green Party has been active internationally since 1972, but it was not officially established in the U.S. until 2001. The party now has members in more than 90 countries, and in the U.S., membership includes more than 150 elected Greens and almost 200 running in 2020. Most states have a Green Party, but whether those state parties are officially recognized or not depend on state laws.

A grassroots organization that stands for the health of the planet and future generations, the Greens base all their actions on four pillars: peace, ecology, social justice, and democracy. These pillars relate to their 10 key values, including decentralization, respect for social justice, and feminism and gender equity. They aim to end the country's two-party system and the control by the one percent.

I recently spoke over the phone with Runkle about his experience working with the media and campaigning as a third-party candidate. We began by discussing whether he feels as though the media is stacked against him and the Green Party.

"Yes and no," he said. "In one sense, you really need to do the work in order to get the attention. People can't sit and complain that they don't get the spotlight if they are not out there running strong campaigns or doing something to get attention."

But even when the Greens are doing that work, the media are difficult to break into. Runkle noted that the media seems to have its own agenda, which they know will provide them with successful stories.

"In that sense, it probably is rigged in a certain way that's not to our benefit or to the ordinary person's benefit," he said. "The media, especially the national media, is its own machine with its own functions."

Thus, obtaining a seat at those media tables is incredibly difficult and can be quite frustrating. As Runkle mentioned, both the Democratic and Republican parties have been established for many years. They have strong connections with the media and long contact lists. Third parties like the Greens do not have that advantage.

"That's a challenge and a frustration," said Runkle of this disadvantage, "because you know right off the bat that there's a step above you that you just won't be able to attain when you don't have the brand recognition."

Locally in Pennsylvania, the Greens have some of this brand recognition thanks to both the work they do and their elected officials. Nationally, though, Runkle would like to see a lot of reform, starting with the presidential debates. He described the Commission on Presidential Debates as "an awful mess of partisan folks that have no interest in including any outside opinion." Instead of the Commission, he would love to see control turned back over to the League of Women Voters who previously included third-party candidates.

Runkle would also like to see a change to publicly funded elections, as well as the overturning of Citizens United vs. Federal Election Commission. He said the Supreme Court's 2010 controversial decision "basically made money equal to free speech and allows for unlimited spending by super packs and candidate-affiliate packs." He contends that these elements prevent candidates without loads of disposable money to fund their campaign from gaining exposure and attention.

So, without this money and the media contacts, how does the Green Party drive awareness to their platform and candidates? The answer stems from the Greens' grassroots approach.

"In our view, there's really only one way to do it, and that's to be connected to your community, in particular, frontline communities," said Runkle."The folks that are most disenfranchised in the political process and have the most to lose are the people that we connect with."

Over the past few months, the Green Party has sent representatives to Philadelphia's homeless encampment, which was formed because of the pandemic. Yet, these representatives were not necessarily there to gain recognition or register party members.

"We understand that the community, when they are self-empowered, will move forward on actions on their own," Runkle said."If they see the Greens as a vehicle to do that, that's important for our growth but more importantly for their growth."

The Party does similar work across Pennsylvania through public advocacy groups like Pittsburghers for Public Transit and March on Harrisburg. Unfortunately, this work is often done without drawing much public attention to the Greens. Runkle admitted that they could do a better job of raising awareness about these efforts by alerting the media with more than just their monthly newsletter.

Regrettably, the media coverage that the Greens do receive tends to be negative. For instance, earlier this year, the Democratic Party sued to remove the Green Party from the ballot, which delayed printing.

"We were getting media inquiries left and right over that," said Runkle."The New York Times, the Washington Post, we were on CNN. And that's the only time they really reach out to us, when it becomes a problem for the other two power parties."

Despite all these obstacles, the Green Party continues to run candidates, some of whom do succeed in getting elected. For example, in Philadelphia County, Green Party member Kristin Combs is serving as a Philadelphia Judge of Elections, and in Allegheny County, Jay Ting Walker is a Pittsburgh Inspector of Elections. Runkle explained that this success is thanks to good candidates, the Party's perseverance, and hard work.

"Having the right candidate is important, and you can do that by persistence," he said. "Candidates kind of pop up and are motivated for a multitude of reasons. The ones that are successful are normally the ones that have been doing the work in their communities for years."

He recalled a successful election year a while back when 19 out of about 25 Green candidates were elected. Though the numbers are small, the percentage is large, especially for the effort that they put in to make those wins happen. As the public witnesses these successes, he believes that "public attitude will change and get away from the dipoles and see that we have more options."

Other successes for the Greens have happened in court when they have challenged unconstitutional election laws. In 2006, Green Senate candidate Carl Romanelli was kicked off the ballot by Democratic candidate Bob Casey for not having enough signatures. But in addition to that expulsion, he was fined almost $80,000 to cover Casey's court fees. The Green Party took this to the U.S. Court of Appeals, where the court ruled that levying court fees is an obstruction to seeking public office.

In 2016, Green presidential candidate Jill Stein filed for a recount of presidential votes in three states, including Pennsylvania. Quickly, though, she dropped the Pennsylvanian case because she and the Greens determined that even if a recount was awarded, the votes would not manually be recounted. Instead, the votes would be run through the computer again, just as had been done before, producing the same result. Out of that case came changes to the Pennsylvania voting system, such as verifiable paper trails on all votes and upcoming election-result auditing.

Runkle admits that he does not know whether these cases helped the Green Party. However, he thinks they helped the public in general. "Those two cases weren't something that we did for ourselves," he said. "We did it for everybody, and it did overturn some unconstitutional election laws."

Runkle is seeing public attitude start to change, especially thanks to the upcoming presidential election. He mentioned that many more groups have been reaching out to the Green Party than in years past, looking for inclusion in the political process. Again, he referenced the League of Women Voters who are trying to include all candidates in local debates instead of just those from the left and right. Other groups have reached out to include the Greens in voter guides.

"I think that's a good thing," Runkle said about these changes. "Something to look forward to for our party and for everybody."

Hana Graybill is a senior studying communication at Drexel University. She hopes to pursue a career in corporate social responsibility, specifically working on community and employee engagement programs, after graduating in June 2021. This article was originally submitted as a course assignment that objectively assesses the Green Party's efforts to connect with the media and the public.