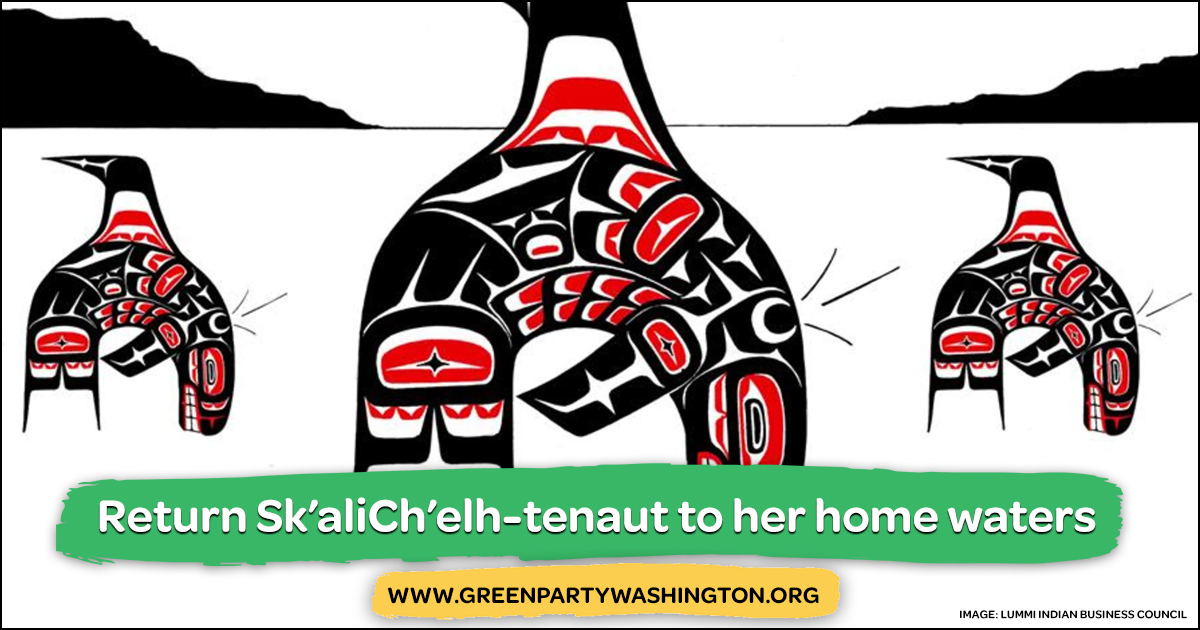 SEATTLE – The Green Party of Washington supports the efforts being coordinated by representatives of the Lummi Nation and others to return Sk’aliCh’elh-tenaut to her home waters of the Salish Sea.

Sk’aliCh’elh-tenaut is the Lhaq’temish (Lummi) Nation name for last remaining Southern Resident Orca to be held in captivity. She is also known as “Tokitae” or by her Seaquarium slave name “Lolita”.

In August of 1970, over 50 young orcas were violently stolen from the Salish Sea and sold to aquariums.

Large pods of orcas were once rounded up in the waters of Washington State and their young ones kidnapped. Several died during capture and transport. In 1971 whaling was outlawed in the US. Only one of our resident L pod orcas remains alive in captivity. Her name is Sk’aliCh’elh-tenaut.

For over 50 years, Sk’aliCh’elh-tenaut has been held at the Miami Seaquarium, in the world’s smallest orca tank. There, in the state of Florida she is subjected to cruel and unnatural conditions, including relentless sun and heat, extreme social isolation, and exposure to dangerous hurricanes. She has not seen another orca in captivity since the 1980’s, as she is the sole survivor of the 45 orcas captured from the Southern Salish Sea in 1970.

Sk’aliCh’elh-tenaut has been sentenced to a life of unjust captivity and deprivation. We as Greens, call for a compassionate release. The Green Party wants her extradited from the state of Florida and brought back to her home waters. The Lummi Nation feels it is their sacred obligation to bring Sk’aliCh’elh-tenaut home. Orcas pods have distinct cultures and dialects. Tokitae still calls out in her native L pod language. Her mother is still alive. Bring her back home to her family.

We, the Green Party of Washington State, in representing ourselves, our memberships, and our constituencies, support the effort to bring Sk’aliCh’elh-tenaut [Southern Resident Orca] home. We call upon the Governors of Washington, Oregon, and California, and the Premier of British Columbia, the lands of which border the Salish Sea home of the Southern Resident Orcas, to sign a joint Proclamation that acknowledges the unique and iconic orca population here and the significant spiritual and cultural value for the people of the region, with protected legal rights to freedom from captivity.

Therefore, The Green Party of Washington State joins the Lummi Nation and others urging the Governors and Premier of our Southern Resident Orca territories to: