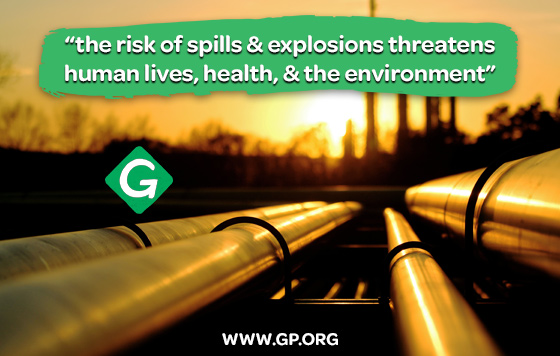 WASHINGTON, D.C. -- The Green Party is calling for mass public resistance in reaction to President Trump's announcement that he is permitting the Dakota Access and Keystone XL pipelines to move forward.

"Unfortunately, President Obama left the door open for a future president to resume the pipelines. In December, the Army Corps of Engineers announced that it would seek an alternative route. The Green Party calls new pipelines unacceptable and dangerous in the era of global warming," said Ms. Wilson.

On Tuesday, Mr. Trump signed executive actions to accelerate construction of the pipelines and expedite environmental review and approval for infrastructure projects favored by the oil industry.

Greens support public works projects to repair damaged roads, bridges, and other unsafe infrastructure, but insist that such repairs take into account environmental concerns, without promoting fossil-fuel extraction and consumption. The Green Party has called for a 100% fossil-fuel-free economy by 2030. (See the Green New Deal )

In 2016, Green candidates and activists joined members of the Standing Rock Sioux Tribe protesting construction of the DAPL less than a mile from their reservation. Among the Greens were presidential nominee Jill Stein and running mate Ajamu Baraka, who were charged for nonviolent civil disobedience, and U.S. Senate candidates Robin Laverne Wilson (New York) and Margaret Flowers (Maryland).

The proposed route of the DAPL endangers Lake Oahe, the reservation's main source of drinking water. The original pipeline route, across the Missouri River near Bismarck, was rejected because of concerns that it might contaminate the city's water sources and mostly-white residential areas.

"The pipelines are a danger both locally and globally," said Chris Blankenhorn, co-chair of the Green Party of the United States. "Locally, the risk of spills and explosions threatens human lives, health, and the environment, as numerous incidents have proved, most recently in rural Alabama with the explosion of the Colonial Pipeline in October 2016. Globally, pipelines contribute to the release of greenhouse gases that are heating up the atmosphere."

"Crude oil extracted from tar sands fields in Alberta, Canada, which the Keystone XL and Enbridge pipelines would transport across the U.S., is especially harmful. Pipeline construction and maintenance would provide few permanent jobs and would deliver the oil to ports for export -- not for domestic energy needs," said Mr. Blankenhorn, who will participate with other Illinois Greens in a rally against the pipeline in Springfield, their state's capital, on Saturday, Jan. 28 at 1 p.m. CT.

According to The New York Times, "The State Department estimated that Keystone would support 42,000 temporary jobs for two years -- about 3,900 of them in construction and the rest in direct support, like food service -- but only 35 permanent jobs."

7 hurt as pipeline explosion lights up the sky in Alabama
USA Today, October 31, 2016