Revisiting a Green New Deal for DC in 2022 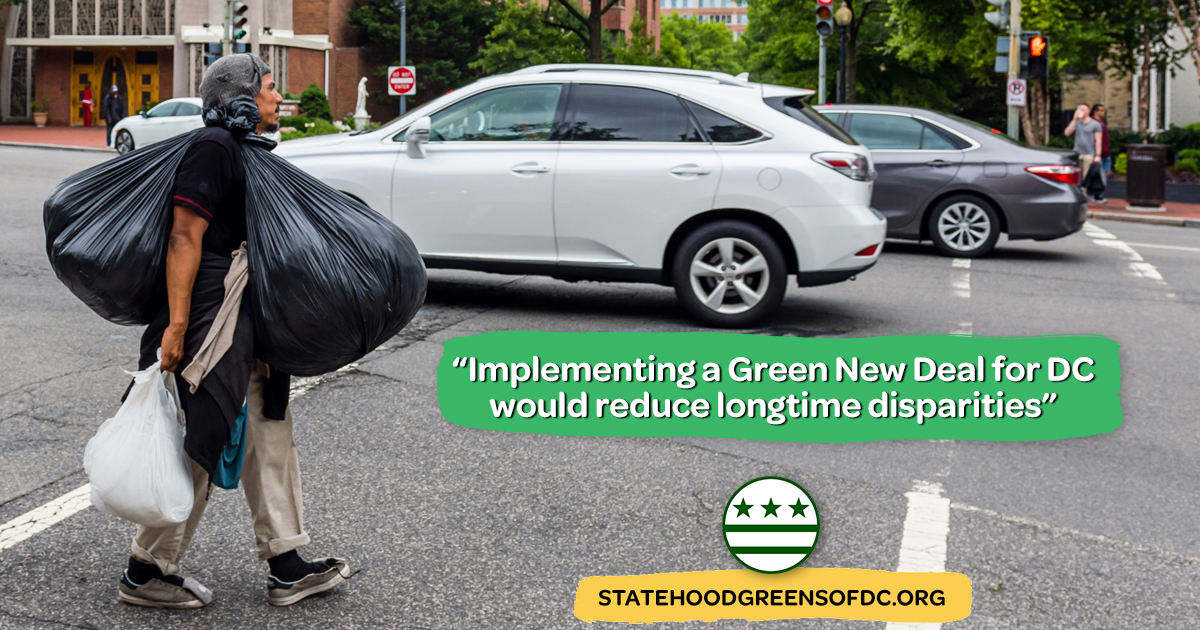 In the U.S., there is growing support for Green New Deal (GND) programs. Michelle Wu won election as mayor of Boston based at least in part on her invocation of a Green New Deal for her city.

DC is already a recognized leader for climate and clean energy programs such as Solar for All. But big challenges remain in reducing our substantial wealth and income inequality and the associated negative impacts on health, particularly for low-income residents. Trickle-down austerity budgets for the last 20 years have resulted in shockingly high racial and economic disparities, including income and wealth inequality, life expectancy, poverty (especially child poverty), and homelessness.

In 2016 DC had a bigger life expectancy gap between white and Black residents than any state in the nation: Black males in DC had a life expectancy 17 years shorter than white males; for Black females, it was 12 years less than for white females. These are increases from 2000, when the gap was 15 years for men and 10 years for women — a particularly telling change. Given the disproportionate death rate from COVID-19 of Black residents, this racial gap in life expectancy is almost certainly even greater today. This fact alone demonstrates the utter failure of the DC government’s trickle-down economic policies to address persistent racial and economic disparities. Robust evidence demonstrates that income inequality drives bad health.

Thankfully, last summer the DC Council — despite the initial opposition of Mayor Muriel Bowser and Chairman Phil Mendelson — took a historically important step in creating the capacity to address these disparities by hiking DC’s income tax rates for wealthy residents. This was a long-overdue overhaul of our tax structure that moves it toward more progressivity. Owing to broad community support, this legislation was passed unanimously without a mayoral veto. Make no mistake, this tax hike was a clear rejection of the long-standing agenda of the Federal City Council, the powerful lobby of the big corporate, banking and development sector; it may well be the first significant defeat of that agenda in many years, if ever. As such, it opened up a potential path to a just recovery that would make DC into a global leader among cities in environmental, economic and social justice.

While DC statehood remains elusive for now given the current political context, implementing a GND for DC in the meantime would reduce longtime disparities, empower the struggle for statehood, and create a more just foundation for the new state of Washington, Douglass Commonwealth.

In order to build a stronger and more assertive local movement, we need to center the ongoing struggle for economic, social and environmental human rights in DC. By doing so, we may be able to make the denial of our fundamental political rights even more of an embarrassment nationally and internationally — much as segregation and lynching were during the Cold War, leading to the Supreme Court’s decision in Brown v. Board of Education. We should take note of the truly visionary constitution of 1982, drafted by a convention of elected delegates and approved by DC voters. We must make sure that the same rights are included in any new constitution to be created by elected delegates at a convention no more than two years after achieving statehood (for more on this, see my video “Forward to a Just Recovery and DC Statehood!“).

What follows are potential initiatives that could be components of a GND for DC. It is important to recognize the interconnections between these projects and proposals, as well as the imperative of a broad, bottom-up process of review and participation in their implementation.

This is an ambitious array of proposals for a Green New Deal for DC, requiring considerable discussion and fine-tuning for implementation. However, initiatives addressing the health of DC residents — particularly children — and those already with pending legislation and existing support both deserve and need priority attention. There is a tremendous amount of untapped energy within our population that could be channeled toward creating a more just DC. I look forward to an ongoing dialogue that moves us toward that goal.