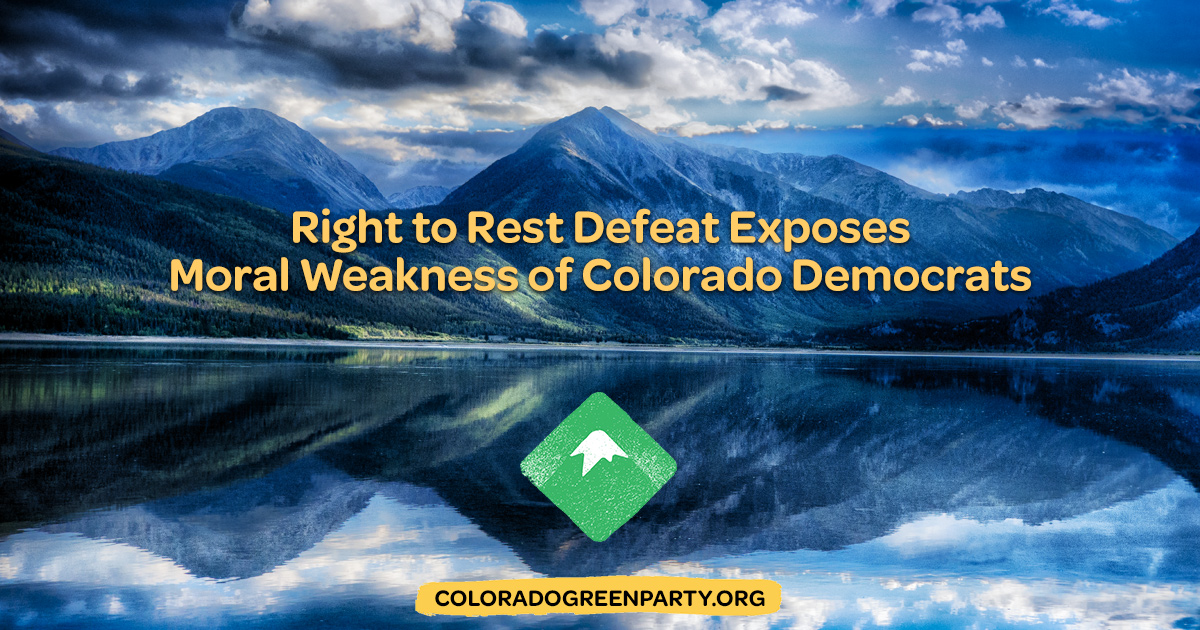 Denver, CO, March 16, 2018 -- Colorado Greens express outrage over the indefinite postponement of HB 18-1067, the Colorado Right to Rest Act, yesterday in the State House Local Government committee, effectively killing the bill via procedural motion. House Democrats were split over the motion to indefinitely suspend the bill.

"The Colorado Democratic Party's 2016 platform opposes criminalization of resting in public places," stated state party co-chair Andrea Merida. "Too many Coloradans live one paycheck away from economic catastrophe and subsequent homelessness. How long must they wait until the Colorado Democratic Party prioritizes basic human rights and withholds nominations of electeds who repeatedly ignore this moral imperative?"

HB 18-1067 would have established basic rights for persons experiencing homelessness, including the right to exist and rest in public spaces, to eat or accept food in any public space where food is not prohibited, to occupy a legally parked vehicle, and to have a reasonable expectation of privacy of one's property. State Representatives Dan Pabon (D - HD 4), Paul Rosenthal (D - HD 9), Donald Valdez (D - HD 62) and Matt Gray (D - HD 33) chose to break with their party's platform and vote with House Republicans to kill the bill in committee.

"Two hundred thirty seven people died on the streets in Denver in 2017, an increase of nearly 25 percent from 2016, and any deaths of homeless residents that die between now and the next hearing will to be on their hands. The legislature must act to guarantee basic human rights to all." said Dave Bell, state party co-chair.

The Green Party of Colorado (GPCO) is recognized by the Colorado Secretary of State as a minor political party and qualified for statewide ballot access in 1998. GPCO is Colorado's largest anti-capitalist and anti-oppression party and prioritizes people, peace and planet over profit.