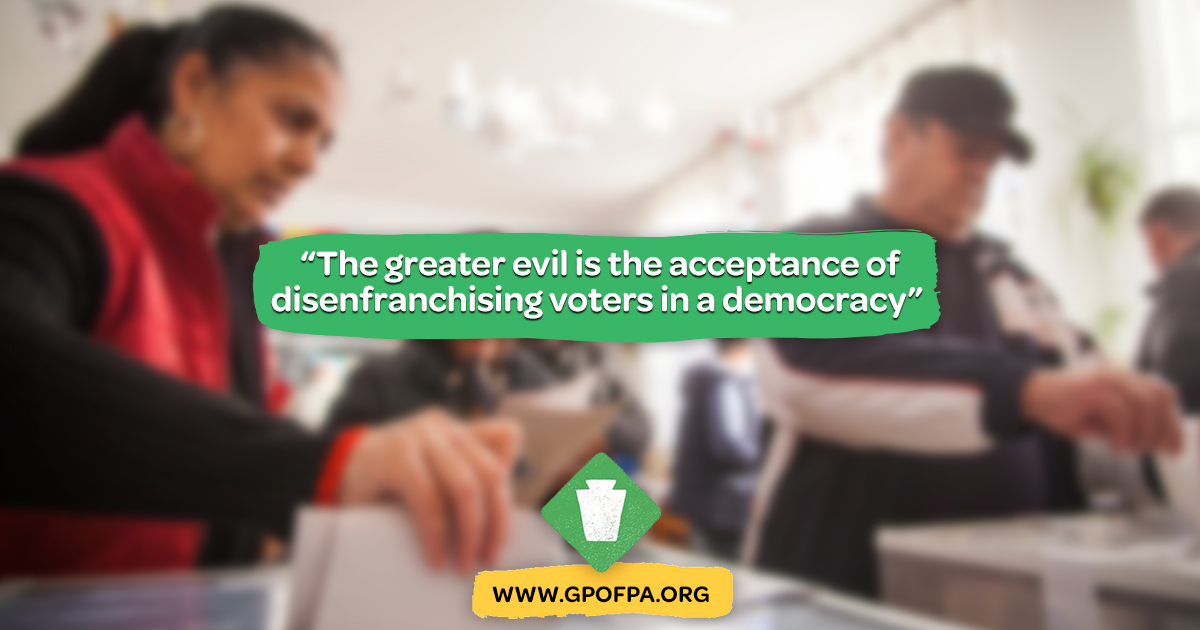 "The extensive bureaucratic processes to run for office or even get on the ballot are designed to keep everyday people disempowered and discouraged. If we want to live in a truly representative democracy we must push to eliminate these voter suppression techniques built into the system. We must rally to end these Jim Crow like processes so that the Commonwealth of Pennsylvania will have true freedom of choice and will not be ruled by a corporate club. As it stands now there is no integrity to our elections. They are fraudulent."

In May, during statewide stay at home orders, the GPPA, along with the Libertarian and Constitution Parties, filed a petition for relief of candidate signature requirements. Much of the valid period for collecting signatures overlapped the COVID-19 pandemic and safety of petitioners was a big concern. The petition for waiving the signature requirement was denied, with the argument that the deadly pandemic did not constitute a “burden” for getting on the ballot.

Despite the pandemic, Green Party volunteers came out in force and gathered 170% of the required signatures, successfully qualifying all state candidates for the ballot.  Almost immediately, the Democrats attempted to remove ALL Green Party candidates from the ballot by challenging 8,159 of the 8,551 signatures and citing irregularities in the nomination paperwork. This required a costly defense by the GPPA, a defense that was paid almost entirely by donations of individual voters.  A detailed analysis showed nearly every signature to be valid and testimony from the State showed that GPPA had submitted their paperwork as directed during a period when State offices were closed, and normal, in-person submission processes could not be followed. The Commonwealth Court then ruled in favor of the Green Party for all except Angela Walker as Vice Presidential candidate. The Democrats ultimately prevailed in removing Howie Hawkins, the Green Party Presidential candidate, by appealing the case to a predominantly Democratic PA Supreme Court. The other Green Party state-wide and district candidates will remain on the ballot for November.

GPPA Steering Committee Member Jay Walker (Allegheny) said, “This is definitely a miscarriage of justice. The PA Department of State testified in court that they had told us we had filed everything we needed. They also testified that they checked with their higher ups AND with their attorneys to confirm that. No amount of legalizing will ever make up for how unjust it was to FORCE us to gather every single signature during a deadly global pandemic -- which we did -- and to then just kick us off the ballot anyway!” Walker is also a candidate for PA House District 23.

GPPA Co-Chair Sheri Miller (Adams) warned, “I know there is a lot of fear around this election, however, the idea that any political party can successfully remove a legitimate opponent from the ballot through bureaucratic manipulation should greatly concern every person who wants to live in a free society, regardless of whether they personally believe a Green Party candidate on the ballot would swing the election to the ‘greater evil.’ The greater evil is the acceptance of disenfranchising voters in a democracy. What did this exercise in voter suppression accomplish? Possibly the loss of the election for the Democrats in PA as thousands of angry people, many of whom would likely have voted for what they considered to be the lesser evil, decide to stay home on election day, disgusted with this entire mockery of our democracy. Apparently the Democrats learned nothing from their loss in 2016!”

Donations to the GPPA legal fund to help with court costs, may be made here, https://www.gpofpa.org/ballot_access_legal_fees. More information about 2020 GPPA candidates can be found at: https://www.greenslate2020.org/. The GPPA is an independent political party that stands in opposition to the two corporate parties. GPPA candidates promote public policy based on the Green Party’s Four Pillars: grassroots democracy, nonviolence, ecological wisdom, and social justice/equal opportunity. For further information about GPPA, please visit www.gpofpa.org. Please follow GPPA on social media: Facebook and Twitter.

“PA Greens will not be Silenced by Democrats,” Green Party of PA News Release, August 12, 2020;
https://www.gpofpa.org/pa_green_party_will_not_be_silenced_by_democrats;