David Schwartzman, D.C. council candidate, running ‘for the many, not the few’ 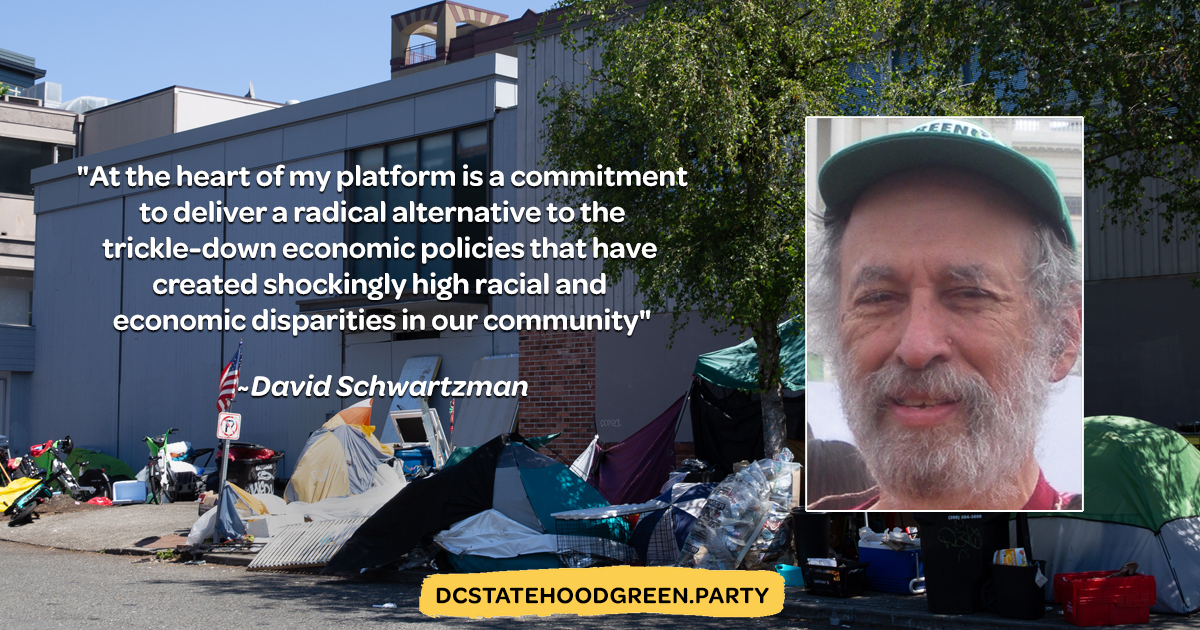 WASHINGTON — This coming Nov. 8, D.C. voters will go to the polls to elect candidates for city council, mayor, board of education, attorney general, advisory neighborhood commissioner, congressional house delegate, and shadow congressional representative. The candidate pool primarily includes Democratic candidates, but with some small challenges by independent and D.C. Statehood Green representatives, along with a very few Republican and Libertarian Party candidates.

David Schwartzman, longtime socialist and environmental justice advocate, is running for one of the city council at-large seats on the D.C. Statehood Green Party ticket. He is up against newcomers and some longtime councilmembers vying for re-election like Elissa Silverman and Anita Bonds.

On his campaign website, he claims, “at the heart of my platform is a commitment to deliver a radical alternative to the trickle-down economic policies that have created shockingly high racial and economic disparities in our community.”

The main issues Schwartzman is campaigning on are:

People’s World was able to sit down with councilmember candidate Schwartzman to ask a few questions about his campaign.

PW: Could you give our readers a sense of the uphill battle of your current campaign for at-large city council, running as an open socialist candidate on the D.C. Statehood Green Party ticket?

Schwartzman: Running now as a socialist (I identify myself as an eco-socialist) is much more acceptable to the electorate than in the past, thanks to Bernie Sanders’ campaigns as a democratic socialist, even though he actually spoke as a social democrat calling for radical reforms in capitalism.

The Democratic machine in D.C. still has significant power, but socialists like Janeese Lewis George, a member of DSA, have been recently elected in my ward (4), beating a machine Democrat. However, among the Democratic Party electorate and even progressives there is still a residue of rejection of the Green Party derived from the false belief that it was responsible for the election of Bush in 2000 and Trump in 2016, noting that the D.C. Statehood Green Party (DCSGP) is an affiliate of the national Green Party.

I am on the International and EcoAction Committees of the Green Party of the United States, and the Chair of the DCSGP Political Policy & Action Committee.

What is the main campaign issue you are fighting for in your platform? Why is it important for the Washington, D.C., community, and how can you push other candidates in the race to take it seriously?

A Green New Deal (GND) for D.C., with a priority focus on the elimination of child poverty, starting with a major increase in TANF income support, radical reduction of our shockingly high racial and economic disparities.

These projects stand out in this GND: implementation of a D.C. Public Bank and municipalization of our utilities, i.e., more eco-socialism, less capitalism.

I’d ask everyone to check out my campaign website, where I give more details.

What is your campaign’s response to the recent “uptick” of violence in the city? How would it address the mayor’s police budget and recent police killings of Black youth?

Violence in D.C. is a very important concern to all of us in our community, but it must be treated as a public health issue, not as a pretext for the harassment of our Black and brown youth, and even their murder by police which has gone much too long.

I support the agenda of Defund the MPD (Metropolitan Police Department) and refunding the community money from the bloated police budget. The elimination of child poverty is a critical goal for many reasons, including the reduction of violent behavior, because traumatized youth have no hope for the future. The NEAR Act is an important remedy for intervention in the community to prevent violence.

At candidate forums, I have called for an elected civilian police review board with subpoena power. My platform also includes the demand for terminating the collaboration of our MPD with the human rights-violating Israeli security and police forces.

What sort of environmental policies does your campaign endorse and promote for the people of Washington, D.C.?

Besides the municipalization of our public utilities already mentioned, I strongly support Free Metro [transit] for our residents, now being considered as legislation, the electrification of our bus system (powered by solar energy), recycling of food waste as a source for compost in our urban farms, a just congestion charge on vehicles entering our downtown business district, and the establishment of apprenticeship programs for 21st Century union jobs in our high schools and community.

Our local government must also take vigorous action to protect residents from toxic lead and forever chemicals (PFAS) in our food supply.

What is the difference between your platform and other Democratic and independent candidates running for at-large city council seats?

In a nutshell, my platform addresses the root causes of our racial/economic disparities, in particular the trickle-down economic agenda of our local government driven by the powerful lobby of our big corporate/developer sector, the Federal City Council.

But this agenda suffered an historic defeat last summer with the passage of a tax hike on wealthy residents with revenue targeted to increasing the D.C. EITC (Earned Income Tax Credit) to match the federal EITC, thereby helping tens of thousands of low-income families, and in addition housing the homeless and increasing the income of our early child educators.

I played a major role in achieving this victory, which opens a path to a more just D.C. with a better quality of life for all residents. I am supporting as a second vote for D.C. Council At-Large the reelection of Elissa Silverman, a champion of the needs of our working class.

What housing policies does your campaign endorse for D.C.? How do we fight for a city council and mayor’s office that is not directly controlled by big business and big real estate in D.C.?

Curb public deals/subsidies from D.C.’s revenue going to gentrification and displacement of long-term residents. Our local government should use its resources to promote social housing and community land trusts—in other words. decommodify housing, implement housing as a human right.

We can fight the big business and real estate lobby by defeating the candidates beholden to their interests, electing candidates who stand for working class power. Demand the impossible and make it a reality by organizing the working class and its allies. I stand for the many, not the few.