Samuel Rose for Schenectady School Board 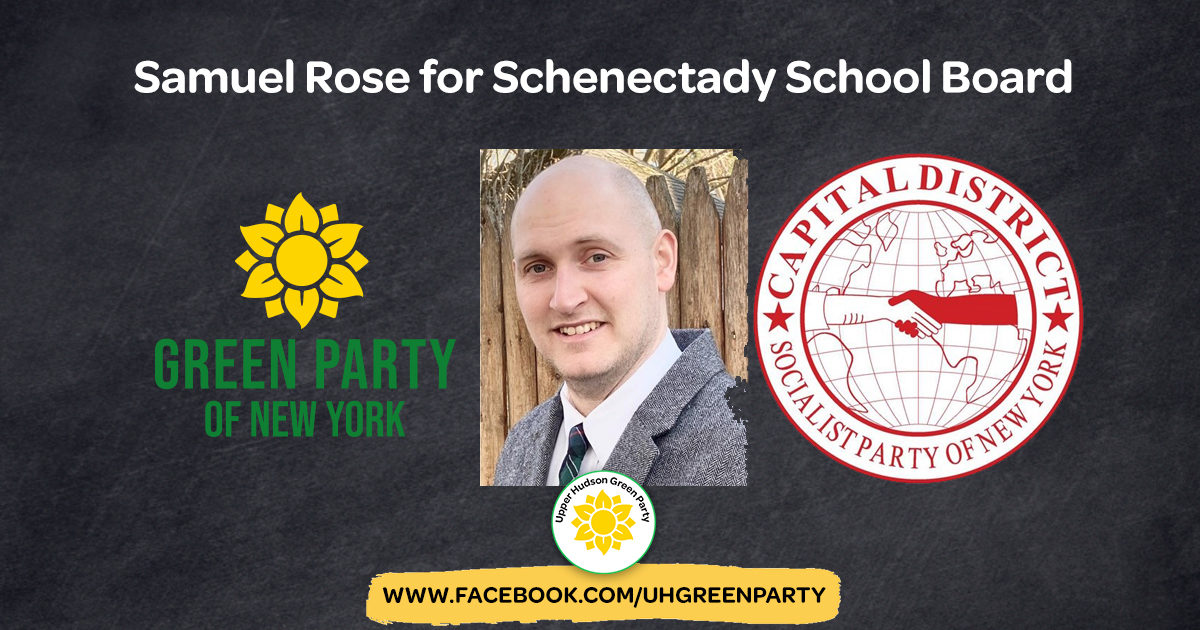 Thank you for your interest in my campaign for a position on the Board of Education for the Schenectady City School District. I announced on Facebook back in February that I am running again for a position this year on the Schenectady school board. The purpose of this post (and subsequent posts that will be linked to here) is to re-introduce myself to you the people of Schenectady, and to lay out my background, and my positions on some of the main issues around public education in the city of Schenectady. I welcome any questions you might have, and you are encouraged to contact my campaign via email at [email protected] or through the campaign page on Facebook.

I grew up in Schenectady, having lived here since I was just six months old. I played youth sports in the city for Schenectady-Belmont Pop Warner, Northside Little League, and Schenectady Babe Ruth Baseball. I am also a product of Schenectady public schools, having attended Oneida Middle School, and then graduated from Schenectady High School in 2006. While in high school, I played varsity sports in both Football and Baseball. After high school, I attended Cornell University and graduated in 2010 with a degree in Urban and Regional Studies. I went on to graduate school at the State University of New York at Buffalo where I received master’s degrees in Urban Planning and Anthropology in 2013, and finally completed a PhD in Cultural Anthropology in 2017. I currently work for the New York State Education Department in downtown Albany, and have been there since 2018. In terms of my politics, they are decidedly to the Left, and I am a member of both the Green Party of New York (local branch is Upper Hudson Green Party) and the Socialist Party of the United States of America (local branch is Capital District Socialist Party).

Schenectady is my home and I want to make public education in Schenectady work for all students and families. I believe that quality public education is essential for democracy, which itself relies upon an informed and engaged citizenry. I believe that upon graduation, students should have basic preparation for what life has ahead of them regardless of whether they attend university, attend vocational school, or go directly into a career. Out students must be equipped to perform academic work and manage daily life activities. The true metric for the success of public education is how well it is serving the poorest and lowest achieving students, not just the wealthiest and highest achieving students. The mission of public education is to truly serve all students, and thus we must have an educational system and metrics that focus on meeting the needs of everyone but especially those at the bottom. If public education is about producing critical thinking and engaged citizens and functioning adults, then addressing the needs of students is vital for not only our present, but our future as a city and as a larger community.

School board elections statewide are scheduled for Tuesday May 18, 2021. Here in Schenectady were are looking at a very different election than last year on a number of levels. For one, this will be an in-person election. Also, the disposition of the incumbents is the opposite. In 2020 we saw three incumbents that were eagerly looking to stay on the board and they formed separate electoral coalitions against each other. However, in 2021, there are only two seats up for election but neither of the two incumbents are as determined to retain their positions. Schenectady school board President John Foley announced earlier that he will not be seeking re-election, and board member Andy Chestnut was initially undecided but has since announced that he will seek re-election. The full field of candidates will not become clear until all the petitions have been filed, but these events mean that the 2021 school board elections in Schenectady will be much more wide open and that there will be at least one new person elected to the board this year. Thus far, the only two other people have publicly declared their intent to run. These include Erica Brockmyer and recently Jamaica Miles. While slightly different, they each represent a pro-Democrat and thus also pro-status quo political agenda. I will develop further analysis of and statements on their positions in the coming weeks, but again thus far these positions have been quite consistent with the status quo for the Schenectady school board.

In 2020, my campaign was the only one that truly focused on issues of economic class, democracy, community control of education, and civic engagement that form the heart of the social function and egalitarian potential of public education. I was also one of the few candidates that actually went through Schenectady public schools. That combination means that I was, and still am, the only candidate with both personal experience in this school district and a distinctly different approach to and conceptualization of educational matters. My campaign is the only option for a new voice of the people of Schenectady to represent the interests of the working class majority of the city on the school board. My campaign is currently endorsed by the Upper Hudson Green Party and the Capital District Socialist Party, and we are seeking additional endorsements from labor unions, community groups, and similar organizations.

There are five issues that I believe are most important to the people of Schenectady, and further the interests of the working class majority of this city in matters of public education. These include: