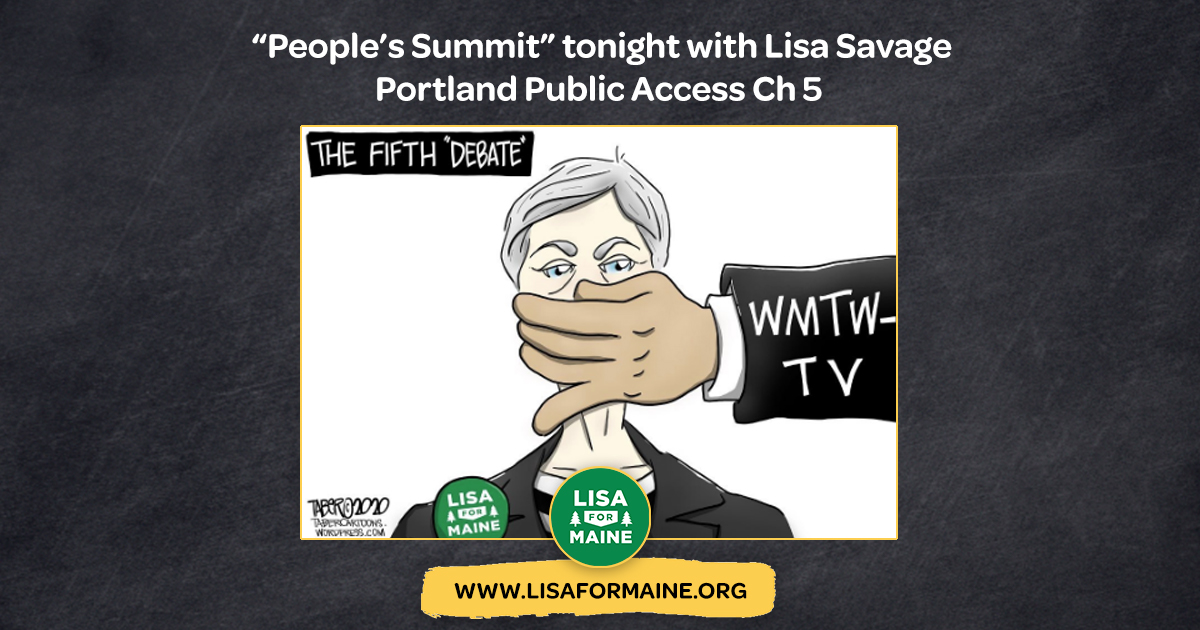 While WMTW failed to do what four other debate organizers have done this election cycle -- invite all four Senate candidates -- Lisa Savage plans to address the issues that WMTW has effectively locked out of its debate with a:

This People's Summit will feature organizers representing Black Lives Matter, as we as those working to address poverty, homelessness, and the climate crisis, speaking with Savage about the real issues Mainers face every day, and which are not being addressed by the corporate parties that control Congress. They will speak for an hour, discussing the policies that people need immediately in order for them to avoid dire consequences of hunger, homelessness, discrimination, and disenfranchisement.

Just a day after a glowing profile of her campaign, Southern Maine TV station WMTW did not invited independent Green candidate for U.S. Senate Lisa Savage to participate in its televised debate last night.

Following hundreds of phone calls to the station, hundreds of emails to station management, and the delivery yesterday of 2,500 signatures from voters demanding that Savage be included in the debate.

While Savage has not communicated with fellow candidate Max Linn, with whom she has filed a FEC complaint regarding the debate exclusion, she assumes he plans on doing the same.

"Without me in the debate," wondered Savage, "who will advocate for Medicare for All, something 56% of Mainers have said they support? Who will advocate for a Demilitarized Green New Deal, speaking for those Mainers who are clamoring for a solution to the climate crisis? Who will advocate for canceling student debt, free public education from child care through public university, or a guaranteed basic income? Who will advocate for demilitarizing and defunding the police, and redirecting those funds toward services more appropriate for the emergencies happening across Maine and the country? Certainly not Susan Collins or Sara Gideon, neither of whom have made any of these policies part of their campaigns. The Maine people deserve to hear the spectrum of voices represented on the ballot this election."

Lisa went to WMTW Ch 8 TV station on the debate night with her team and supporters and below is the link to what they did:
https://fb.watch/1pTPCz3SIc/.