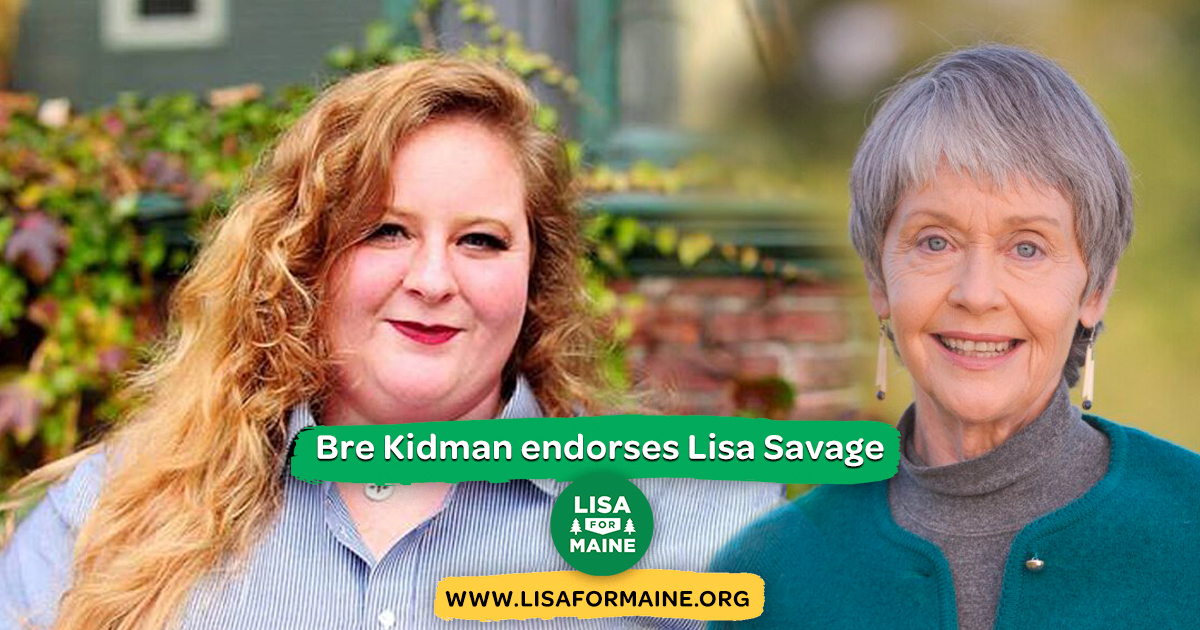 Following a loss in a three-way Democratic primary for U.S. Senate, Saco lawyer Bre Kidman is bucking political tradition by refusing to endorse the winner.

Instead of urging voters to pick Democrat Sara Gideon in a ranked-choice voting race attracting national attention, Kidman is backing one of two independents on the Nov. 3 general election ballot.

Lisa Savage, a Solon educator, earned Kidman’s support because she “shows up for forums, makes herself available and accountable to voters, and focuses her campaign on the issues that really matter,” Kidman said in a prepared release.

Kidman said on Twitter that Savage is the only candidate left in the race “who supports Medicare for All and the Green New Deal” so she ought to be “where progressives plant our first choice vote. Policy before party!”

Savage is a longtime member of the Maine Green Independent Party but opted to run as an unenrolled candidate because securing a spot on the ballot as a minor party candidate is almost ludicrously difficult.

Savage hopes to unseat four-term Republican U.S. Sen. Susan Collins in a race that also features Gideon, the state House speaker from Freeport, and Max Linn, a Bar Harbor independent who allies himself with President Donald Trump. Another independent, Portland lawyer Tiffany Bond, is trying to convince a court to put her on the ballot as well.

Kidman, the first openly non-binary candidate for U.S. Senate, racked up 7% of the vote in the July 14 Democratic primary, posting particularly strong numbers in the Portland area.

Kidman defeated Gideon in two rural towns, Van Buren and Eagle Lake, both of which were won by Betsy Sweet of Hallowell, who finished second in the primary.

Both Kidman and Sweet staked out positions to the left of Gideon, endorsing a progressive agenda that Gideon has not embraced. They also made an issue of reducing the reliance on campaign cash from the wealthy.

Kidman said voters need to “think critically about which candidates are willing to truly stand with the people against the unchecked influence of corporate power in this country.”

“With millions of dollars going into attack ads meant to obscure the fact that neither major-party candidate supports policies that Mainers favor by overwhelming margins, Lisa Savage stands out as the clear choice in this race,” Kidman said.

Savage praised Kidman’s “vibrancy and compassion” on the campaign trail in embracing the endorsement from a one-time rival for the Senate position Collins has held since 1996.

“I know that we share a belief that leadership is not reflected in the amount of money a person can raise, but rather by the amount of people whose lives a person can improve,” Savage said. “Bre’s focus on the every-person, those who are struggling to pay their rent and feed their children, is my focus, too.”

Kidman did not offer a second choice from among the candidates.

Unlike every other state’s Senate elections, Maine’s race does not necessarily diminish the chances of a favored front-runner because the votes given to anyone but the top two finishers are redistributed to whichever a voter prefers, if that voter ranked the candidates from best to worst on their ballot.

In short, Kidman’s endorsement of Savage does not necessarily make it any more likely that Gideon will lose to Collins if the two front-runners in the polls remain in the lead until Election Day.

“Mainers are tired of voting for the candidate they least dislike and being told they would otherwise be spoilers,” Savage said. “I’m here to tell them that they are free to vote their values this fall.”