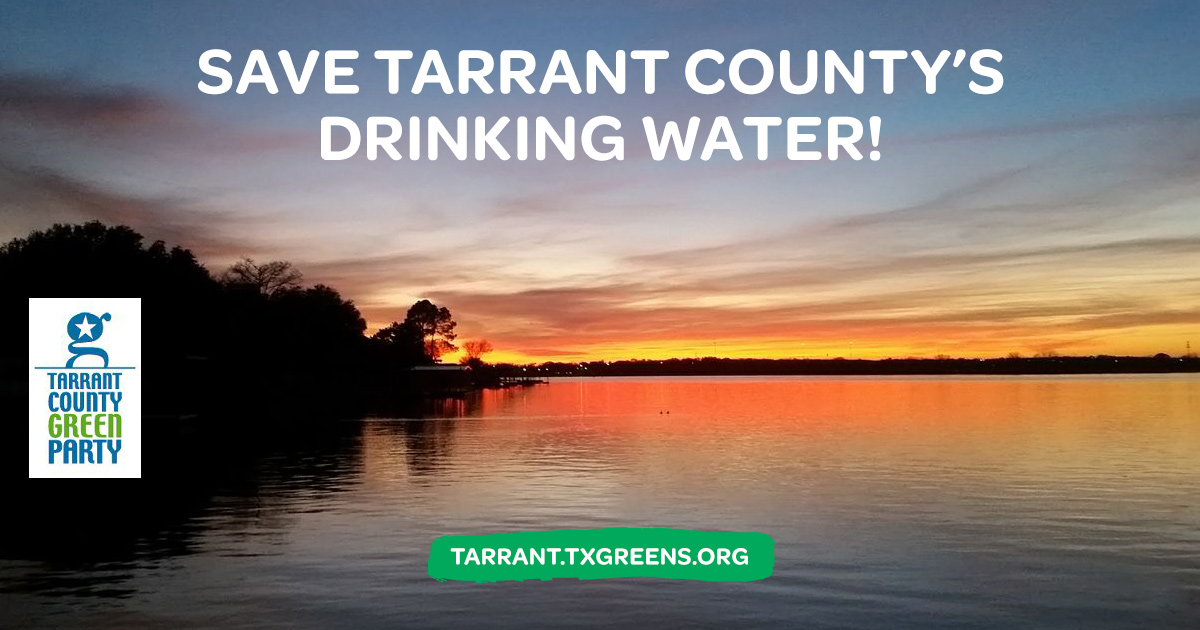 It doesn't take long in Texas to know that the oil and gas industry rules the roost, even when drilling activity threatens the drinking water of a half million people.

A local grassroots organization, Liveable Arlington, is working to do something about it! The Tarrant County Green Party is encouraging it's members to support.

In January, Bluestone Natural Resources filed a permit request to build a wastewater injection well near one of the largest water resources in the Tarrant County region, Lake Arlington. The lake provides drinking water for hundreds of thousands of residents, including Arlington, Fort Worth, and suburbs both north and south.

The wastewater consists of excess gas and salt water from fracking operations in the city. It is toxic, undrinkable, and unfit for agricultural or recreational activities. The City of Arlington is also concerned about the well undermining and doing permanent damage to the dam, about 9000 feet away from the proposed location. The U.S. Army Corps of Engineers says this is too close.

Decisions about the oil and gas industry's operations, surprisingly to many Texans, rest not with the local jurisdictions (cities, counties, ISDs), but with the powerful Texas Railroad Commission in Austin. Despite the fact that both Arlington and Fort Worth have laws against injection wells in the two cities, they do not have the final say. Why?

In 2015, the Texas Legislature passed a law known as HB 40 that seized control of such activities from the cities and gave the final decision in these matters to the state; i.e., the Texas Railroad Commission. The law was written to override a Denton (another North Texas city) decision to disallow fracking.

In January of this year, the City of Arlington filed a formal protest with the Texas Railroad Commission against Bluestone's request for a permit. The chief concern of the City is the potential for the catastrophic loss of the dam and the regional water supply to a half million residents.

The letter cites a number of concerns:

The Railroad Commission has scheduled a public hearing in Austin on May 24-25 (Note: postponed to September 5, 6 and 7). In a letter to this author, the Commission says it has made provision for a live webcast on the Commission's website.

Stepping into the fray is an active grassroots group called Liveable Arlington. The group of community activists formed organically over the past two years to advocate on behalf of residents for better air quality and other environmental protections due to the damage being caused to their quality of life by the rise in gas drilling and fracking.

Ranjana Bhandari, a spokesperson for the group, says, "This issue has garnered a lot of opposition. Hundreds of protest letters have been filed by cities, and individuals." To date, well over 1200 people have signed their protest petition.

While they had hoped the Railroad Commission would move the hearing to a local venue so that more citizens in the area could participate and express their concerns, so far, the Commission has not relented. Local congressman, Chris Turner, attempted to have the hearing moved, but his request has been tabled.

In a recent update to supporters, Liveable Arlington wrote:

What's more infuriating is that our request to move the hearings from Austin to Tarrant County has not been heard. Representative Tony Tinderholt told the media he supported the efforts to bring these hearings to Tarrant County. However, when the vote went up on this amendment to have local hearings, Rep. Tinderholt voted to table the vote.

Support for Liveable Arlington's efforts has widened far beyond Arlington residents. The petition response has been very encouraging, and the group is seeking as many volunteers as possible to help with getting the information out. They are encouraging their supporters to share the petition on their Facebook pages, and they have plans to participate in events on Earth Day to reach a lot more people.

Bhandari says, "If you're angry about this, know that I am too. Nothing makes me more frustrated than knowing that the Railroad Commission is actually making it difficult for us to express our concerns."

Members of all North Texas county Green Parties can help with the efforts of Liveable Arlington by:

Signing the petition
Writing a letter to the Railroad Commission (scroll down on the petition link shown above)
Attending local public hearings when possible (here's one coming up)
Volunteer to help with leafleting and booth representation at upcoming Earth Day events. Contact Liveable Arlington on their Facebook page
Tell friends, community leaders, and businesses that might be affected if the well is allowed.