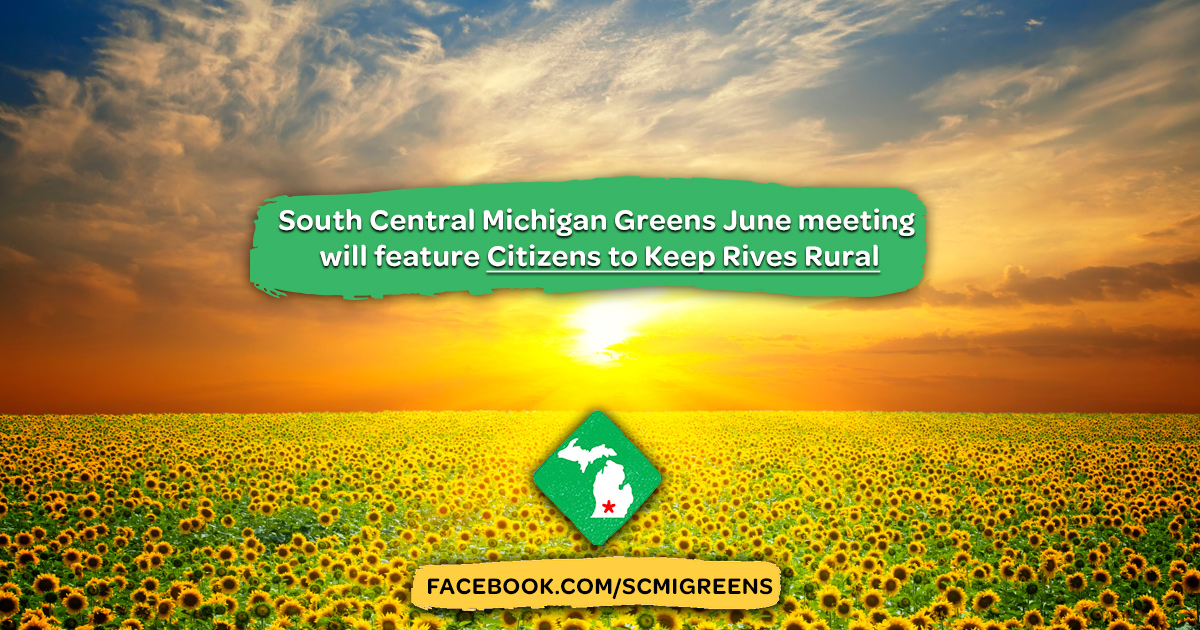 The local serves Jackson, Calhoun, and Hillsdale Counties. But anyone who supports the Green Party platform of Peace, Planet, and People Over Profit -- or wants to find out about the #realDeal, the Green Party's decade-old original version of the Green New Deal -- is welcome to attend.

Local activists with Citizens to Keep Rives Rural will head the agenda, talking about their battle against a proposed 1,800-megawatt natural-gas merchant power plant threatening to take over 200 acres of agricultural land in Rives Township. A Planning Commission meeting has been quietly scheduled for the 24th.

The plant would not be a public utility -- or potential price-reducing competition for existing utilities; its electricity would be wholesaled to the grid, possibly for export out of the state or even the country. It would become a major polluter and a major consumer of fresh water in the area, with minor impacts at most on area employment.

Another issue is the two anti-choice ballot petitions expected to be circulating soon, and what can be done about them. Plans for area actions over the summer, including this fall's Labor History Walk in Marshall (tentatively scheduled for Saturday, September 7 during the city's Historic Home Tour), will also be discussed.

Organizational business includes consideration of a general revision of local by-laws and possible election of some local officers, plus a report on the Green Party of Michigan's upcoming Statewide Membership Meeting at the Tribal Operations Building, 7070 East Broadway Road in Mount Pleasant, on Saturday, June 29.

The Website of Citizens to Keep Rives Rural has details about the pollution of the proposed plant and upcoming meetings about it.

A map of the location for the local meeting is available here.

For more details and news about the local, please visit its Facebook page.