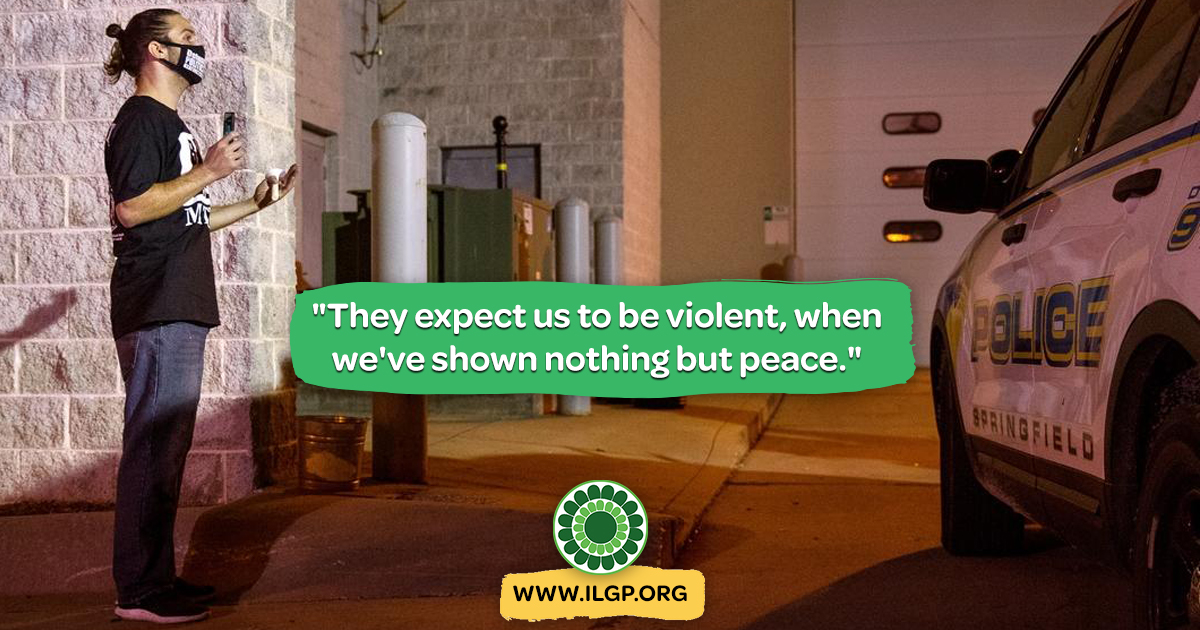 John Keating questions Springfield Police officers standing behind their vehicle about a Mine-Resistant Ambush Protected vehicle that was reported to be stationed near a local protest against the decision of a Kentucky grand jury that brought no charges against Louisville police for the killing in March of Breonna Taylor during a drug raid gone wrong. [Ted Schurter/The State Journal-Register]

As about 35 people gathered in front of the Springfield Police Department headquarters, 800 E. Monroe St., for a rally and vigil in support of Breonna Taylor Wednesday night, Trista Ishmael's thoughts drifted back to her bi-racial brother in Jacksonville.

"He is 12 and that's the age Tamir Rice was (when he was shot and killed by a white Cleveland police officer in 2014)," Ishamel said. "To think about that, it breaks my heart. I can't speak for more than five seconds without being terrified for his life."

For Ishmael and her husband, Josh Criel, both of Springfield, Wednesday marked their first protest. The "utter ridiculousness," Ishmael said of the grand jury decision — three counts of first-degree wanton endangerment for former Louisville police detective Brett Hankison and no indictments for Sgt. Jonathan Mattingly and Detective Myles Cosgrove — moved the Springfield couple to come out.

The group later marched to the Illinois Capitol Building shouting "Black lives matter!" and "Say her name!" as they went along. At times, they tried to engage and draw in Springfield police officers, who had a driveway from Ninth Street to Capitol blocked off.

There were at least three flood light stands on the lawn of the police headquarters and large flower plant stands were placed outside of the entrance, seemingly to separate the crowd.

Joshua Capers of Springfield said he felt a call to action in coming out Wednesday.

"This one hit a little harder than usual," Capers, a father of two children, admitted. "She didn't deserve to die like that. It's just a shame and I'm here to speak my voice and be heard.

One of the biggest changes can be made at the ballot box, Capers added.

"A lot of (young people here) don't realize the power that they hold," he said. "Any national movement has started grass roots."

Suzanne Tockey of Springfield joined the rally at the Capitol.

Wearing a Black Lives Matter button and carrying a sign that read "I see you! I stand with you!" Tockey noted the decision in Louisville came weeks after the 65th anniversary of the lynching of 14-year-old Emmett Till in Mississippi.

"We're still treating black lives in this country," Tockey said, "like they don't matter. We need to address the racism we have in our whole system."Tockey, who is white and works on the east side of Springfield, said she sees and feels the racism in Springfield.

Erin Byrd of Springfield, holding a "Fight for Love" sign, thought the grand jury decision was "bogus" and that all three officers should have been charged.

"People are targeted for the color of their skin," Byrd said, adding that she was hoping that all three officers would be charged.

Josh Criel's sign read "Here for the movement not for the moment."

Seirra Helmer of Black Lives Matter Jacksonville said the decision was "upsetting, but not surprising."

"It was a senseless murder by people who are supposed to protect and serve," Helmer said by telephone Wednesday.

Helmer and the group she helped found after the killing of George Floyd at the hands of Minneapolis police on May 25 have held several rallies in Jacksonville.

Education and Action Together co-founder John Keating said he was excited about seeing new faces and hearing new voices speak up at the rally.

"When you see a decision this blatantly wrong, more people will take notice and say this is something I can stand for," said Keating, a Green Party candidate for the 96th District seat.

Keating said he thought the extra police presence was "excessive."

"We've shown them time and time again there's no reason for that," he added. "They expect us to be violent, when we've shown nothing but peace."