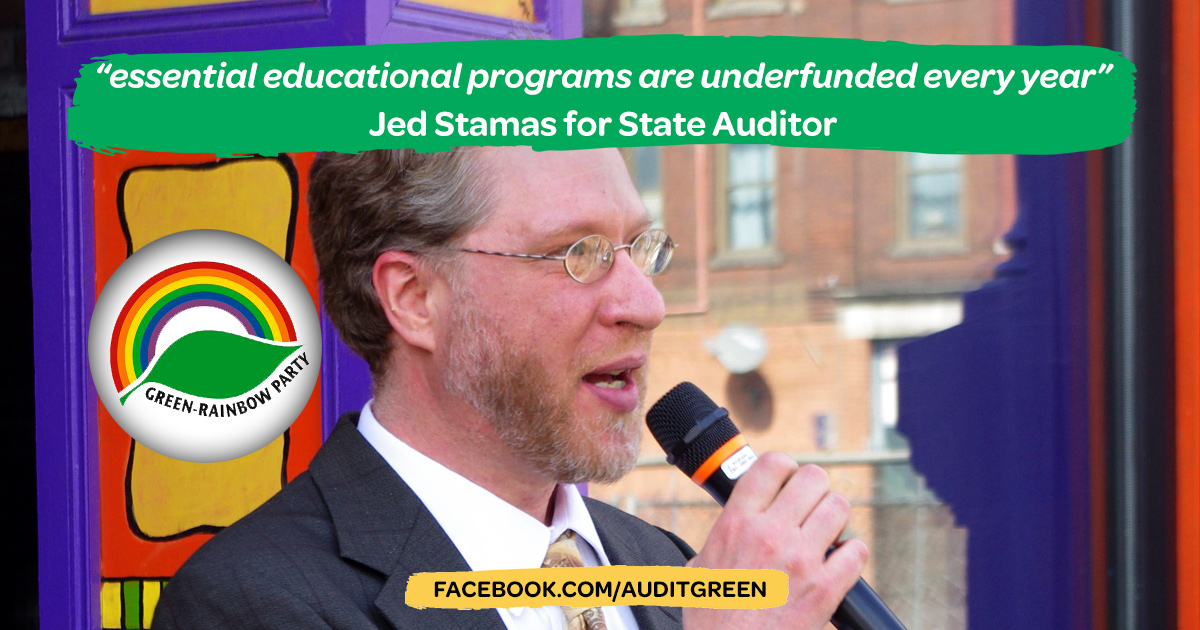 As the Green-Rainbow Party for State Auditor, Edward 'Jed' Stamas, is committed to certifying that the Commonwealth is meeting its critical education goals. "We must ensure that all students across the state have equal access to the resources they need to meet their intellectual, economic and social needs. The Office of the Auditor is responsible for ensuring that our tax dollars for education are spent effectively and appropriately," said Mr. Stamas.

"As auditor, I can make recommendations to improve the efficiency of state spending in areas like education, housing, and health care. I want to see a state government invests its resources in the people's human needs," said candidate Stamas. "The incumbent Bump administration only performs selective audits, investigating a few things here and there. In contrast, I will follow the auditor's responsibilities under the law and look at each state entity, as well as the system as a whole. Our government is not working for us.

A long-time teacher in some of Massachusetts's most disadvantaged schools, Mr. Stamas is deeply concerned about the state's education system. He said, "Adults are not taking responsibility for the educational needs of future generations. In 2000, I chose to pursue a career in science and mathematics education. I spent many years providing people with opportunity and a love of learning as a teacher. But there was only so much I could do to help all my students succeed, when essential programs were underfunded year after year. Too many important aspects of our education system are decided by politicians on Beacon Hill, who know little about it.

"The auditor should be investigating our education mandates. In Massachusetts, over a billion dollars is spent on education but Beacon Hill passes much of the funding responsibility on to cities and towns, which are saddled with state-imposed taxation restrictions such as Proposition 2 1/2.

"And According to the state's own Foundation Budget Review Commission, state lawmakers have been shortchanging the education of students across Massachusetts somewhere between $1 billion and $2 billion a year, causing many school districts to cut teachers, supplies, and technology. This problem was identified three years ago and Beacon Hill still has not solved it. Meanwhile, special interest tax breaks to well-connected industries cost the Commonwealth over $1 billion annually, having tripled in value since 1996."

Stamas called upon legislators to review the overall effectiveness of its policies on higher education. "We know that access to college and job training reduces income inequality." continued Stamas. "Yet, cuts in state support for public higher education have contributed to some of the highest tuition and fee increases in the nation, doubling from 2001 to 2016. Sadly, Massachusetts spends less on public higher education as a share of its overall wealth than almost every other state."

Stamas has been endorsed by Jill Stein, the Green Party presidential candidate in 2016. As she points out, "We've waited too long for change in Massachusetts, where the wealth of the top 1% is growing faster than in any other state. But for everyday people, wages have stagnated, higher education and housing costs have skyrocketed, and community programs have been severely cut. At the same time, tax giveaways to the rich have drained billions from state coffers. Green-Rainbow candidates will fight this growing injustice with concrete reforms to create real democracy, expose fraud and waste, and meet urgent human needs."