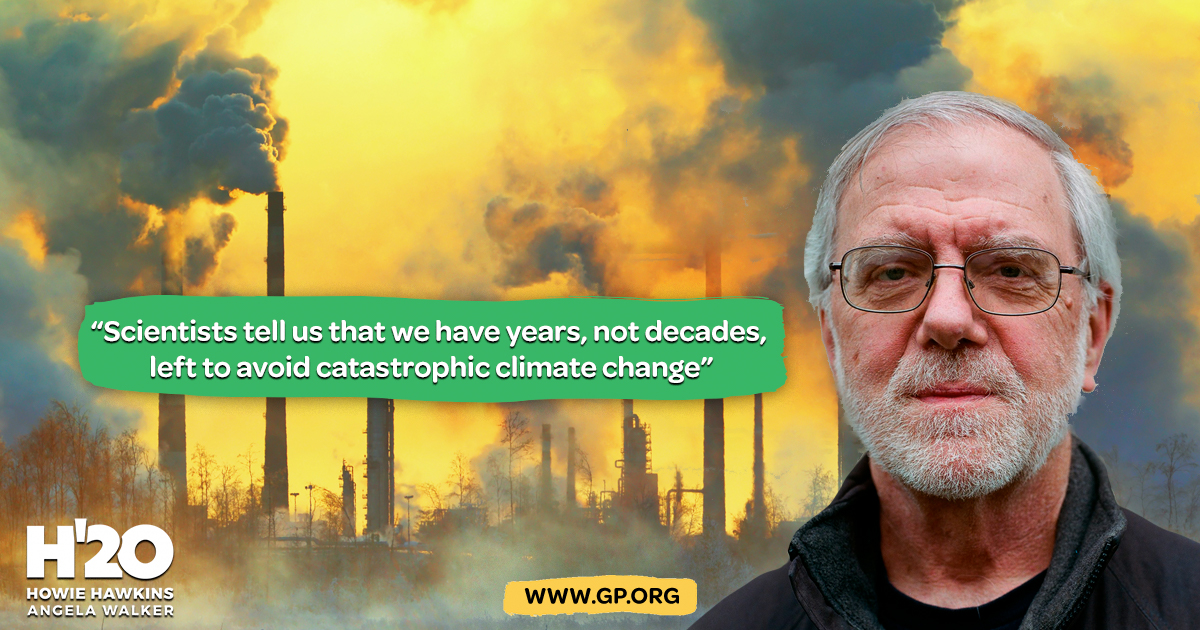 SYRACUSE, NY – Howie Hawkins, the Green Party candidate for President, said today that America needed a true Green New Deal, not the watered-down version that the Democrats have used for branding and from which they are increasingly running away from.

Hawkins, who initiated the call in the U.S. for a Green New Deal in his 2010 campaign for Governor of New York, co-authored an op ed that outlines the history of the proposal. Whatever Happened to the Green New Deal?

Hawkins advocates a ten-year timeline (now 2030) to get to zero greenhouse emissions.

“Scientists tell us that we have years, not decades, left to avoid catastrophic climate change. Already tens of millions are being negatively impacted by extreme weather and air pollution. The number of climate refugees are rapidly expanding, including at our own borders. We need a full-scale emergency mobilization to confront this crisis, similar to what we did in World War II, not some tinkering with the all-of-above energy policy promoted by the Obama-Biden administration,” noted Hawkins.

Hawkins noted that many of the key provisions of his ecosocialist GND were missing from even Congresswoman Ocasio-Cortez’ initial proposal, such as the need for public ownership and democratic control of the energy system and cutting the military budget by 75% or more to help pay for the program. Many proposals labeled by Democrats as GND promote a 2050 timeline to get to “net zero” emissions while failing to include the Economic Bill of Rights included in Hawkins’ proposal, building upon FDR’s proposals in 1944: a guaranteed living-wage job, a guaranteed income above poverty, affordable housing, Medicare for All, lifelong tuition-free public education, and a secure retirement by doubling Social Security benefits.

“The ecosocialist approach recognizes that capitalism’s destruction of the climate and exploitation of people are part of the same process. It recognizes that in order to harmonize society with nature we must harmonize human with human by ending economic exploitation and all forms of oppression. It calls for an ecosocialist economic democracy that meets the basic needs of all within ecological limits,” added Hawkins.