Green Party of California Stands with Workers on Labor Day 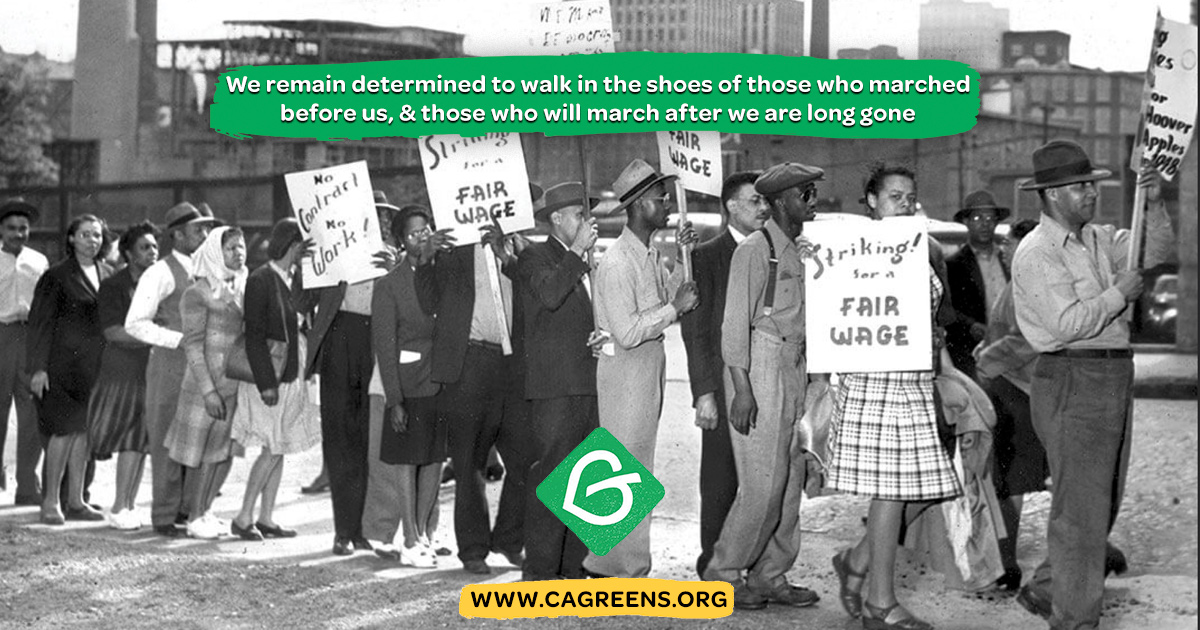 Labor Day is not a holiday, but a battle in history that continues to be waged today.

Far removed from barbecues and the start of the football season, the first Labor Day was celebrated on September 5th, 1882, in New York City. An estimated ten to twenty thousand workers marched from City Hall, past Union Square to 42nd Street. It was an unpaid day-off where speeches were given that voiced discontent with the bosses of labor. Socialists, the Knights of Labor, and various left organizations associated with the Central Labor Union organized the march calling for shorter hours, higher pay, safer working conditions, and a labor holiday.

This was not a day of recreation for the workers and their families that the holiday has evolved into today, the origins are deeply steeped in the revolutionary spirit of the worker and a united working class.

The struggle for workers' rights continue to this day. Earlier this year, California teachers went on strike in Los Angeles and Oakland to demand higher wages and comprehensive benefits. They extended their bargaining power to also fight for their students demanding smaller class sizes, more counselors and psychologists, limitations on school closures and stronger regulations on charter school. In August, Kaiser Permanente workers voted to authorize an unfair labor practices strike, the nation's largest in more than 20 years, to seek higher wages able to support middle-class families, assurance of adequate staffing, compassionate use of technology and a worker/management partnership that would bargain in good faith. Recently New York farmers have challenged a state law for the right to organize and demand better wages and work conditions.

Unfortunately, legislative assaults on union power and collective bargaining rights have continued to intensify in the United States and abroad.

In the county that gave birth to two international labor holidays - Labor Day in 1882 and May Day in 1886 - it is sadly ironic that basic human rights such as a living wage, universal healthcare, affordable housing, and a tuition-free higher education are NOT guaranteed. Moreover, the United States has the highest level of inequality in the world today, with the richest 1% owning over 42% of the national wealth, the most of any other industrial country.

It is also incredibly hypocritical for the seven largest advanced economies in the world to meet last weekend in Biarritz, France, under a common theme of "reducing inequalities", while many grassroots and labor organizations were barred from participating in this obsolete summit. French President, Emmanuel Macron, has largely ignored the demands of France's struggling working class, and continues to privatize government-provided social services.

As the global wealth continues to be concentrated into fewer hands and the climate crisis goes unchallenged, nearly 1.3 billion people live in poverty worldwide, and it is the poor and indigenous people of many continents who bear the brunt of economical and environmental devastation. We recognize that what has brought us here is not the needs of the many, but the greed of a few.

On this day and always, the Green Party of California stands with workers who create all the wealth, yet continue to struggle under the ever-growing greed of capitalism. As we enjoy a leisurely holiday, we remain determined to walk in the shoes of those who marched before us, and those who will march, after we are long gone.

Another world is possible, a just, equitable, and sustainable world we deserve.

Learn more about the history of Labor Day

Read about the Green Party of California's platform on unions