The Green Party of the United States calls for accountability and transparency for the 335 police killings in 2021 and all 8,000 police killings reported through the Deaths in Custody Reporting Act and the Fatal Encounters database. The Green Party platform values human life and calls for immediate action from Chiefs of Police and state Attorneys General to hold killer cops accountable and end this violence.

The guilty verdict in the Derek Chauvin trial on April 20th was the first step in holding law enforcement accountable but the killings must stop. The same day In Ohio, Ma'Khia Bryant was killed by police moments before the verdict was read. Witnesses in patrol cars heard the reading of the verdict as it was transmitted live via the police radio. The following day on April 21st, law enforcement continued as usual when three more people were executed: Andrew Brown in North Carolina, Phet Gouvongvong in Massachusetts, and a third who is referred to only as "male in California" in the official report. According to the Mapping Police Violence database from 2013 - 2021, Ohio police have killed 247 people, North Carolina police have also killed 247 people, Massachusetts police have killed 63 people, and California police have killed 1,395 people.

“When I reflect on the Chauvin convictions, and the continued police killings in my own backyard of Columbus, Ohio, my heart breaks for the thousands upon thousands throughout the centuries for whom there was no video, no accountability, and no recourse otherwise. They were simply murdered, lynched, and brutalized as a matter of public policy and tradition.” — Philena Farley, Co-Chair of the Green Party’s Media Committee.

In Ma'Khia Bryant's community of Columbus, Ohio, twenty-six people have been murdered by police with four incidents in 2021. Ma'Khia was 16 years old. Our society has no excuse for making police violence the first and primary response to crisis situations. Police killings do not correlate with violent crime but instead with traffic stops, mental health checks, and domestic disturbances.

It is imperative to transform our public safety model and implement community control of police. We must make social services the top priority and ensure public safety personnel reside in the communities they are protecting and are selected by those communities.

Rates of Police killings by state from January 2013 to December 2020: 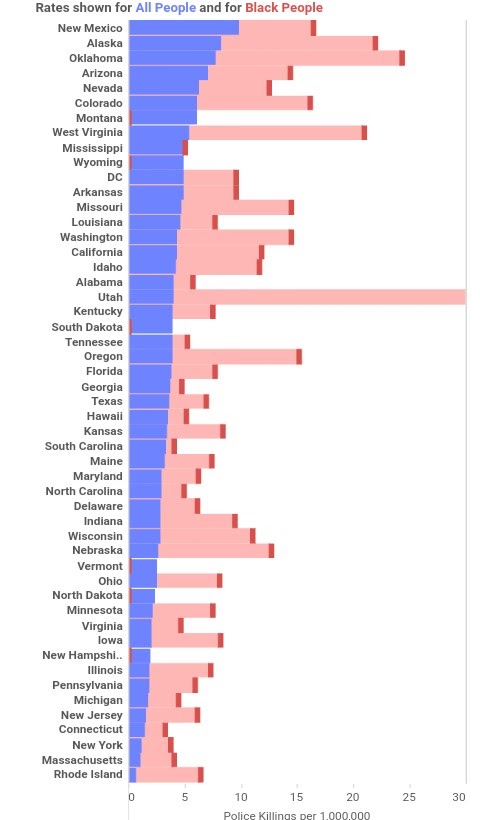