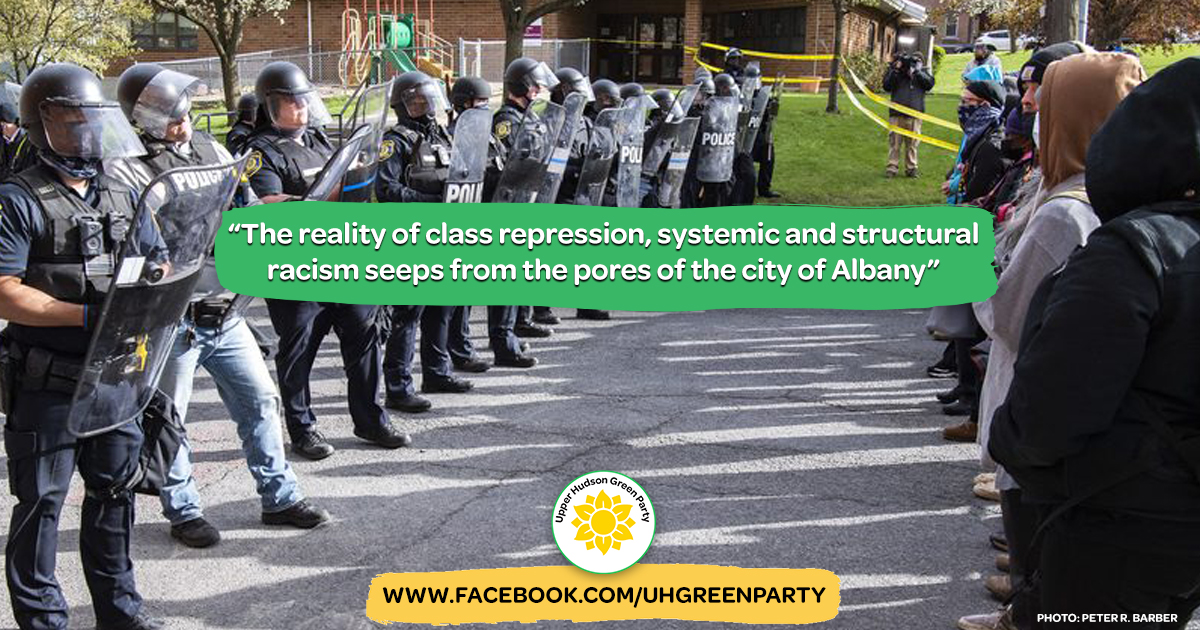 We stand in solidarity with the grassroots Black Lives Matter movement to confront and end police violence, repression, and murder against the working class and communities of color.

Capitalism and racism are intertwined. Police brutality against non-violent, working class protesters is a twin of the brutal austerity routinely forced working class residents. Is there any wonder that a city like Albany that would massively cut school budgets, fire teachers and staff would also encourage police violence against city residents? Or that in a hundred years of Democratic rule, the city economic and political elite has overseen rampant poverty and segregation? The police are used to prevent mobilization to make any change to this condition.

The refusal by Mayor Sheehan and the City of Albany to seriously address the demands made by protesters against ongoing police violence means that they are unwilling to address the systemic racism and class repression of which police violence, and the Albany Police Department (APD), are a part.

It means Mayor Sheehan and the City of Albany are a part of that systemic racism, class repression, and violence.

Mayor Sheehan and Chief Hawkins refused to act in good faith and meet with protesters during the week between the initial police assault (April 14th) on protesters and the decision to attack a peaceful encampment outside the station (April 22nd). As Alice Green of the Center for Law and Justice has said, there is clearly a vacuum of leadership in Albany at the highest levels.

Mayor Sheehan and Chief Hawkins have told a catalogue of lies as to why the encampment needed to be cleared:

No one can seriously believe the police were afraid of protesters when the APD in recent years has murdered civilians, assaulted protesters, and used chemical weapons against civilians.

Nor do we believe the blockage of Arch Street required opening; for the last week it has remained barricaded and closed.

Comparison of anti-racist activists in Albany to the open fascists that occupied the Capitol Building on January 6th is a patently offensive statement. We would say Mayor Sheehan should be deeply ashamed, but it is clear by her acts and deeds that she has no shame.

It is time for Mayor Sheehan and Chief Hawkins to resign. Their willingness to use violence, including chemical weapons, against civilians, refusal to fire cops that have assaulted civilians, adamant insistence on refusing to meet openly with protesters and community groups, and crafting of a budget in the year after a massive uprising against police brutality that does nothing to both defund the police and transfer non-law-enforcement functions of the police to civilian groups shows they are committed to maintenance of the status quo.

The Common Council should begin the process of defunding the APD and shifting the bulk of its resources to a newly-created Division of Citizen Safety and Oversight within a Department of Public Safety. This should be accomplished in the 2022 City Budget.

The reality of class repression, systemic and structural racism seeps from the pores of the city of Albany. A Democratic Party machine has ruled the capital of New York for a century and been complicit in building a segregated municipality where working class citizens are routinely terrorized by police violence and repression, underfunding of education and social programs. We believe that this classism and racism is tied to the oppression we all face under capitalism.

We have no illusions that the above changes and reforms will end capitalism, racism, or police violence in Albany. Yet we also believe Mayor Sheehan and Chief Hawkins have failed the citizens of Albany and must step down, and that the reforms offered above would be meaningful changes for people of color - and indeed all working class residents - in Albany.