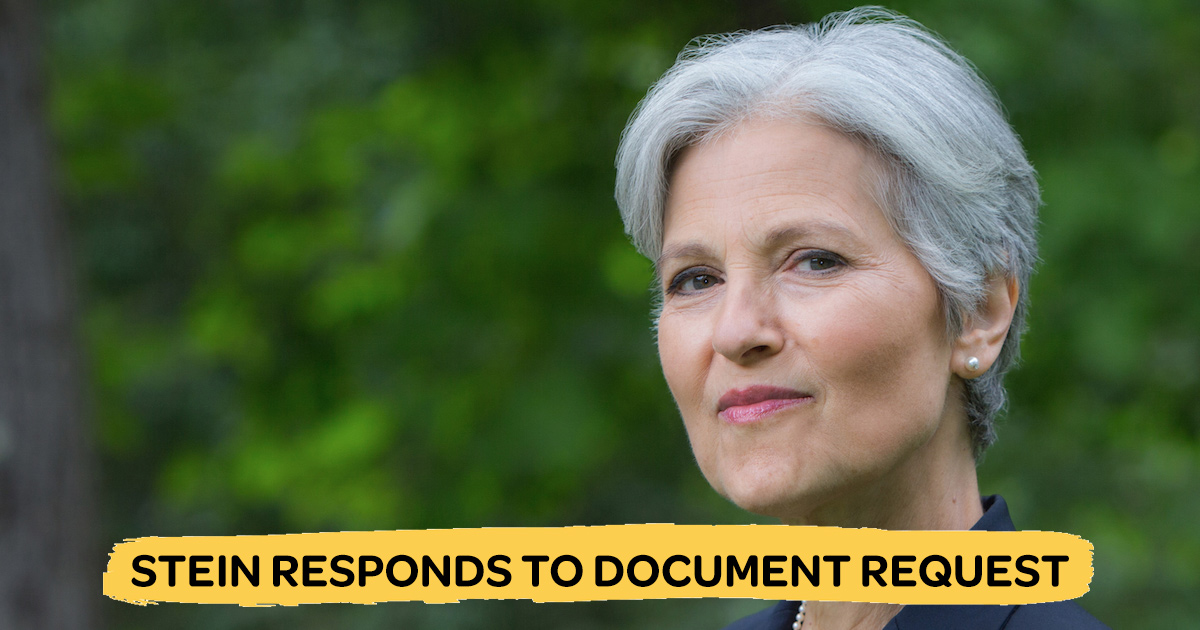 “We are facing a precarious historic moment. Democracy is threatened by interference in our elections, and by interference in our civil liberties. Likewise we are endangered by warmongering, rampant militarism, nuclear confrontation and accelerating climate change. To solve any of these interlinked problems, we need a functioning democracy and a voting system we can have confidence in.

As first steps to restore trust in that system, we are calling for a nonpartisan Emergency Commission for Election Protection & Voting Justice, as well as international negotiations for an election non-interference treaty. These should be stepping stones toward broader international dialogue to address other urgent looming threats that endanger not only our democracy, but our very survival.

Handing Over Materials to Senate Committee

Today, cooperating with the Senate Intelligence Committee’s investigation of Russian interference in the 2016 election, our campaign has completed the handover of materials in response to the Committee’s request. The information provided includes documents regarding my 2015 visit to Russia to speak at RT‘s 10th anniversary conference on media and international relations, an extension of my trip to the UN climate conference in Paris, where I also spoke with international leaders and activists. The materials include records of the campaign’s payment for my trip to Russia as well as longstanding Green Party policy objectives of promoting dialogue and diplomacy as essential alternatives to war, nuclear confrontation and climate catastrophe.

Interference in Our - or Any Country’s - Elections Is a Blow Against Democracy.

We take very seriously the issue of interference in our elections, as demonstrated by our continuing efforts to conduct the first and, according to public information, the only 2016 post-election examination of vulnerable US voting machines, a critical cross check on election security that should be routine.

Interference in our - or any country’s - elections is a strike against democracy - whether the intruder is a foreign government, criminal network or domestic actor.

While Pursuing Concerns About Foreign Interference, We Should Not Ignore Domestic Interference in Plain Sight

Concerns about foreign interference should not distract us from interference in plain sight originating from within our own borders. That includes the actions of the Democratic National Committee, which biased its party’s own primaries, effectively disenfranchising millions of Bernie Sanders’ voters; corporate media that gave Donald Trump billions in extra free airtime because he was “damn good” for network profits, in the words of CBS’ CEO; or voter suppression schemes like voter ID laws, Interstate Crosscheck and felon disenfranchisement that systematically deny millions of Americans their constitutional right to vote.

The cutting-edge tactics of the Cambridge Analytica scandal make alleged Russian social media meddling look primitive and insignificant by comparison. Cambridge Analytica is accused of using without permission the private information of up to 87 million people, assembling thousands of data points on individuals to craft micro-targeted messages in a campaign of mass manipulation with the scale and sophistication of military-style psy-ops. The actions of the Russian Internet Research Agency, on the other hand, appear to be the opposite of sophisticated and strategic. The lack of targeting, timing and relevance of the vast majority of their Facebook ads underscores the doubts expressed by investigative reporters who’ve suggested the Internet Research Agency may in fact be a “click-bait” factory intended to generate advertising revenue, and not an election meddling operation. The insignificant numbers of the Internet Research Agency’s social media posts - compared to the vastness of the social media universe -  further diminishes the claim that it had significant impact on the election outcome. Facebook posts from the Internet Research Agency amounted to a mere 0.0004% of total Facebook content; Russian-associated tweets accounted for 0.02% of election related tweets, and Russian-linked Youtube videos had hit totals only in the hundreds, hardly the stuff of viral transmission.

We Call for Emergency Commission to Advance Many Urgently-Needed Solutions

Cambridge Analytica is not alone in using this new, malignant form of election interference that combines big data, micro-targeting, and psyops. It adds yet another danger to the existing threats to secure and just elections. To restore confidence in our elections, each type of interference can and must be remedied, but time is short before the 2018 elections. Therefore, we are calling for a nonpartisan, Emergency Commission on Election Protection & Voting Justice to oversee urgently-needed immediate as well as longer-term solutions to ensure a secure and just vote.

We must end voter suppression schemes and ensure the constitutional right to vote. Prior to the 2018 election, we need a rapid transition to paper ballots, especially in the 12 states that still use the most vulnerable electronic machines lacking any paper record whatsoever; cybersecurity best practices, universal rigorous post-election audits, and routine post-election recounts as warranted. Congress has provided substantial funding for cybersecurity in the March, 2018 Congressional budget. The funding should prioritize paper ballots, and be expedited to ensure reforms are in place by the 2018 midterms.

To begin addressing the abuses of big data, micro-targeting and military-style psyops, privacy protections must be created for personal data and internet/social media communications. In the rush to guard against propaganda and “fake news”, however, we must ensure that the rights of free speech and political opposition - increasingly stifled in current social media and conventional press - are restored and protected.

We must also take on the fundamental corruption of our elections that has been so normalized that it’s rarely even discussed: the stranglehold of big money over the entire process. We can break this stranglehold by establishing public financing for political campaigns and free air time for ballot-qualified candidates, which would greatly diminish the cost of political campaigns. We can expand voter choice and end fear-based elections through Ranked Choice Voting, which liberates voters to vote for what they want, instead of against what they dislike. And we can ensure voters are informed about the greater range of choices that they are clamoring for - by creating a new presidential debate commission not controlled by the two establishment parties. For further details see www.votingjustice.us .

We Must Also End US Interference in Other Countries’ Elections

To effectively deal with foreign election interference, we must address the fact that the US is not only a victim of election interference, but a leading perpetrator of it as well, whether through nonviolent or violent means. Given our track record, it is simply unrealistic and unethical to expect other countries to respect the sovereignty of foreign elections unless we commit to doing so as well. Effectively ending election interference requires international diplomacy and treaties. The Emergency Commission would provide consistent long-term public education, advocacy and watch-dogging that will be required to overcome resistance to the reforms required to achieve truly fair elections.

We support the investigation of potential concrete crimes related to corruption, quid pro quo deals, money laundering, financial conflicts of interest, and obstruction of justice. Such investigations should not be tainted by misuse of “Russiagate” in broader political discourse for the purpose of promoting censorship, warmongering and politically-motivated efforts to intimidate and silence political opposition to the bipartisan political establishment.

The letter we are releasing today from our lead attorney, Mara Verheyden-Hilliard, to the Senate Intelligence Committee details how their bipartisan investigation into our campaign - the flagship of an independent opposition political party - intrudes into First Amendment rights protecting freedom of speech and political liberty for all Americans. While we provided documents responsive to the Committee's requests, we declined to provide Constitutionally protected materials, including the internal policy deliberations of our campaign, the flagship for an opposition political party. This request intrudes into the First Amendment rights of political and associational freedom that are critical to political liberty for all Americans.

Such Constitutional threats add to the dangerous current climate in which progressive political opposition, social movements, and the anti-war community are being targeted with censorship, surveillance and political intimidation. This includes recent censoring of social media and the internet, blacklisting progressive and anti-war media and organizations, restricting the right to protest, expanding surveillance, and disparaging social movements like Black Lives Matter, Standing Rock water protectors, anti-pipeline activists, and the gun control movement as “tools” of “Russian interference”.

“Russiagate” is also being used to argue for aggressive foreign policies, disparage peace advocates and justify massive military expenditures. This is all the more alarming in the setting of the resurgent cold war, accelerating nuclear arms race, and 17 years of unbridled US militarism that has proven disastrous abroad and devastating to human needs at home.

A military-industrial-surveillance complex is now deeply entrenched within the bipartisan political establishment and much of the corporate media. This dangerous juggernaut must not be allowed to twist legitimate concerns about election interference into support for political repression, censorship and warmongering. Instead, we can begin restoring confidence in our democracy right now with a nonpartisan Emergency Commission for Election Protection & Voting Justice and international negotiations for an election non-interference treaty. These should be stepping stones toward broader international dialogue for nuclear disarmament as called for in the recent UN treaty to ban nuclear weapons, for major reductions in military budgets, and for steeply accelerated climate action. These actions would go a long way to actually begin reducing dire threats that endanger not only our democracy, but civilization as we know it. Time is short. We must not be diverted from this task.”