Green Party candidate Jill Stein escorted off debate premises, may try again to get in 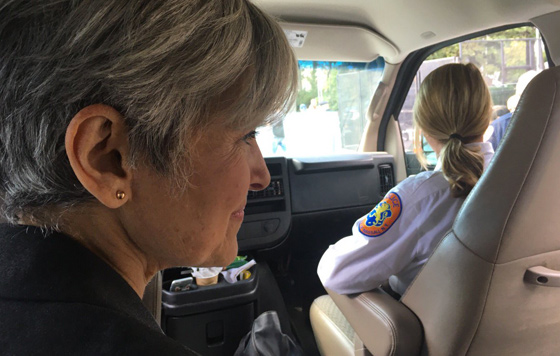 HEMPSTEAD, N.Y. — Four years ago Stein was arrested for disorderly conduct and handcuffed to a chair at the Hofstra University debate. She tried her luck again this year and has already been escorted off campus.

In August, Stein told USA TODAY that she would be back at this year's first debate and she was "absolutely" ready to be arrested again. Stein and Libertarian candidate Gary Johnson didn't make the polling threshold (15%) in polls to make it on stage.

This USA TODAY reporter spotted Stein and her team on the bus that took press Monday morning and tweeted about the appearance.

The tweet scrambled law enforcement officials and they attempted to track down Stein, who is not credentialed for the event.

According to Stein's campaign she was on her way to do a series of interviews with broadcast outlets when they finally caught up with her.

"We were there under legitimate pretenses," Meleiza Figueroa, Stein's press director, told USA TODAY. But as the group walked from one broadcast outlet's setup to the next they were approached by Hofstra security and Nassau county police. The officials told the Stein contingent that after the interview they "would be escorted off campus immediately, so that's exactly what we did — we complied," Figueroa said.

Stein is now waiting at a location near Hofstra University as "hundreds of supporters" are bused in. They will all gather outside the gates of the university for a demonstration at 5:30 this evening. "Our supporters are going to attempt to escort Jill in. We are expecting they will be unsuccessful," Figueroa said. If she's not allowed in "Jill will be holding a people's debate outside the crowd."