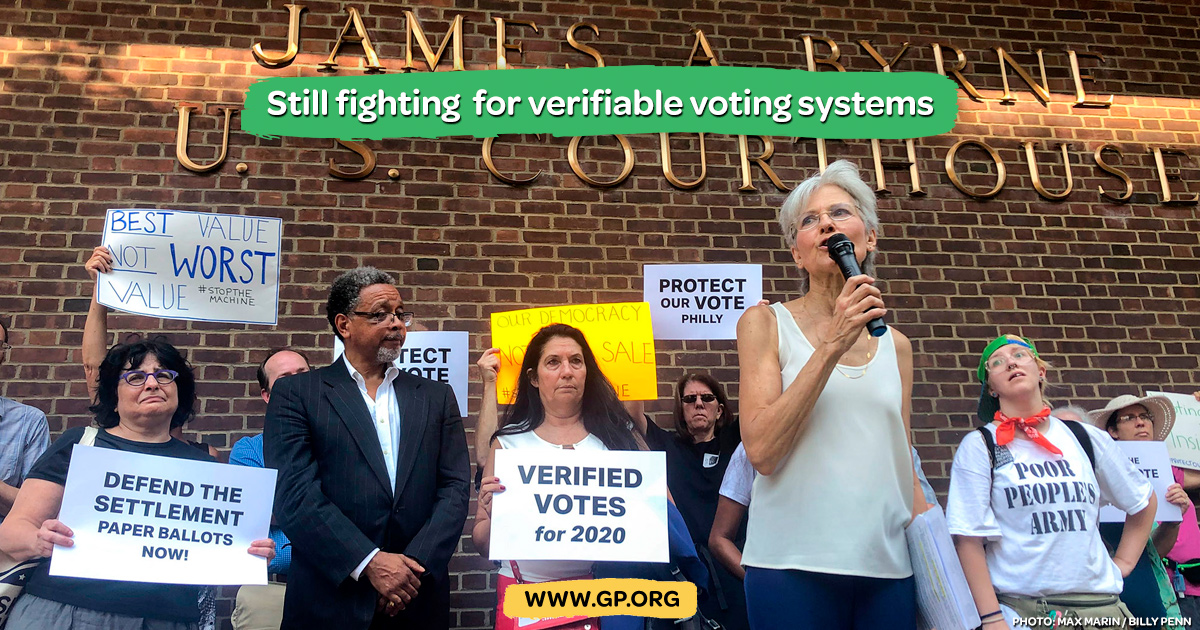 PHILADELPHIA – Former Green Party presidential candidate Jill Stein is jumping back into Pennsylvania’s election issues. Last time around, it was to launch a crowdfunded multi-million-dollar lawsuit to demand a recount in the commonwealth as well as two other states after the 2016 election.

This time, she’s going to battle with a controversial fleet of new voting machines acquired by Philadelphia and other counties across the state.

Counties statewide are under mandate from Gov. Tom Wolf to upgrade their antiquated election machinery before the 2020 election. But activists have been pushing back against Philly’s new touchscreen models, called ExpressvoteXL, for nearly a year. They say the $29 million contract was awarded under dubious circumstances — and that the machines themselves are “hackable.”

Stein, who has refashioned herself into an election security champion, argues the use of ExpressvoteXL machines violates Pennsylvania’s legal settlement of her 2016 vote-counting lawsuit.

Flanked by activists chanting “Protect our votes!” outside Philly’s federal courthouse on Wednesday, Stein fired off a litany of complaints about the new voting machines.

The new equipment uses barcodes to tally individual ballots after they’re cast. Similar technology has been banned in Colorado over security concerns, Stein noted, and there are still technical disputes over whether or not the ExpressvoteXL machines technically issue a voter-verifiable paper ballot.

“We will seek relief in the court if this unverified, unauditable, hackable, expensive machine is not promptly decertified,” Stein said.

The Department of State did not respond to a request for comment Wednesday. State election officials have previously found the activists’ concerns unfounded.

Jill Stein is outside the federal courthouse in Philadelphia with election security advocates calling to void the city’s $29 million contract for new voting machines.

The battle of the verifiable paper ballot

Aside from the complaints about the machine’s technology, Stein slammed the secretive nature in which the new devices were selected.

A recent audit from City Controller Rebecca Rhynhart said the acquisition process for the machines was “opaque, predisposed toward one vendor, and raised conflict-of-interest concerns.”

The dispute over the equipment’s software security remains central to activists’ contention.

Max Weisman, a spokesperson for Nebraska-based manufacturer Election Systems & Software (ES&S), noted that the state had already denied a previous petition to block the ExpressvoteXL from use.

“ExpressVoteXL is a safe, secure and fully auditable voting machine,” Weisman said in a statement on behalf of the company. “Thousands of Philadelphians have already had the opportunity to test the machines themselves and there has been overwhelming positive feedback.”

The #Recount settlement has been a critical step forward in PA & helped raise the bar for the nation. We can't allow this progress to be rolled back by unaccountable, undemocratic, backroom decisions wasting public dollars on costly, insecure & needlessly complex voting machines.

Kevin Skoglund, chief technologist with Citizens for Better Elections, has been spearheading the effort to promote hand-marked paper ballots over electronic machines. He says the machines do not produce a true “physical record.” The ExpressvoteXL prints out a summary of your ballot, which you can review. But ultimately, the barcode is what matters when votes are counted, he said.

“These ballots on this machine are either voter-verifiable or paper ballots. They count the machine representation of the vote — they count the barcodes,” Skoglund said. “You can’t read barcodes, and neither can I.”

In the tumultuous days after the 2016 election, Stein raised $7.3 million to support her recount votes in Pennsylvania and two other swing states.

While none of those recounts ever actually happened, Stein has kept spending the money from her campaign fund. Scrutiny mounted as the years went on and Stein kept doling out of thousands of dollars to attorneys and campaign staffers.

Stein countered that her scuttled political campaign has rebranded as a recount campaign, spending donor dollars to advance efforts to better election tactics. Asked Wednesday if she was gearing up for a 2020 run, Stein said she was focused on the votes…for now.

The state has 30 days to respond to Stein’s letter requesting decertification in accordance with her settlement. The 3,700 new voting machines will nonetheless make their debut in Philadelphia next month for the Nov. 5 general election.

Rich Garella, co-founder of the group Protect Our Vote Philly, said the campaign plans to keep fighting to get the machines disqualified by 2020.

“In 2020,” Garella said, “Philadelphia is going to be the bull’s eye in the target for election interference in the presidential elections.”