Stop the US war on Iran! US out of the Middle East now! 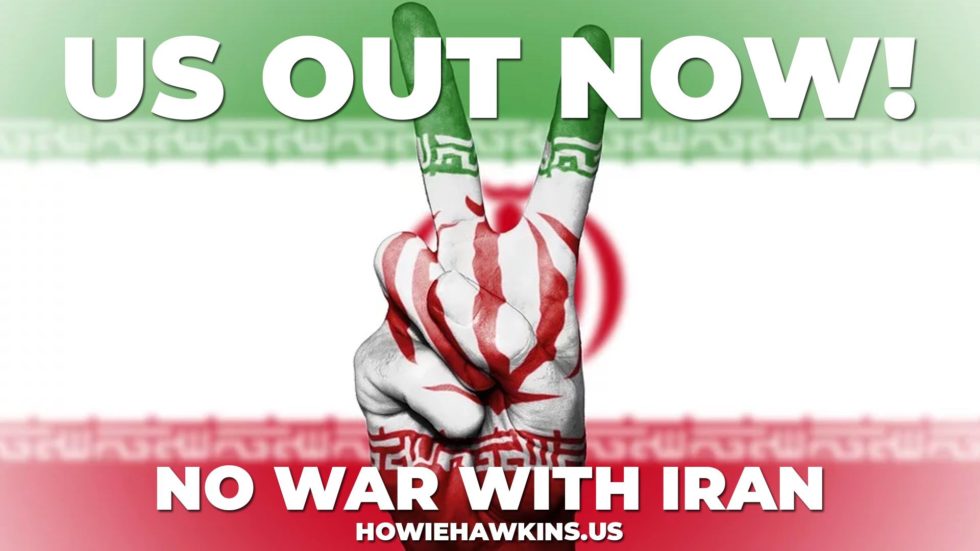 We all need to take to the streets tomorrow, Saturday, January 4, to demand that the US stop its war on Iran and that the US military get out of the Middle East now – out of Iraq, Syria, Turkey, Saudi Arabia, Qatar, and the Persian Gulf and Indian Ocean.

Demonstrations are planned for dozens of cities. If you don’t find a protest near you on the Popular Resistance website, organize one.

Demonstrations demanding US TROOPS OUT OF IRAQ and NO WAR/NO SANCTIONS AGAINST IRAQ were called earlier in the week for Saturday. Now we must demand: STOP THE US WAR ON IRAN.

With Trump’s targeted assassination of the second most powerful government figure in Iran, its military leader Qassem Soleimani, the US has started a hot war with Iran. Iran is a country of 80 million people, a major military power allied with Russia and China, with whom last week Iran conducted joint naval exercises. Iran can respond asymmetrically against US military deployments and American citizens anywhere in the world, but this war could well escalate into a nuclear world war.

Saturday’s demonstrations cannot be one-off. They must be the start of a sustained movement demanding that the US stop its war on Iran and get its military out of the whole Middle East.

Given Trump’s record of one-off military and diplomatic actions, his hollowing out of the State Department, and his firing of general after general in his administration, we must assume that Trump has no strategy for de-escalation and diplomacy after his assassination of Soleimani and welcomes a big war.

Trump may be “wagging the dog” to rally Americans around the flag in order to boost his support in an election year. He has never reached more than 45% favorability. He faces impeachment and the prospect of a rocky general election, as well as many criminal indictments if he loses the presidency. He may see war as his way out.

One can’t overstate how provocative Trump’s assassination is. It’s as if Iran had taken out Dick Cheney during the Bush/Cheney administration. The whole Middle East sees this as starting a war with Iran.

War will certainly serve to rally Iranians and Iraqis around their flags. In both countries there were popular movements against inequality and corruption. But wars derail popular democratic movements. In Iraq, the movement was multi-confessional but dominated by Shia youth who were also demanding an end to Iranian interference in Iraqi politics. It was Shia militias under the control of Soleimani that were responsible for deaths of hundreds of Iraqi protesters. Now these Iraqi youth will be joining with their government to demand the US military get out now and stop making their country a battleground.

Some Democrats are now condemning Trump’s assassination strike, but the overwhelming majority of congressional Democrats just voted for the 2020 National Defense Authorization Act that told Trump he had unlimited authority to launch a war with Iran after it deleted a bipartisan provision requiring the president to get explicit congressional authorization for military action against Iran. None of the Democratic presidential candidates is calling for the withdrawal of US military forces from the whole Middle East.

The only way we are going to stop this war and end US imperialism across the Middle East is with a massive and sustained movement. Come out to protest Saturday and then organize your next steps in your community, from lobbying your congressional delegation to running Greens for Congress on antiwar platforms and returning to the streets again and again with more and more people.