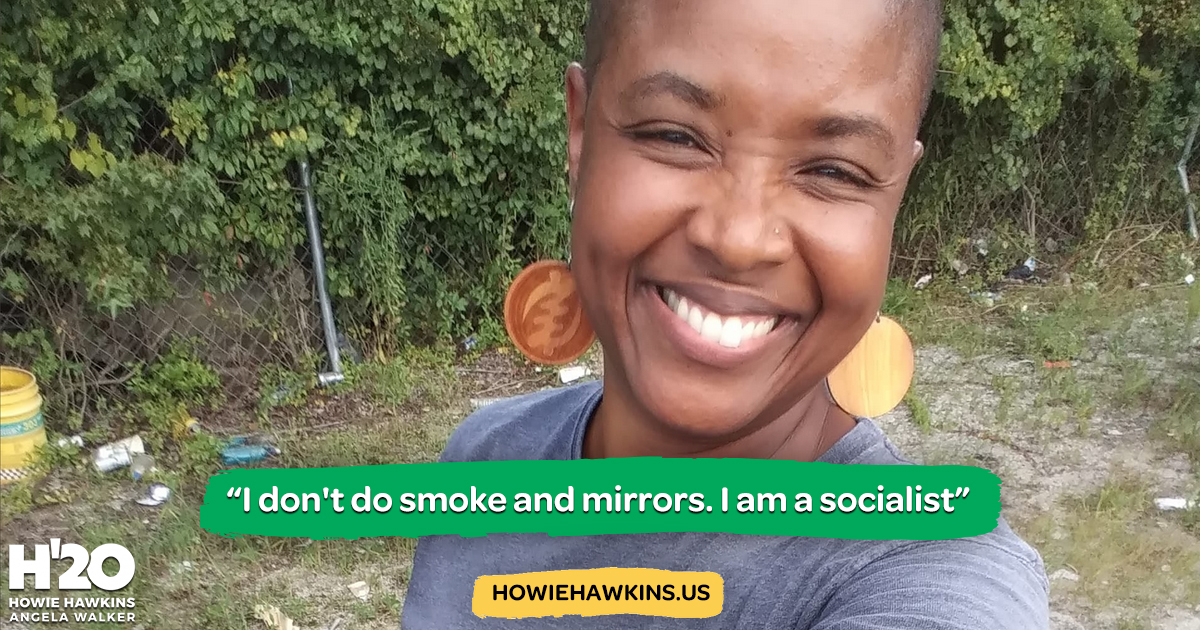 "Which candidates are actually talking about measures that will change the system that enables police to continually murder Black people and other people of colour with impunity? The system, this system, is inherently flawed. And we are the only party talking about that."

That's Angela Walker, Green Party candidate for vice-president. She's on the ticket in thirty states, yet most voters have never heard her name.

They haven't heard of her running-mate, Howie Hawkins, either. "The campaign that Angela and I are running on," he says, "according to public opinion polling, is the most popular platform. People want a Green New Deal. They want Medicare for All. They want the cancellation of student debt and free tuition at public colleges and universities. They want to get out of these endless wars."

Many of their ideas on climate change follow the lead of top researchers, scientists and the United Nations. But they are treated as marginal.

Talking to me ahead of a rally in Minneapolis, Libertarian candidate Jo Jorgensen is caustic about Trump and Biden. "Neither one has an answer to the question of healthcare costs, and neither one is going to bring the troops home. So a lot of voters have been saying to me, it's nice to have somebody that I can actually vote for, rather than against."

But despite expressing popular sentiments, despite echoing the views of people I speak to in New Orleans, where I live, or on a recent trip to Kentucky, in the US electoral system, these are fringe candidates.

Many of the people I've spoken to don't talk about ideas for how to invest in the sustainability of the planet, their health and their communities. Instead, they tend to talk about their fears.

And for Walker this is how the Democrats and Republicans retain their grip, "Stop voting from a place of fear… How about we look forward to what it is we actually want, the kind of country we actually want to live in?"

The US political system places numerous blocks between third-party candidates and voters.

"Ballot access is a huge issue" says Hawkins, describing how he spent a month campaigning in Pennsylvania only for the Democrats to succeed in getting him struck off the ballot, because a Green Party official had sent documents in separate envelopes rather than together. "In New York, we need 3,500 signatures. We had six weeks to collect them. In Indiana, over 40,000." In the UK, he points out, each candidate for Parliament needs just ten. In India, it's two.

Jorgensen managed to get on the ballot in every state, but believes the media plays a huge role in preserving the two-party system. "Having a third person on the ballot in all fifty states who every single American in this country can vote for and they're not reporting on it. I would say they aren't doing their job."

Greens and Libertarians agree that fighting the amount of corporate money funneled into politics is an uphill battle. "Corporations will actually write the law, hand it to a congressperson, and the congressperson introduces it as a bill," said Jorgensen.

An investigation by the Center of Public integrity in 2018 revealed that these 'model laws' push an agenda by special interest groups including limiting access to abortion and the rights of protesters. By pushing these laws through, politicians make friends who in return will donate to their campaigns in the future.

For the Greens, the solution is "full public campaign finance, on the clean money model", explains Hawkins. "They do this in Arizona and in Maine for state elections…. You qualify by getting a reasonable number of small $5 donations, then you run on public money, not private money."

Candidates like Hawkins and Jorgensen are keenly aware of what they're up against. They aren't running to win this year's election (although, they'll never openly admit to that.) They're in it for the long game and are relying on Americans to think in terms of what they need instead of settling for the lesser of two evils. "When they go to the polls, I hope every American realises and values the freedom we have in this country that we're slowly turning over to the people in Washington," said Jorgensen.

'I don't do smoke and mirrors: I'm a socialist'

"I don't do smoke and mirrors. I am a socialist," says Walker. "Black people in this country have a very proud history of being socialist. I know that they've been using "socialist" as a curse word to hit each other back and forth. And you know, all we do is laugh: I mean, you want to talk to some socialists, we right here!

"Our job in this country is also to educate people about what socialism is, how it improves people's material conditions, and how we can align it with the needs of the planet."

Jorgensen has a very different perspective. For her, the problem is an overweening state. When I ask her if she supports the Black Lives Matter call to defund the police, for example, she replies: "Crime is a local issue. I would allow each different jurisdiction to decide how they want to handle their policing. And I would absolutely end giving tanks and tear gas and grenade launchers to the over 8,000 federal state and local police forces.

"If you're sitting in Austin, Texas, or Albuquerque, New Mexico or Charleston, West Virginia, and they put a referendum on the ballot: 'Would you like your taxes raised so that our police department can go out and buy a tank?' most people would say: 'No, I'd rather keep that extra money, maybe walk to a nice dinner or go to a nicer vacation'.

"But what happens is the federal government takes that money from us, then they buy the tanks and tear gas. And then they dangle it in front of the police department. So that 'OK, do you want a free tank?'"

If the polls are right, Biden is going to be the US president. The system will hold itself together. For now. But anyone who can smell the air can tell that something is going to break.