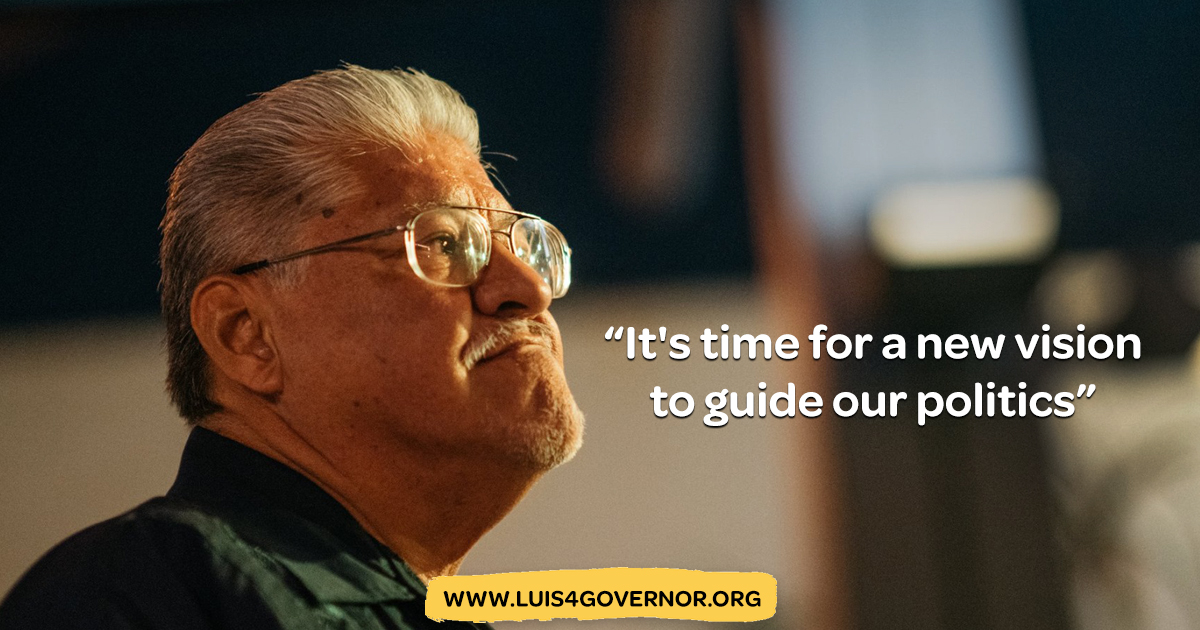 California is a wondrous garden, a land of great plenty and immense resources. Yet for being the world's 5th largest economy, we have the highest poverty rate and homelessness of any state. We have massive agricultural, defense, shipping, and technology industries, but huge gaps between the rich and poor. There's plenty of wealth in California, but pushed into few hands, leaving far too many others struggling to barely survive.

It doesn't have to be this way. I'm running for Governor to give voice to those who agree.

I call this campaign, "Let's Imagine a New California for Shared Well-Being… Then Let's Build It."

No more poverty. No more homelessness. No more poisoned air, water, soil. No more mass incarceration. No more sanctioned deadly force and militarized policing. It's time for fully funded arts & literacy in every neighborhood, for decent housing, quality education, single-payer universal healthcare, and for public safety based on meeting needs, rather than adding trauma to misfortune.

How can we get there? It will require a major change in thinking and in representation. The economic, environmental, and social ills of our state are mostly human made, the result of failed capitalist-driven thinking where the aim of maximum profits rules.

It's time for a new vision to guide our politics. Mine is a campaign for social, economic, and environmental justice. For a society that puts people and the environment first, with justice and sustainability as guiding principles.

That kind of change comes from giving the dispossessed a voice in our politics. The most impacted must not just be at the table—they must lead. That's what this campaign is all about.

The primary election is June 7, 2022. The two highest vote getters will run against each other in the main election of November 8, 2022.

Given the political makeup of the state, a Republican is unlikely to be elected the next governor. But their candidates generally have wells of money and will continue to sow the chaos and falsifications the Republican Party are known for. On the other hand, the Democratic Party is too often inept in establishing the most equitable and just governance possible.

Where do we go from here? It's time for new voices, new choices.

A real progressive challenge to Governor Newsom is unlikely to come from the Democratic Party because few, if any, progressive Democrats who want an electoral future will endanger that future by taking on the governor.

As progressives, then, how do we vote in the June 2022 primary? Newsom will easily advance to the November 2022 general election. He doesn't need your vote to do so. Even if I get much lower numbers, if I beat everyone else, I'll be the one he'll have to face in November.

Polls indicate a growing discontent with how the Governor has managed so far. For example, he's approved 10,212 oil drilling permits since he assumed office in January 2019. During the same time, the Western States Petroleum Association has spent $17.5 million lobbying CA elected officials.

According to the Sacramento Bee, "California has failed to pass a meaningful climate bill since 2018, when the Legislature committed to achieving 100% renewable energy by the middle of the century." Instead "California's Democratic legislators are redefining climate denialism with their inaction."

A vote for my campaign says Governor Newsom should've done far more to support single-payer universal health care, like he said he would when he ran in 2018. Instead he backed away from supporting it like he did this year with AB1400.

AB1400 was this year's single payer universal health care bill, that died in the state legislature when internal Democratic Party pressure upon the author caused it to be pulled from consideration, minutes before it was scheduled for a vote on the State Assembly floor. If I was governor, not only would I have signed AB1400, but I would have used my influence with the state legislature to get it passed there first.

It doesn't stop there. The Governor doesn't go far enough to support workers. In 2021 Newsom betrayed low wage and agricultural workers by vetoing AB616, a bill that would have given farmworkers the right to vote for a union by mail-in ballot. The Governor supports vote-by-mail when his name is on the ballot. Why not the same for workers' right to organize?

My campaign—endorsed by the Green Party, the Peace & Freedom Party, and the Justice Party, among others—supports a Green New Deal. It gives voters a chance to stop fossil fuel money influencing California politics, whether with the state legislature and its Democratic super majority or going with the official policy of the California Democratic Party to accept fossil fuel industry donations.

I'm for workers' rights and dignity, including for the undocumented.

I won't accept corporate donations. I support the public financing of elections. I stand for proportional representation elections combined with a larger state legislature. Together these reforms would break the 'lesser-of-evil' logjam that limits our ability to have a governor and a legislature that truly represents the electorate.

This June progressive voters can demonstrate clearly where they stand on key issues Newsom has disappointed them on. Don't give Newsom your vote. Put me on the ballot with Newsom in November. Then the unhoused, the unschooled, and unheard will strategically and dramatically help align our politics, our governance, to the bounty and beauty that is California.

I invite any disaffected Democrats, Independents, and progressive third parties to unite with my candidacy for a shift in how we dream and deliver, in how we imagine and build.