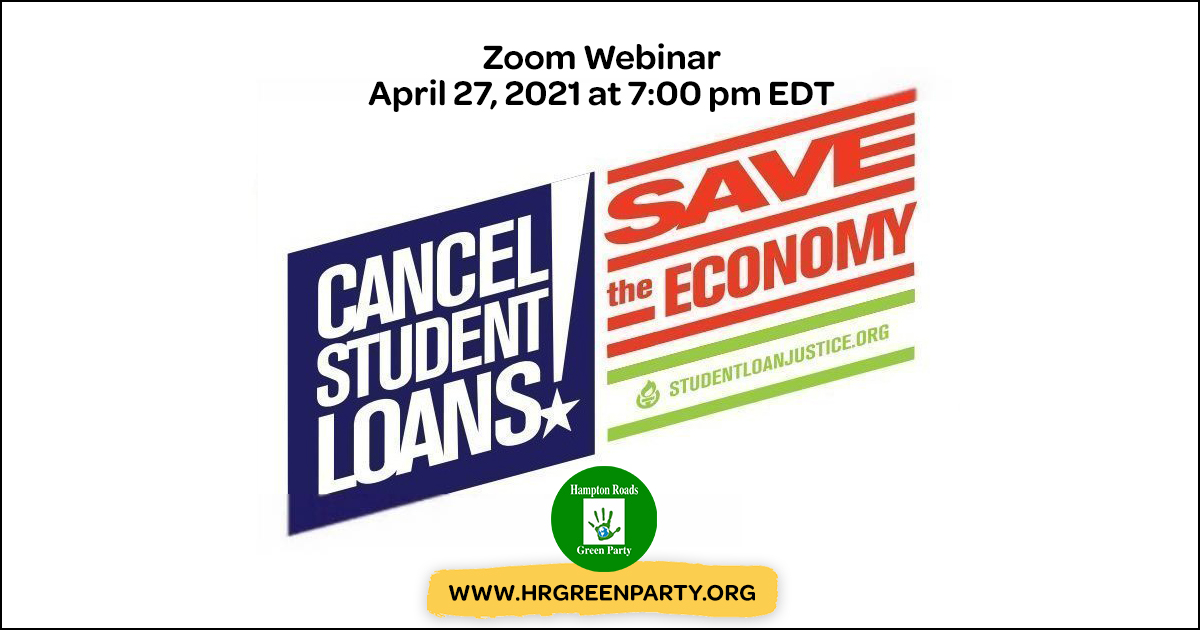 Virginia is one of 19 states that has higher student loan debt than their annual budgets! Please join us for our open to the public social night where we will be hosting Alan Collinge, founder of Student Loan Justice, to discuss student loan debt in Virginia and nationally, as well as how and why it must be cancelled for the good of our economy.

StudentLoanJustice.org is the oldest, largest, and only grassroots group in the nation fighting solely and absolutely for student loan borrowers. Specifically, the group is fighting for the return of standard bankruptcy protections to all student loans, and the cancellation of all federally owned student loans by executive order. The group comprises over 1 million members and 50 state chapter groups.

Student Loan Justice founder Alan Collinge is a student loan borrower. His experiences with his own student loans, combined with knowledge of good faith lending learned over years while he managed a small lending program on behalf of the federal government, made him realize that this is a problem the United State has never seen. He took his research to the media and to Washington and was profiled as top story on 60 Minutes.

Since then, he has authored The Student Loan Scam (Beacon Press), has written hundreds of articles in the New York Times, Los Angeles Times, etc., does frequent television and radio interviews. In 2008, he was chosen as one of 8 “financial heroes” by CNN/Money Magazine. Prior to founding SLJ, Collinge was associate scientist (aeronautics) at Caltech. He earned three degrees in aerospace engineering from the University of Southern California. Now he devotes himself full time to SLJ.

Established in 2005, the group has been featured on 60 Minutes, in the New York Times, Wall Street Journal, CNN, CNBC, PBS, NPR, Fox News, MSNBC, Rolling Stone, VICE news, Fast Company, and many, many other places. They are credited with inspiring several key pieces of legislation, and starting the current national conversation around both student loan cancellation, and bankruptcy protections. The group is fiercely non-partisan.