Space Coast students 'strike' for action on climate change; how it affects Florida 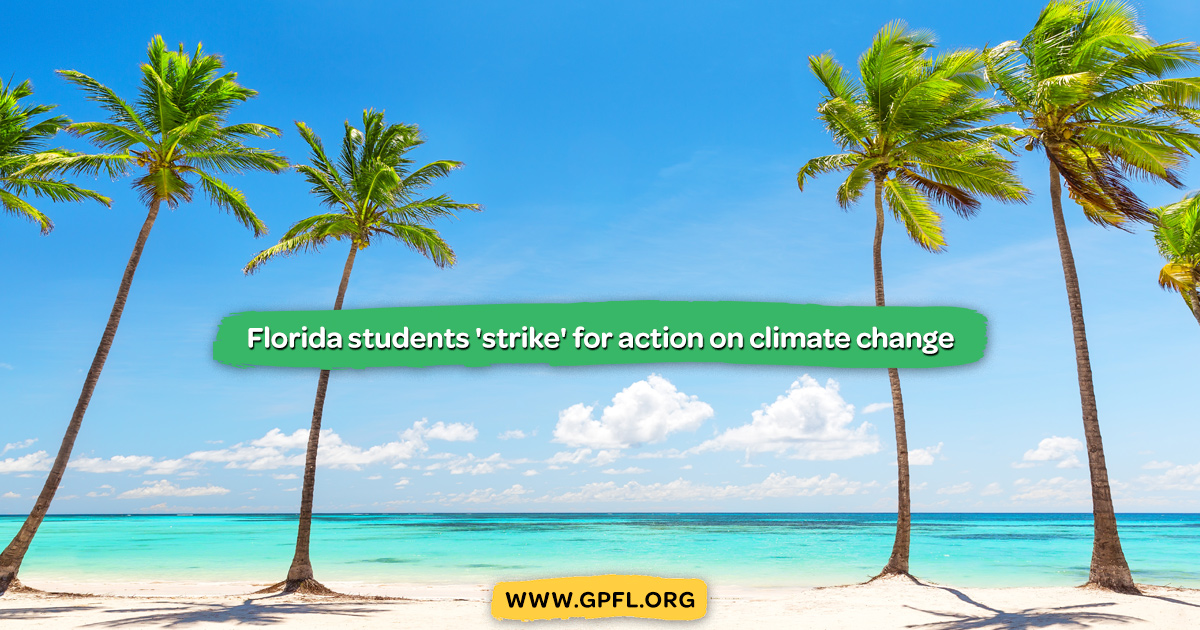 Those dire predictions are why young people worldwide have been skipping class, and demanding governments take action. But are their worries well-founded, and what's the climate future hold for Florida? Some students feel the Sunshine State is already feeling the heat.

Cook didn't need to skip class last Friday. Her event was after school. But over the past two Fridays, countless other students nationwide skipped school to prove a point, inspired by a Swedish teenager who's been doing the same for more than a year to push for action on climate change.

Last Friday, student and other activists rallied in Cocoa Beach and on the Eau Gallie Causeway in Melbourne. This past Friday, Florida climate strike events took place in Jacksonville and at Florida Gulf Coast University and elsewhere around the nation and globe.

The events joined an international Youth Climate Strike inspired by Swedish climate activist Greta Thunberg, 16, in support of the Green New Deal and to coincide with this month's United Nations Climate Action Summit.

Thunberg is at the forefront of the movement, first gaining notoriety last year when she began skipping classes on Fridays to hold a protest sign outside of Swedish parliament, demanding action on climate change. The UN summit aimed at concrete actions, beyond the "empty words" that Thunberg recently told the UN that had stolen her dreams and her childhood.

"We are at the beginning of a mass extinction and all you can talk about is money and fairy tales of eternal economic growth. How dare you," Thunberg told the UN in an emotional speech that drew much media attention last week.

To advocates of the Green New Deal, the policy proposals are analogous to Franklin Delano Roosevelt's New Deal that helped lift America out of the Great Depression. To its opponents, they would cause another depression. Central among the initiative's goals is converting to 100% renewable energy by 2035 or sooner. But to opponents of the Green New Deal, the policies it proposes would cost trillions of dollars, crippling economies, with uncertain environmental benefits.

"Our house is on fire," Global Climate Strike's website says. "The climate crisis is an emergency but we’re not acting like it. People everywhere are at risk if we let oil, coal and gas companies continue to pour more fuel on the fire."

But is that hyperbole, what's at stake in Florida, and just how bad might climate change impacts get in the Sunshine State?

Here's how global warming could shake out in coming decades in the Sunshine State:

Flooding could worsen as more mammoth hurricanes move move sluggishly along their paths. A 2018 study in the journal "Nature" suggests more such outcomes due to hurricanes slowing down. It's already happening, researchers say: Hurricanes have slowed by about 10 percent between 1949 and 2016, the researchers found, bringing longer suffering to those in their paths.

Imagine more hurricanes like Irma, Harvey — or stronger — that hover over coastal communities longer, allowing them to dump record-setting deluges that devastate lives and property.

"All of the bad things that come with a hurricane get worse," said Jim Kossin, the paper's author and a scientist with the National Oceanic and Atmospheric Administration, or NOAA, said shortly after his paper's publication last year. "You get the winds acting on things longer. You get increased storm surge."

But the most direct impact will be Hurricane Harvey-like rains — overall, a 10 percent increase in rains over a given area.

As in Harvey, hurricanes that stall wind up dumping lots of rain in one geographic area. Harvey, a Category 4 storm, slammed Houston, Texas, in August 2017, dumping more than 40 inches of rain in some areas.

Researchers aren't sure whether the hurricane slowdown is driven by climate change or is simply a natural variation.

And the stronger hurricanes will ride in along higher seas.

In his 2015 paper in the journal "Florida Scientist," George Maul, an oceanographer at Florida Institute of Technology, projected at the current rate of Florida sea-level rise, all coastal communities including those along the Indian River Lagoon would experience at least eight inches by the end of the century.

The Intergovernmental Panel on Climate Change estimates global sea-level rise to be no more than one meter (39 inches), Maul notes. But the National Oceanic and Atmospheric Administration predicts sea-level rise could be up to two meters.

But Maul warns of reading too much into global warming's influence on hurricanes, "We should not look at Hurricane Dorian solely as a climate-caused event, devastating as it is," he said. "Remember that the 1935 Florida Keys hurricane was the strongest wind event in state’s history – over 80 years ago."

Because much of the carbon dioxide entering the atmosphere gets dissolved in the ocean, Florida and the rest of the planet can expect a phenomenon called oceanic acidification to increase.

"This will stress our coral reefs," Maul says. "Other stressors include temperature events (both warm and cold), salinity events and overfishing. The CO2 also acidifies our atmosphere, so acid rain will increase."

One theory is that climate change may be driving more frequent and intense El Niño events, resulting in heavier rains that pulse excess nutrients from land into coastal waters, fueling more potentially toxic drift algae and phytoplankton blooms, like the ones recently found in Lake Washington, a main source of drinking water for Melbourne.

Among global warming's other ill effects from warmer waters, sharks and other migratory fish also could pay a heavy price.

Florida Atlantic University researchers in recent years have been documenting a dramatic decline in the number of blacktip sharks that migrate to South Florida in recent years. They estimated the population to be about one-third of what it used to be.

Warmer coastal waters have resulted in more sharks lingering in Central Florida, North Florida and as far north as the Carolinas, they say, where cloudier waters near inlets that supply schools of bait fish put more people in the water near more sharks, and at greater risk of getting bitten. The researchers stopped short of blaming climate change but said the new migratory patterns in sharks could be a glimpse at what's to come in a warmer world.

"And don’t forget that energy production always requires the exhaust of waste heat (second law of thermodynamics)," Maul adds. "No matter how we generate electricity (e.g. solar cells), we’ll have waste heat, and will be warming the state — so even if we went on a very low carbon-based energy economy, we’ll generate waste heat — and all those new (and current) Floridians will want air conditioning and WiFi and transportation, and you name it."

Meanwhile, children around the globe worry of their future in a warmer world, especially in Florida.

One Brevard County boy, Levi Draheim, 12, is among 21 young people suing the federal government. He and the other plaintiffs filed a lawsuit in 2015 claiming Washington has violated their rights to life, liberty and the pursuit of happiness by permitting and sometimes subsidizing the fossil fuel industry.

But China, India and other big global polluters would all have to reduce emissions, scientists say, to make a significant dent in the predicted climate change impacts.

"It will take many changes in our way of doing things to successfully navigate our future," Maul said.

He sums up the climate change conundrum this way: "The trick I suppose is how to have all these things happening at once, and have a sustainable economy and environment?"

Maul cites American journalist and essayist H.L. Mencken’s famous adage as a relevant warning: “…there is always an easy solution to every human problem – neat, plausible, and wrong.”