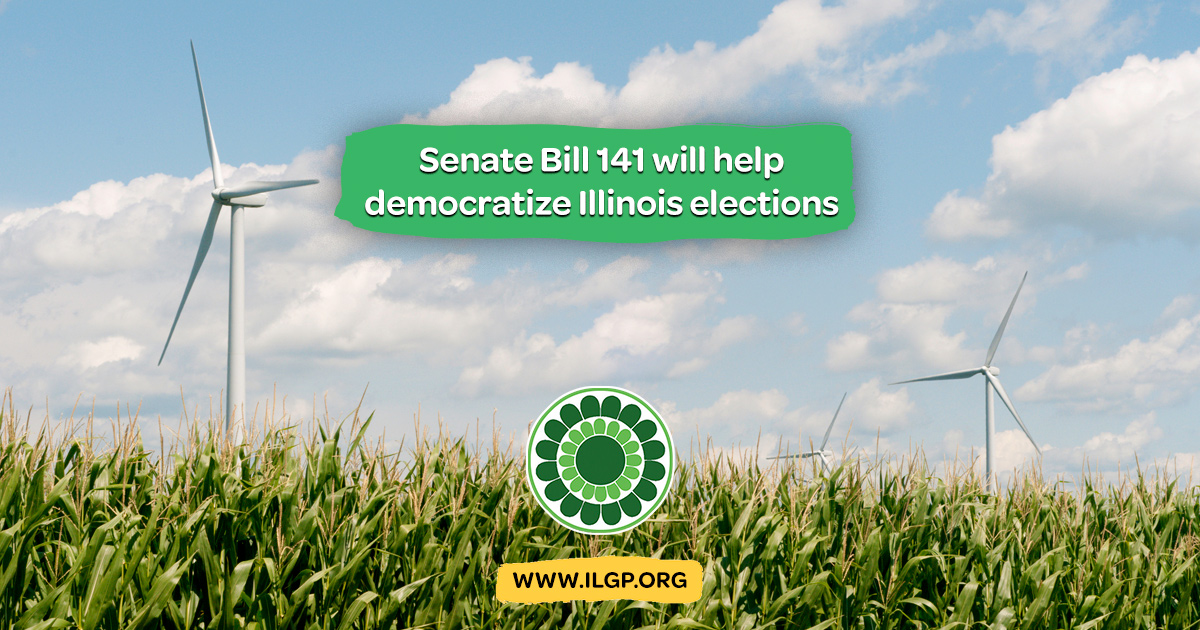 The United States takes pride in calling itself a "democratic" republic, with "free and fair elections." Yet Illinois election laws are fixed to give a huge advantage to the candidates of just two political parties, stifling all other competition. Such a system cannot justly be described as "democratic" or "free and fair." That is why the Illinois Green Party urges Illinoisans to speak up and take a strong stand in support of Senate Bill 141.

Illinois has one of the most repressive, restrictive and grossly unfair ballot access laws in the United States. For example:

Polls consistently show that a majority of Americans support having third (or fourth) party choices on the ballot. Yet their desires are frustrated by unfair ballot access laws like those in Illinois.

The excuse given by the established parties to justify these laws is that they are needed to avoid having "too many" parties or candidates on the ballot. In court, they have defended these laws as necessary to avoid "ballot clutter" and "voter confusion" (yes, they have actually used those terms!) – as if voters would get hopelessly "confused" having to choose between more than two options. This argument is not only contrary to the public interest, it is an insult to Illinois voters.

Far from avoiding "ballot clutter," the actual result of these laws is to have extremely uncompetitive elections, with many incumbents not even having to face any challenge at all. For example, out of Illinois' 118 State Representative races in 2018:

Senate Bill 141 will take a giant step toward solving this problem and making Illinois' ballot laws fairer -- simply by making the petition signature requirements equal for all political parties. This is not a complete solution. Democratic and Republican candidates will still have the advantage of being able to petition sooner and securing their ballot position sooner. However, making the petition signature requirement equal is the single most important step that could be taken to create a more equitable and democratic system in Illinois.

Please take a stand today and do what you can to help get this important pro-democracy bill passed!

We are also asking for your support on a number of anti-fracking bills this legislative session. We will follow up with more information soon, but meanwhile, you can view this summary at the website of the Illinois Coalition Against Fracking, a coalition supported by the Illinois Green Party.

Save the date! Our Spring Conference will be held on Saturday, April 13th, at Citlalin Gallery, 2005 S. Blue Island, Chicago. This will be a one-day conference with an emphasis on discussing strategy for 2020; it will also include election of officers for the next year and other important party business. There will also be a fundraising dinner. Details to be announced.

Reminder: If you have not already done so, please become a dues paying member of the Illinois Green Party. Becoming a duespaying member is a requirement for participating in our decision-making. We are a grass-roots party and we rely on member contributions – no corporate funding allowed – to finance our activities. This is the party that fights for you, but we ask you to support it. A political party is only as strong as its members make it, by what they do or fail to do. For "us" to succeed, you need to be an active part of "us." We are not asking a lot – standard dues are just $60 a year, and only $12 a year for persons of low-income – but we do ask you to make this modest contribution to help our efforts to build a better future for all Illinoisans.