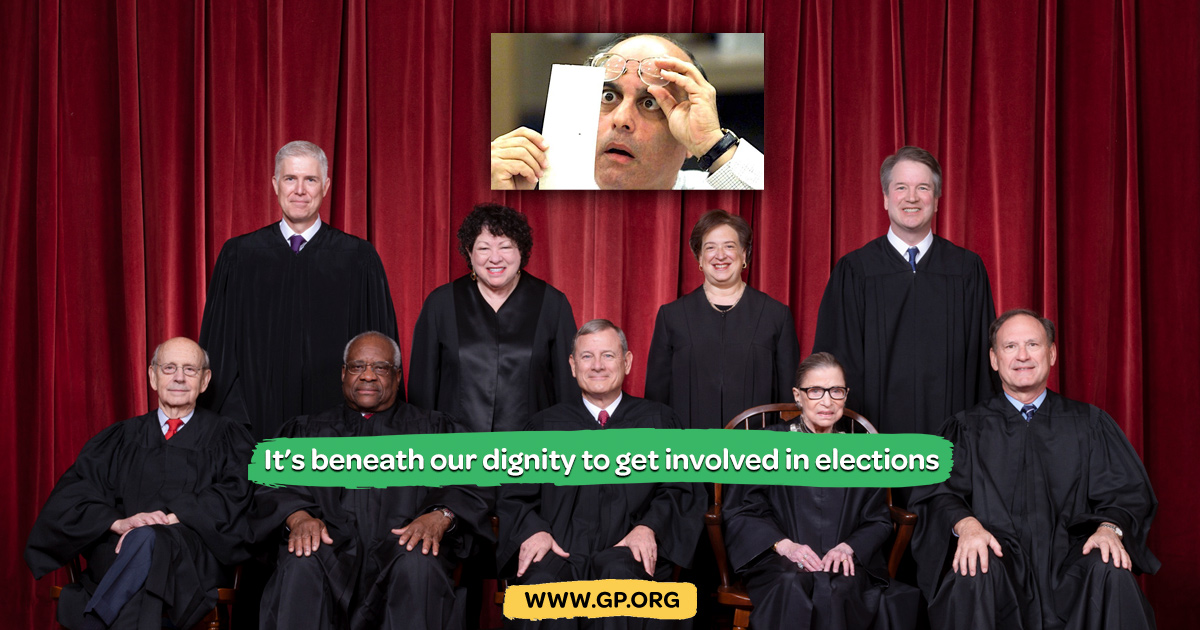 The Green Party (GPUS) opposes yesterday's 5-4 Supreme Court decision in Rucho v. Common Cause, in which the majority opinion ruled that partisan gerrymandering presents issues "beyond the reach of the federal courts." Instead of getting mired in the back-and-forth politics of gerrymandering, the GPUS calls for a system of true voter representation--a proportional voting system that virtually eliminates the possibility of gerrymandering instead of countering its effects on one party or another. "The Supreme Court ruling was unquestionably shameful in its reasoning," said Tony Ndege, Green Party. Co-chair of the Green Party of North Carolina. "Gerrymandering is fundamental to a two-party, winner-take-all system that favors the parties of the rich. That system itself is anti-democratic because the major parties use it to take voters for granted with no intent to represent them in government, all the while paying fealty to their corporate bosses."

Gerrymandering has been used for over two hundred years by political parties jockeying for power to meet ideological and political ends. Often those political ends include the blatant disenfranchisement of people of color, independent parties, students, the poor, and urban voters.

In North Carolina, where Republican lawmakers no longer bother to hide their intent, Republican state senator David Lewis was quoted in the Washington Post in 2016: "I think electing Republicans is better than electing Democrats. So I drew this map to help foster what I think is better for the country."

Greens in North Carolina witnessed the effects of gerrymandering in 2018, their first ever year on the ballot, when NC U.S. Congress District 13 inaugural congressional candidate Robert Corriher faced several obstacles. "I would laugh with my colleagues that my district map kind of resembled the shape of a cow," Corriher said. "District 13 divided straight through the east side of my county, where my closest constituents are, skipped over a more urban county, and then it spread out over a large rural area encompassing three other counties. Outrageous." Corriher ran on a platform that included increasing federal funding for HBCUs (Historically Black Collegiate Universities). His hometown HBCU, NC A&T State University - the largest in the country, was split in half between two congressional districts due to gerrymandering. "I would tell people where the closest early voting site was and then come to realize that it was right next to campus housing in another district," said Triad Greens co-chair Veronica Ancrum.

In Maryland, where Democrats have a decades-long veto-proof majority in both houses of the legislature, the Supreme Court overruled a district court ruling that had struck down the map for Maryland's sixth district. Former Demcoratic state officials intentionally drew this district to disenfranchise Republicans in western Maryland. Maryland Democrats are fond of saying that complying with the lower court ruling would amount to "unilateral disarmament," vowing not to draw constitutional districts until North Carolina does.

Maryland Green Party Co-chair Andy Ellis said, "In Maryland, a Democratic Attorney General sided with North Carolina Republicans in appealing to the conservative justices on the supreme court to defend the right to draw explicitly partisan districts." He continued, "In Maryland, it's Democrats who abuse the constitution and the voters for political gain"

The Green Party supports the replacement of the winner-take-all single seat district with proportional representation across multi-seat districts, which more accurately represents the political will of their actual constituents. These systems are well-understood and used in many other countries. Proportional representation can be used across a district or a state, for local, state or federal elections.

"Plurality voting supports the two-party systems, and the two major parties have long used it to game an electoral system that fails workers and citizens who face systemic social and economic disadvantage. The added obstacles of gerrymandering, along with partisan control of polling places and early voting, and creation of registration barriers, has shut large numbers of citizens out of democratic participation altogether," says Wayne Turner of the North Carolina Green Party. "It's time to acknowledge that plurality voting is a poor way to choose candidates in what is supposed to be a representative democracy."