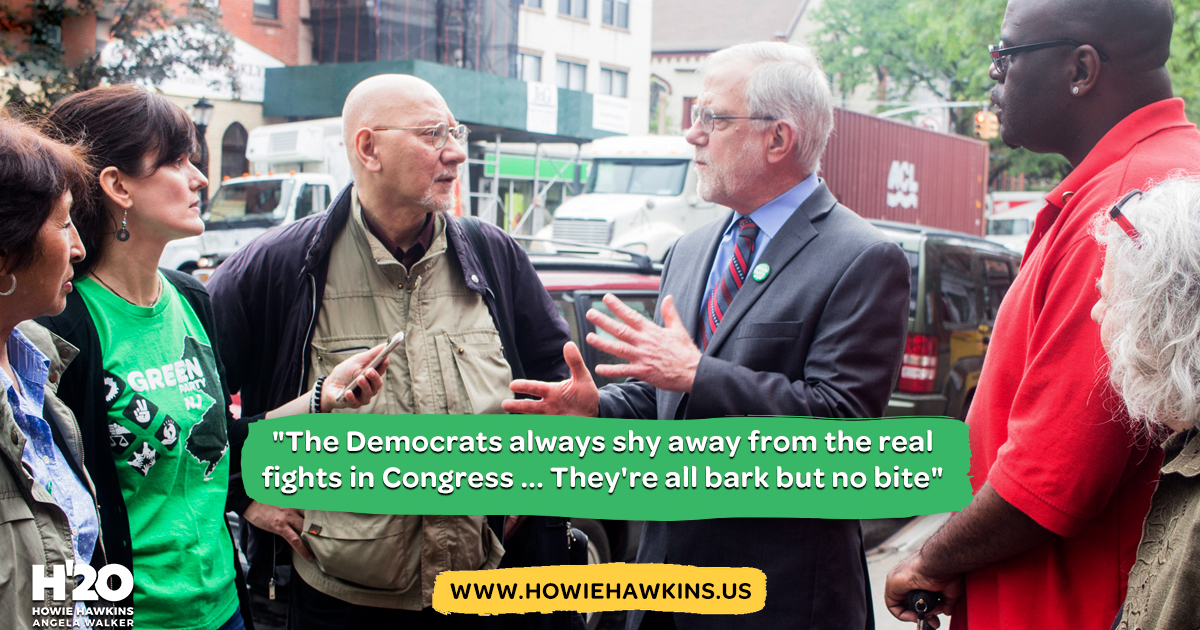 Howie Hawkins, the Green Party candidate for President, said that while the nomination of the new Supreme Court Justice should wait until the next presidential term, it was also important to reign in the powers of the court, which he described as "an unaccountable, unelected super-legislative council of lifers."

Hawkins challenged Senate Minority Leader Chuck Schumer and the Senate Democrats to finally stand up to Senate Majority Leader Mitch McConnell and use the minority's parliamentary powers to delay the nomination. "The Democrats always shy away from the real fights in Congress, like we saw with their delay on impeachment and continuing unwillingness to challenge Attorney General Barr. Joe Biden shepherded through Clarence Thomas, Antonin Scalia, and Anthony Kennedy as chair of the Senate Judiciary Committee. The Democrats allowed McConnell to roll them on the Merrick Garland nomination in 2016 without obstructing the Majority Leader with parliamentary maneuvers. They're all bark but no bite," he added.

Hawkins said he would be open to increasing the size of the court. In fact, the number of justices has been modified several times previously in the country's history. As President he would focus on reigning in the powers of the increasingly rogue Supreme Court. The Constitution gives the Supreme Court original jurisdiction over a limited number of matters, mainly relating to suits between states. Its appellate powers are subject to the "exception and regulations" enacted by Congress. As an example of a reform of SCOTUS, Hawkins would push to remove their power to overturn federal legislation, or at a minimum require a supermajority.

Congress can also legislate to reverse court decisions, such as restoring the preclearance provision in the Voting Rights Act, and to protect people's rights, such as codifying Roe v. Wade on abortion. Hawkins said it was also time to impose term limits on the justices rather than allowing them to continue to serve for life.

"The Supreme Court has always been an undemocratic institution, primarily protecting the property rights and powers of the rich and powerful. Whatever legitimacy it had as a council of senior legal experts has been destroyed by its increasing partisanship, including installing George W. Bush in the White House in 2000. Both major parties now just focus on packing the court," Hawkins said.

Hawkins noted that the court has long been a champion of corporate power. It created the court-invented doctrine that money is speech rather than simply property, which has enabled the rich to more readily buy elections. Another court-legislated doctrine is that corporations are persons with constitutional rights like natural persons. This corporate personhood doctrine has greatly increased corporate power and shielded corporations from regulation. Hawkins called for passage of the We The People Amendment to the US Constitution (H.J. Res. 48), which would end the money is speech and corporate personhood doctrines.

The recent Democrat appointees, including Ruth Badder Ginsberg, have been neoliberals on economics who agree with the conservative justices on corporate power. Like the rest of the body politic, the court has shifted far to the right, with the current liberal bloc being centrists by historical standards and much to the right of recent liberal standard-bearers such as William Brennan and Thurgood Marshall. Today's SCOTUS liberals would have been on the right in Earl Warren's Supreme Court. The court is the most business-friendly in a century.

Since the US Senate runs on a unanimous consent system to do even its most basic business, the Democrats can simply grind everything to a halt by refusing such consent. They can force the GOP into time-consuming steps every day, such as forcing the reading of entire bills aloud. They can also hold up the federal budget (especially since the GOP has refused to move on COVID-19 relief for months).

The Democrats could hold up a nominee with impeachment proceedings, which take precedent before all other business in Congress. They could impeach Trump again, charging him for all of the myriad abuses he has committed, from unlawful actions that hurt workers, consumers, and the environment, to personal enrichment at the expense of taxpayers, to attempting to undermine this year's presidential election. Attorney General William Barr could be impeached for corruptly subverting the Mueller investigation and report, unlawfully seeking sentence reductions or acquittals for convicted felonious Trump cronies, obstructing congressional investigations, and violating the First and Fourth Amendment rights of citizens engaged in nonviolent demonstrations.

"The Democrats use Supreme Court appointments to try to scare people into voting for them. What they don't tell people is that they have allowed the court to evolve into a far more powerful and reactionary body than the founders ever imagined. It is time that we the people demand reigning in the power of the court," Hawkins added.