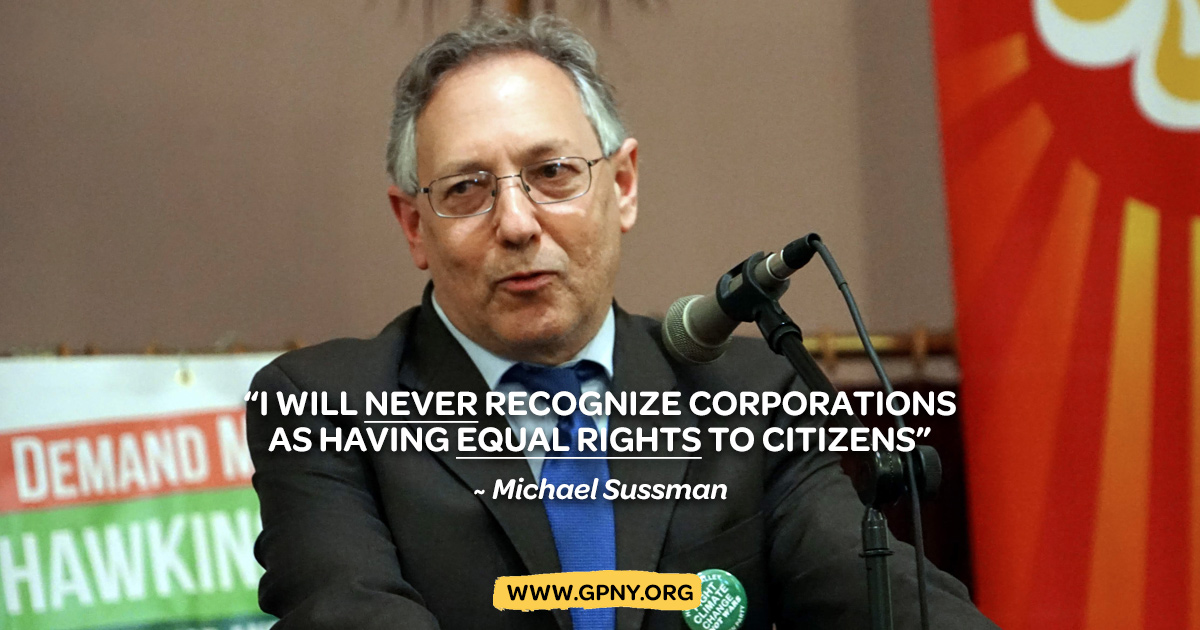 Michael H. Sussman, an attorney from Orange County, proudly announces that he is seeking the Green Party nomination for New York State Attorney General. Sussman is a 1978 Honors Graduate of Harvard Law School and has been one of the Hudson Valley's most prominent civil rights and trial lawyers since the 1980's when, as lead counsel for the Yonkers Branch of the NAACP, he helped end racial segregation in the City of Yonkers public schools.

While at Harvard Law, Sussman worked with Ralph Nader and Mark Green to found the Equal Justice Foundation, an organization of law students which advocated for more permissive standing doctrines and the demystification of the American judicial system. Sussman served as the first Chair of that national organization. He also worked with Professor Laurence Tribe in 1976-77 on the first edition of the great constitutional scholar's masterpiece, American Constitutional Law.

In October 1978, as part of its Honors Program, Sussman joined the Civil Rights Division of the United States Department of Justice in Washington, D.C. Sussman won awards for outstanding service in 1980 and 1981 but left the Department after Ronald Reagan's first Attorney General,  William  French Smith, announced that white males were the group most in need of the Civil Rights Division's  assistance.  After litigating  major  school desegregation cases in Cleveland, Charleston, South Carolina and Flint, Michigan,  Sussman joined the NAACP National Office in May 1981.

Sussman represented the Yonkers Branch of the NAACP between May 1981 and May 2007, when Judge Leonard B. Sand, closed the case. In 2002, Sussman negotiated an agreement with the State  of New York which provided the City of Yonkers $300,000,000 to eliminate the vestiges of segregation in its schools. He also negotiated a major settlement of the NAACP's related housing discrimination  claims,  gaining more than $100,000,000 from the City of Yonkers, HUD and the State of New York for a myriad of programs and initiatives to help integrate white neighborhoods in Yonkers. At the NAACP, Sussman also litigated numerous voting rights cases.

In January 1986, with his father, Morton, Sussman founded his own small law firm, starting in the building next to Yonkers City Hall. Through that firm, Sussman brought hundreds of cases for victims of racial, gender and national origin discrimination in employment and victims of police brutality.

Sussman is well known for major legal victories, including the $6,000,000 settlement he attained for the family of DJ Henry, a Pace University student shot to death in October 2010 by Aaron Hess, a police officer employed by the Village of Pleasantville, his representation of the ever growing dissident movement in Kiryas Joel which culminated in major victories starting in the 1990 decision by Judge Peter Patsalos of Orange County Supreme Court which ordered the main Kiryas Joel congregation to re-admit seven children expelled from a Yeshiva because their father, Joseph Waldman, had the temerity to run for a seat on the newly created public school board in Kiryas Joel.

Between 2006-2010, Sussman represented a class of 4,700 African­ American and  Hispanic state workers [against the Attorney  General's office] in a lawsuit challenging the promotional test used by the State of New York for  civil service promotions. The case ended in a settlement of $45,000,000 for the class.

Starting in 1986, Sussman also has done pioneering work in special education law, representing scores of disabled children in their quest for proper education placements and programs. He and his firm represented a class of non-verbal 3-5 year old autistic children who were abused in a highly renowned program run by the Mahopac School District. Sussman has also fought for the rights of disabled adults, winning a multi-million dollar settlement for a group of adults institutionalized at SLS in Putnam County.

Sussman has also litigated numerous cases challenging various forms of environmental degradation and public corruption. Most recently, he has represented citizens fighting CPV, a power plant dependent on fracked natural gas from Pennsylvania. Sussman mounted a necessity defense for six Orange County residents who engaged in civil disobedience to dramatize the contributions that plant would make to climate change. In the early l990's, Sussman was lead counsel for Orange Environment, preventing the opening of a new massive landfill on a site which covered the principal aquifer feeding southern Orange county and was adjacent to the Wallkill River. Sussman also serves as lead counsel to Concerned Citizens for the Hudson Valley in its fight against the spot zoning which allows Legoland into the Town of Goshen.

Sussman has also fought against sexual harassment and gender discrimination, winning the Carrero case in the last l 980's and setting the foundation for much sexual harassment litigation which followed in our federal courts.

Sussman also feels strongly about the rights of  our  senior  citizens to safe, affordable health and nursing care and was lead counsel in the successful fight to keep Valley View, Orange County's nursing home open.

Explaining his decision to seek the Green Party nomination for Attorney General, Sussman commented, "I have spent forty years as a lawyer fighting for equality, justice and the rule of law. I have watched our state government turned into an intolerable cesspool. Only a different political party can provide the change we need. Both major political parties are responsible for the mess we are in. They feed off each other. They work together. They need to be challenged. I have witnessed Mr. Cuomo tolerate corruption repeatedly; while claiming to represent regular New Yorkers, he raised millions of dollars from special interest groups and then caters to their agendas. I have watched the Republican Party stand against women's rights, prudent measures to control guns, major innovations in public education. Neither party has fought corruption in Albany and both have been participants in pay for play at the highest level. It must end now!

"We need new leaders who are ENTIRELY independent of monied interests and whose only allegiance is to our people and the Constitution of the United States and our state and our laws. I have a proven record of advocacy which far exceeds that of any other candidate for this position of whatever party.  I have successfully litigated against the Attorney Generals office for several generations and can promise New Yorkers one thing: no one will ever own or control me and I will do your business. And, when New York State agencies discriminate, I will NOT knee-jerk represent them in Court. I will settle cases where I determine wrongdoing has been perpetrated, applying principles of restorative justice and equity. I  will  not maintain  the arrogant bureaucracy which has defined the NY State Attorney General's Office regardless of whether it was run by Cuomo, Spitzer or Schneiderman.

"I know that office well and I will radically change its commitment. It will focus on doing justice, not defending entrenched, often racist and sexist state policies. Nor will I defend corrections officers who manhandle inmates. I will fight to replace a bail system which disproportionately incarcerates the poor before trials and without risk of flight.  I will work with citizens around out state who want to extirpate discrimination in sentencing in our state and fight hard to implement current laws which prohibit employment discrimination against ex-felons. Again working with many allies around the State, I will help ensure that New York State does not create an infrastructure which promotes last century fossil fuel and will champion laws which enable solar, wind and other forms of renewable to  be expeditiously produced and marketed. I will fight against federal policies which stigmatize hard-working immigrants and destroy their families and will oppose any federal efforts to punish sanctuary cities or religious institutions.

"I will work tirelessly to promote equality under the law and sponsor citizen court watching programs which make our judges accountable for their conduct. Every judge in New York will be civil to all those who appear before him or her and, as Attorney General, I will be entirely transparent, holding seminars on critical legal issues throughout the State.  I will also fight for  greater transparency in our legal system, televised trials and court proceedings and the efficient processing of each case.

"In short, I will be an Attorney General for all our people, citizens and non-citizens alike. And, I will never recognize corporations as having equal rights to citizens. Instead, during this campaign, I will take no more than $118 from any natural born person and not a cent from any LLC or corporation.

"So, today, I ask all New Yorkers to set aside party affiliation and support the candidacy of a person you can count on to set a new course in and for the administration of justice in our State.

"It is time to elect people whose record provides greater assurance of their willingness and ability to get the job done."