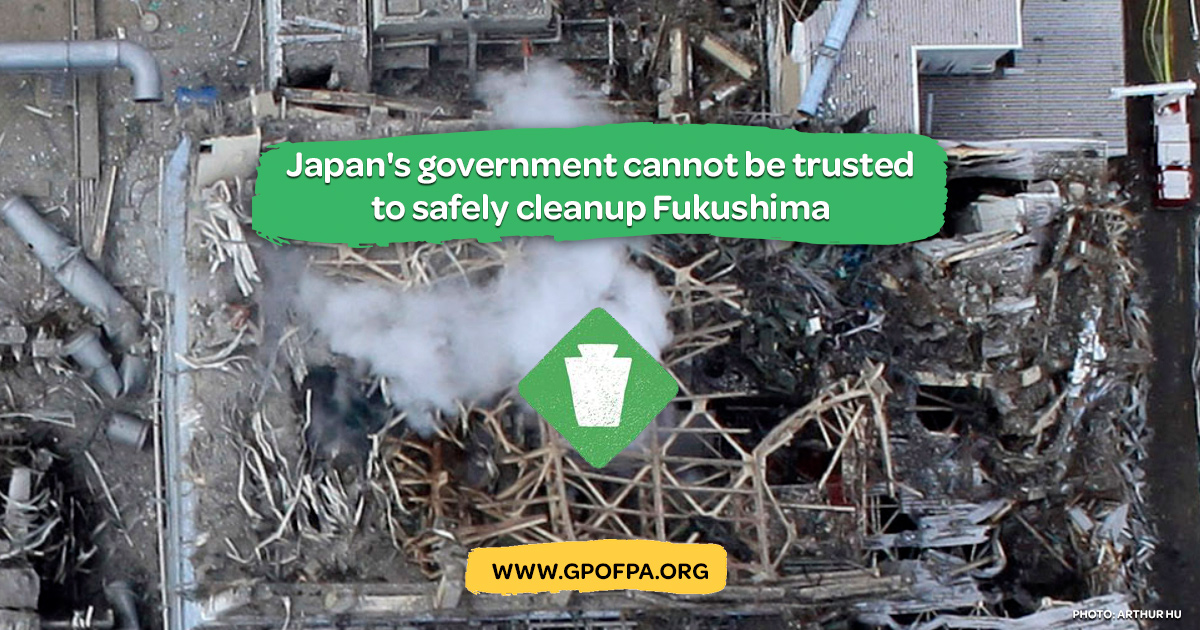 In December 2018, the Green Party of Pennsylvania (GPPA) and Green Party of the United States (GPUS) requested the United Nations to take over the crippled nuclear reactors at the Fukushima Daiichi Nuclear Power Station (Fuku) in Japan. Acting in response to a request by Pennsylvania Greens, the National Committee of GPUS has requested the UN Economic and Social Council to direct the International Atomic Energy Agency (IAEA) to take over the Japanese nuclear reactors.

Involvement by the GPPA was initiated by Tom Bailey, a Green Party member from Westmoreland County. Bailey had been a student at Elizabethtown College in 1979 and was evacuated from campus during the meltdown of the nearby nuclear reactor at Three Mile Island. Since then, Bailey, now a father of three, has been concerned about the effects of the accidental release of radiation on future generations and sees the Fukushima accident and continued contamination as a serious threat. "The Japanese government has dumped one hundred tons of fresh water into each reactor daily," explained Bailey. "These tons of water sink through the former Fuku reactors' floors, join the ground water below and seep into the Pacific Ocean only yards away. Dumping radioactive waste into the ocean is illegal, and its effect on the global food chain will be devastating to all life on Earth for generations."

Therefore, GPPA has requested that the UN take action, including a new UN General Assembly resolution which would authorize the IAEA to "physically occupy nuclear facilities" when the situation there is "out of control."

Sheri Miller, chair of GPPA, agrees with the letter's emphasis on this generation's accountability. It says, "The adults alive today must take responsibility to care for radioactive materials for what could be thousands of years. Because our generation consumed the electricity, our generation must be responsible for what we benefited from. We [should not] selfishly burden future generations."

At the time of the Fuku disaster in 2011, the GPPA Steering Committee called for the closing and decommissioning of PA's five nuclear power plants, which contain nine operating nuclear reactors. Then GPPA Chair Ian K. Samways from Allegheny County explained, "The Fukushima nuclear power plant catastrophe in Japan is a wakeup call that this energy source is neither safe nor sustainable. The entire nuclear-power life cycle is fraught with inherent risk, which is multiplied by the possibility of human error."

Neal Gale, the GPPA 2018 candidate for U.S. Senate, said recently, "During the six decades that nuclear reactors have been used to generate electric power -- the first coming on-line in Shippingport, PA, in 1957 -- proponents have claimed safe and efficient operations providing inexpensive power for unlimited economic growth. The truth is something else!"

Gale then checked off the many ills of nuclear power, "multiple system breakdowns in plants around the world leading to regional contamination zones; costs per kWh surpassing other generation fuel sources; tons of waste plutonium, unable to be safely stored, with a toxic half-life of 36 thousand years; disregard for the health of (often indigenous) workers who mine the radioactive ore for use in the plants; and the inevitable link between the 'waste' product of the reactors – plutonium – and the use of that plutonium in the manufacture of nuclear armaments. We can no longer accept the multiple risks presented by this economically centralized, environmentally hazardous and technically unresolved energy source. Each nuclear plant represents not only an accident of potentially horrendous consequences waiting to happen, but a continuation of an energy strategy designed to maximize the profits of the financial elite at the expense of the rest of us. We have better, renewable choices!"

The GPPA and the GPUS have also written to the International Olympic Committee (IOC). Charging that Japan is violating the Olympic Mission, the Green Party has requested the IOC perform an inquiry to protect the residents of Japan, possible 2020 Summer Olympians and the Pacific Ocean from unnecessary nuclear radiation. The United Nations Human Rights Council had ordered a reduced level of radiation exposure must be achieved on behalf of the residents of Japan. The Green Party requested that these radiation reduction levels must be achieved before the 2020 Summer Olympic Games are opened.

"Open Letter to the United Nations" from Green Party of the U.S. and Green Party of PA, GPUS National Committee Resolution #940, December 2, 2018, http://www.gp.org/fukushima_daiichi;