Green Party of Tampa will march against Monsanto 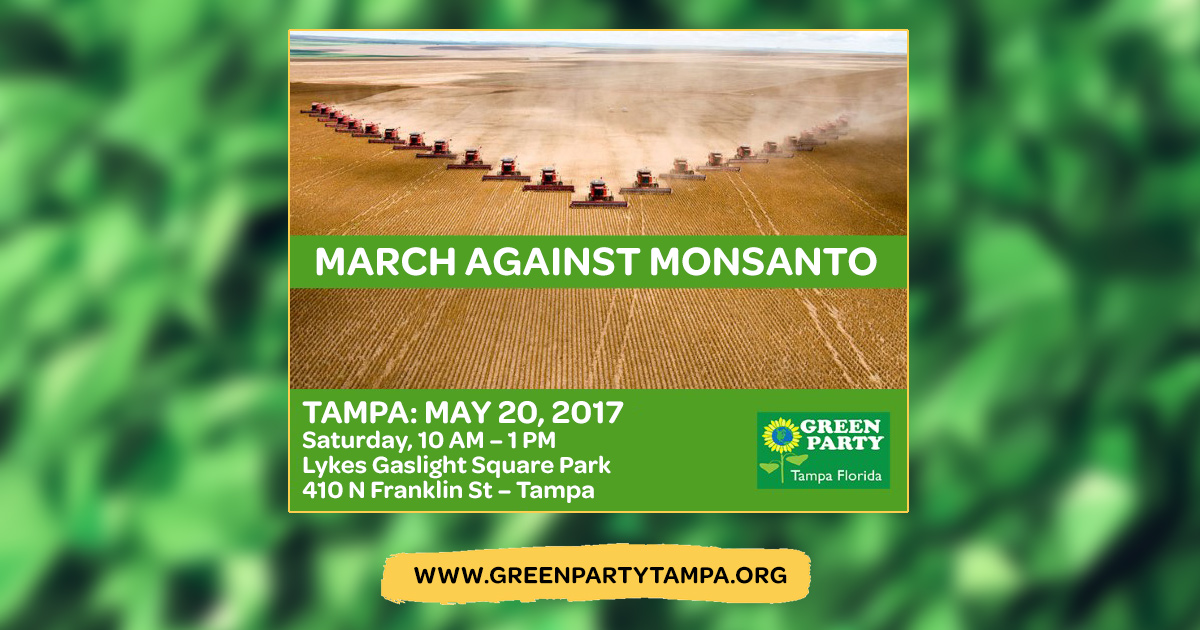 Do you wonder sometimes if you eat a paprika or strawberry because it taste the same. You buy a tomato plant and cannot grow a new plant from its seeds. Most likely it is a modified organism from Monsanto or Bayer who want you and farmers to buy every year new seeds from them.

This is a crime on nature. Bring them to court

Hundreds of thousands of people are expected to join a worldwide protest on May 20, against the multinational biotech and agribusiness corporation Monsanto with rallies to be held in as many as 46 countries in various parts of the world.

The grassroots mobilization and mass protest against the Trump junta have reached an all-time high. Yet our growing Anti-Trump resistance is still rather weak in terms of explaining exactly what it is we are fighting for. We have to show our name.

Are we talking about a return to Establishment Democratic Party rule, a slight revision of the status quo we experienced during the Obama and Clinton administrations? Or are we talking about a genuine grassroots "Political Revolution" as called for by Jill Stein from the Green Party.

It's time to work together with all Green Party members on specific issues as labeling of GMO food or banning plastic bags. Show the strength of our nation wide Green Party in unity behind workable issues.

On Tuesday, April 18, representatives of the Organic Consumers Association and our Regeneration International project gathered in The Hague, Netherlands, along with members of other civil society groups, scientists and journalists, to hear the opinions of the five judges who presided over the International Monsanto Tribunal.

The upshot of the judges' opinion? Monsanto has engaged in practices that have violated the basic human right to a healthy environment, the right to food, the right to health, and the right of scientists to freely conduct indispensable research.

The timing couldn't have been better for the Monsanto Tribunal to announce its opinions. But is time running out for us to hold Monsanto accountable—and replace its failed, degenerative model with a food and farming system that regenerates soil, health and local economies?