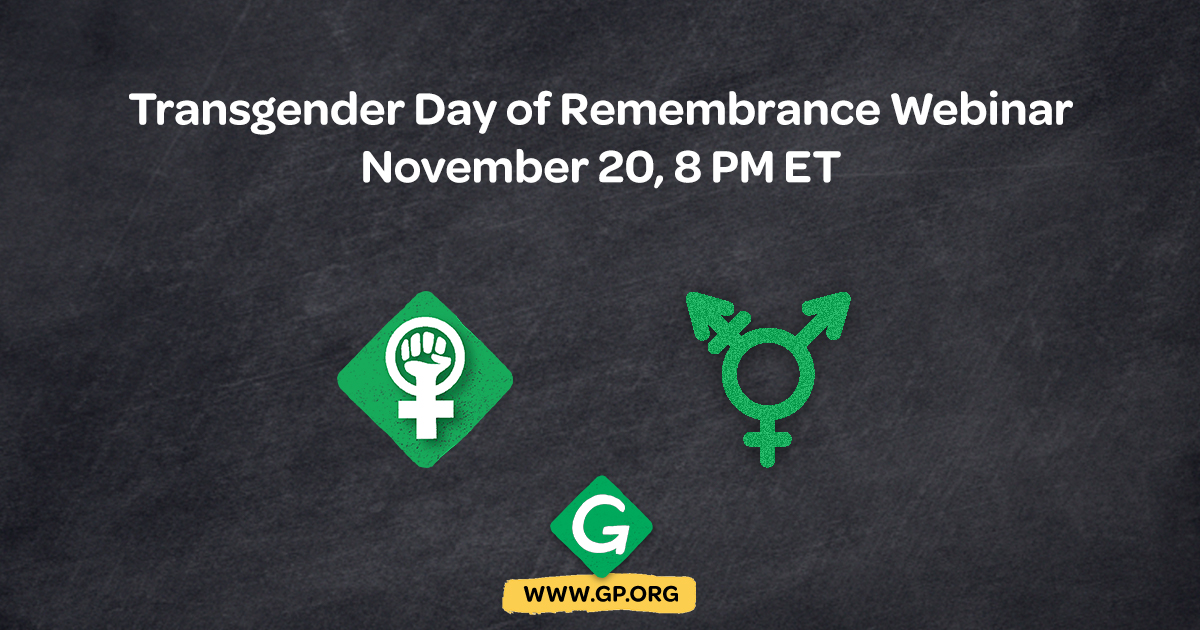 You must register in advance for this webinar:
https://zoom.us/meeting/register/tJEsde-urDMvH9Vc7ST7j36hn0rAyUU1Pv-w

After registering, you will receive a confirmation email containing information about joining the webinar and can submit questions for the Q&A at the end of the webinar.

Veronika Fimbres is a Green Party member from California. She ran for the Green Party nomination for Governor of California in 2018.  She is a Vietnam veteran who served as San Francisco Commissioner of Veterans' Affairs more than fourteen years under three mayoral administrations where she was the first transgender commissioner. She has also worked as a registered nurse. She is a long-time advocate for the rights of transgender people.

Avery Seal is a 19 year old trans woman from New Jersey and a member of the YES Caucus. She is also a member of her college’s LGBT+ Student Union where they work on outreach, education and representation within their school, and she has also been involved in Black Lives Matter protests. She joined the Green Party because she aligns strongly with the Green Party’s key values, and feels that it is the best party for social justice and equality, and that it represents and respects the LGBT community and other marginalized communities more than any other party.

Cynthya BrianKate is a transgender woman and intersex chimera (biologically between male and female, product of siblings merged in utero) who has been an educator, advocate and activist on gender and sexuality diversity for over 20 years.  A Green for over a decade, she has served and continues to serve as a Vice-Chair of Green Party of Suffolk County (GPos) on Long Island (NY) and has helped them become a leading example when it comes to feminism and upholding gender diversity. She is also a member of the Green Party's National Women’s Caucus (NWC), Lavender LGBTQIA+ Caucus and forming Disability Caucus.  Cynthya helped found the Long Island Transgender Day Of Remembrance (TDOR) observance and has spoken both there and at about a thousand other panels, lectures, rallies, protests and other events.  Most recently she has spoken at the United Nations-sponsored Women Included project and the 2020 Green Party ANM (Annual National Meeting).