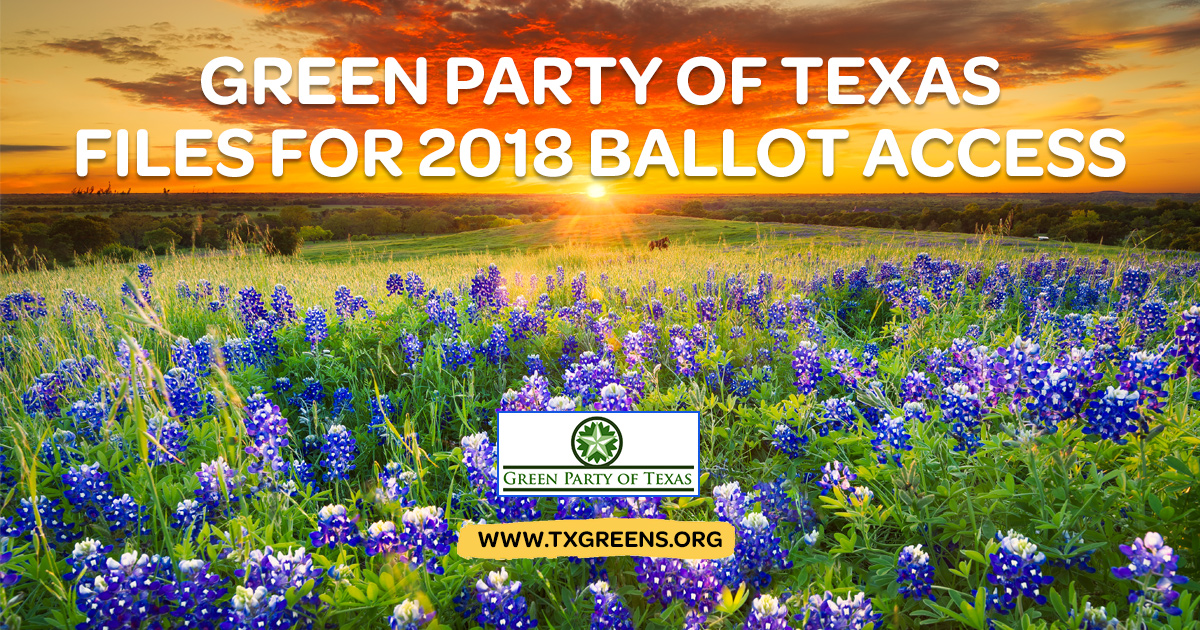 The Green Party of Texas (GPTX) has filed party registration with the Texas Secretary of State’s office, declaring GPTX intent to nominate candidates to the November 2018 general election ballot.

GPTX lost ballot access in 2016 when it’s leading statewide candidate, Martina Salinas for Railroad Commissioner, finished with 3.26%, receiving 285,558 votes. Despite this and other strong finishes across the state, GPTX failed to meet the 5% threshold in a statewide race necessary to retain ballot access. In order to again qualify, GPTX will have to collect 47,183 verified voter signatures, in person, from voters who have not participated in any other party’s primary or convention, within a 75-day period beginning March 14th.

Texas has some of the toughest ballot access requirements in the nation, and because of the uncertainty that this administrative burden creates for an all-volunteer party with almost no funding, GPTX has encouraged individuals seeking district and local offices to file as independents so that they may be subject to much lower petition signature requirements.

Nonetheless, GPTX remains committed to developing the party and promoting a Green vision for the future within the electoral arena. Candidate applicants for the 2018 GPTX nominating conventions are: Jan Richards for Governor, Jamar Osborne for Attorney General, George Reiter for Railroad Commissioner, and James Partsch-Galvan for US Congressional District 29. GPTX nomination of these applicants will be determined by the party nominating conventions, beginning with the precinct conventions on March 13th. GPTX may endorse independent candidates after the ballot access period is closed.

Voters who wish to support GPTX return to the ballot should refrain from voting in a major party primary so that they may be eligible to participate in the GPTX conventions and/or sign the GPTX ballot access petition. Individuals wishing to assist in this effort should visit txgreens.org for more information.