Thank you for supporting our campaign 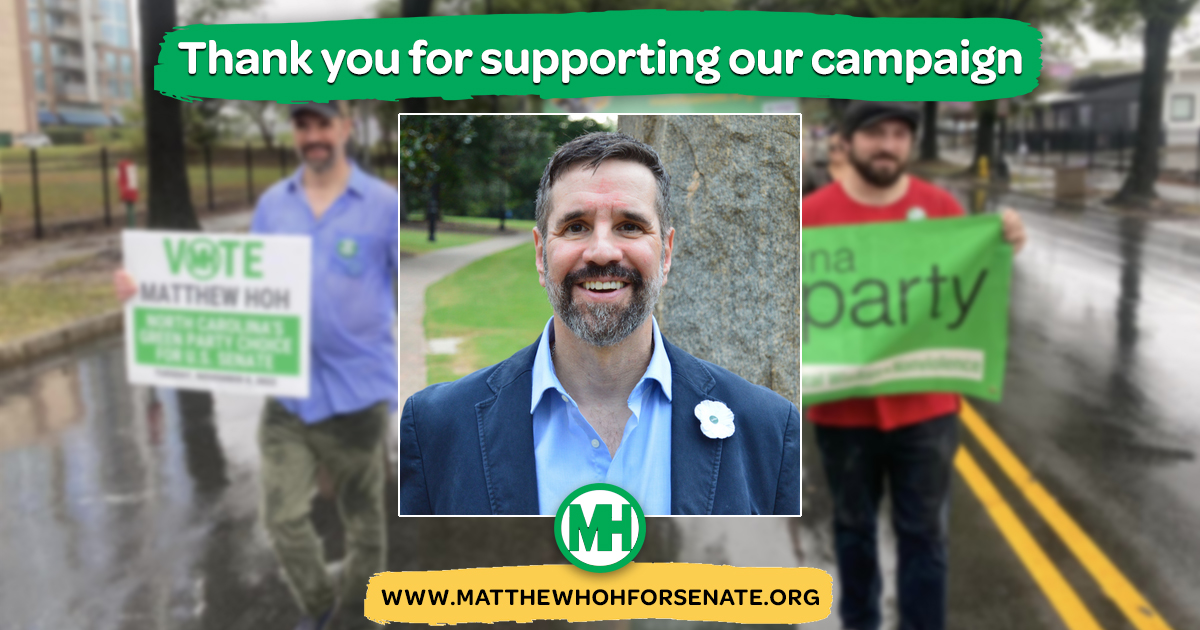 Thank you for supporting our campaign.

In an election where we had to fight some of the most powerful political elites in the country just to get on the ballot, every single vote we earned I consider a win. We were only able to do that because of your support. I hope the sincerity of my gratitude comes across through this message.tncg

Alongside the North Carolina Green Party our campaign successfully conducted a historic statewide ballot drive. We then were confronted with an organized effort from the highest levels of the Democratic Party and the Democratic-controlled State Board of Elections to keep us off the ballot. We fought back in the courts and the media, because our supporters resourced and enabled us to do so, and we won. We kept our spot on the ballot.

Our success in the election stems from the fact that despite the full weight and power of the executive branch of North Carolina's government and the Democratic Senatorial Campaign Committee, we got on the ballot and gave voice to working families across North Carolina who otherwise would have been taken for granted and ignored by the two corporate parties of War and Wall Street.

Every one of those votes that we earned - again, because of you - builds for the future. One of the most important goals we had for this campaign was to build upon the work done by the North Carolina Green Party and bring more people into our movement. We clearly met that goal. I don't view this year's election as the end, but rather an open-ended process of building upon what was before and enabling what will come next.

Not only did we represent tens of thousands of North Carolinians who otherwise would not have been represented on the ballot, we introduced many more to the idea of political independence from the two-party system. People across North Carolina are now confident that representation at the voting booth is possible for those not underwritten by corporations, the banks and the wealthy.

In its essence, this campaign has been about building a foundation for real democracy, and we’ll continue to do that together with the many wonderful people we’ve connected with this year. I am humbled by your support and I trust we will continue to work together to reclaim, reimagine and rebuild our political system and our society into what we know it can be.

This was a team effort that included all of our supporters, our staff, our volunteers, the North Carolina Green Party and Green Party US. None of our victories would have been possible without that team effort. We will continue that to make sure we achieve more victories for people, planet, and peace in the years to come. I trust you will be with us.

With the greatest respect and gratitude,