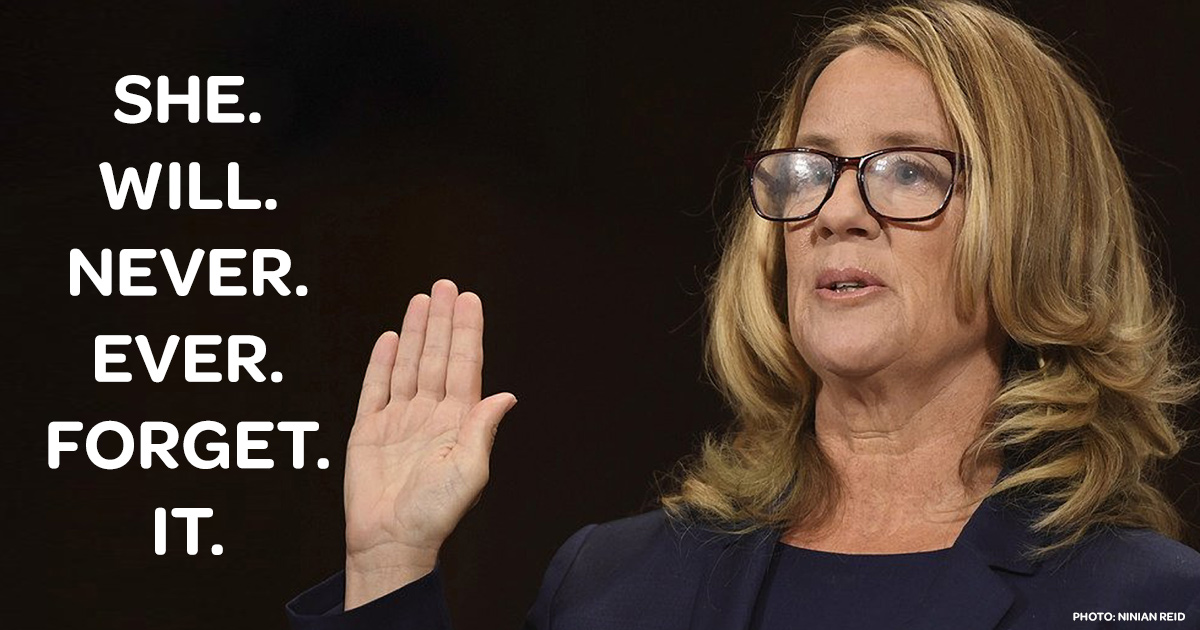 The National Women's Caucus of the Green Party of the United States thanks Professor Christine Blasey Ford for coming forward to offer her testimony about the wisdom of not choosing Judge Brett Kavanaugh to fill a vacancy on the US Supreme Court. This testimony has not only demonstrated indelibly why Judge Kavanaugh should not be confirmed to this position, it clarifies for the nation the societal issues involved, in denial of harm and of victim shaming, that should inform any future candidate for the bench, or for any positions of power and judgment.

The question that loomed was of credibility. Why should we believe her? Why should we believe him? Do we even have to believe him if we can marginalize her? Where does due process end and entitlement begin? Briefly, what the men on the judiciary panel asked for was a chance to let a statute of limitations concept move from immunity against criminal prosecution to also include any future consequence, including rerouted career ambitions. In this instance, granting the accused a free ride to a lifetime position of extraordinary power, including overseeing from the bench, both criminal and civil cases that would involve these very issues. Even if we believe her, they posited, can we let her stop him, stop us? The NWC lays out this underlying assumption of male immunity, beyond the court system, and into every other aspect of life, because the judiciary committee apparently doesn't even see it, to get it. Under their assumption a woman could be raped on the steps to the White House, and, failing a successful prosecution, could subsequently have the monster sitting in front of her, asking to be hired as a guard of those steps, and be compelled to hire him.

So our first task is to publicly take note of that underlying assumption, and call it out. A statute of limitations is intended only to encourage early reporting and successful prosecution -- not to give a lifetime entry pass to the chambers of power.

The second is to note how situationally deaf many committee members have made themselves to the validity of mathematics. When they ask why any balance, in weighing credibility, should tip to the accuser, instead of the accused, they ignore clear response by criminal investigation agencies who have found that fewer than 3% of accusers are later found to have lied. These Senators can cite instances of such lies because such lying is so rare, so uncharacteristic of what happens, that it is headline worthy. They can rattle off 3 instances of lying, in the past decade, but would struggle to name as many instance where the the accuser was clearly vindicated. They are claiming, in doing so, that the obvious must be doubtful, or else we would have it be headline news. Instead, the obvious has simply become invisible to them, and part of the premises on which they act.

Because they don't have to see otherwise. When we don't like what statistics tell us, we sometimes have personal, anecdotal evidence to refer to, to break through to the truth. But, as males, these Committee members have seldom been victims/accusers, to give them that insight.

Our second task, then, is to point out that these men, whose usual choice is to disbelieve an accused, are now doing so in the face of their own rhetoric, practice, trusted sources and simple arithmetic. They suddenly want to trust anecdote, and personal likeability, and gut reaction, instead. This inconsistency, in a matter where women are overwhelmingly the accuser and males the accused, is difficult to explain by any name but misogyny. But they are not even trying to give it another explanation. It is the committee here that is on trial, and we are waiting for them to offer any decent defense against such an explanation.

The road the committee has left open to us, for understanding how or why we should disbelieve Professor Blasey Ford, and all such accusers, is to treat this as an anecdotal instance, one off, where this woman is one of the 3% who have lied, and you can tell that just by looking her in the face and listening to your gut. Okay, given that there apparently is a 3%, does the Professor fall into that category? Let's look at her story. She was 15, it was a long time ago, so what does she remember, and why does she remember some particular things, and not others?

She recalls what she was wearing while it happened. So let's look at that. She recalls that she had a one piece swim suit on under her outer clothing. Why, of all the details, would that stand out? Yeah, they had been swimming on some days that season, but what are the odds that this was such a day? Indeed, decades later, why would you even recall that you had been swimming that week, let alone that day? Does anyone else at that party, including the accused, recall what he/she wore? Would it make them more credible to recall it? Probably not -- it would seem like they were inventing details. And why the swimsuit, and that is was one piece? Wouldn't recalling the color of her blouse be as easily imprinted on her mind?

Any survivor of sexual assault will instantly recall what protected them or didn't. A pair of underwear that tore on the side as he yanked it down. A thick jacket that got in the way of his hand for a minute. The cheap metal necklace cross that poked your throat and his hand as he strangled you during a thrust. These things are not dredged from fashion memory, they come back vividly because for one instant they gave a hope against drowning, that he would fail, that he would pull away, that he would realize what he was doing and stop, that the nightmare would not be reality, but only be the worst nightmare imaginable. That you would not trust yourself ever again about this being real, if only God will intervene and make it not real. She remembers the one piece swim suit because, in his drunken state, he could not get it off of her. That swimsuit prevented her from being a rape victim, and She. Will. Never. Ever. Forget. It.

It is exactly what a victim of attempted assault would remember. How can that not be obvious and visible to anyone who thinks about what they are hearing, and really does want to hear the truth? Again, this committee indicts itself, to let a preconceived pseudo-reality supplant what is before them, even on this, the lamest of tests, anecdotal evidence.

Yes, it happened, he's guilty, the only real question left is why we don't want to believe it? The National Women's Committee of the Green Party of the United States demands that this issue must be faced, as well, if we are to avoid choosing wrongly for the successor nominee. Men do not want to believe it [nor, for that matter, women] because it paints such a frightening picture of who we are as a society. We have heard comments about "Who would be left standing?" if a drunken youthful incident of attempted rape were to be held against any male. Rape is so unthinkable to some that they want to believe that it is rare. It is so thinkable to others that they believe everyone, if they can, does it. It is so without consequence, for the accused, that they cannot conceive that the accuser was actually harmed. Especially if all you were doing was "kidding around," and didn't even get the swimsuit off, and were drunk, and were 17, and laughed about it with your male companion, the one who watched the door so you wouldn't be walked in on. Even the victim could see that you would only have killed her "unintentionally," so must now also see that rape wasn't intended either. Because you were only joking, right?

Or there is the new mantra -- that this only happened because of outdated, confusing sexual mores, and it would not happen in today's hook-up culture. Which is to say, what? That men don't get drunk anymore, close the door, push you onto a bed, cover your mouth when you object/scream. That their buddies don't guard that door for them? That a rough-housed fifteen-year-old wouldn't scream unless she was being a drama queen, since a simple "no" would suffice?

Or the "ruin-his-life" response. Does anyone out there believe that our society has now changed in such a way that today's 15 year old accuser would not be instructed to calm down, rather than "ruin his [young] life"? At what point is he old enough that she is allowed to "ruin" it? And, if the act of reporting is where the ruin begins, then what about the male whom we saw testify on the same day as Ms Blasey Ford. He was in tears, angry, outraged, pathetic, pushing the side of his mouth with his tongue as he sought self control, and in total denial. If he had Come to Jesus decades ago, confessing himself -- not waiting, closeted, for an accusation -- about what he almost did, and, as significantly, what he did. Then he would have had time to turn his life around, to see women as real human beings, and to see fear and hurt and harm for what they are. But our society abandoned him too, not teaching him to take responsibility, or even believe that there was responsibility to take.

For the rather petty and personal matter of what happens next to Mr Kavanaugh's career, it does need to be sidetracked. So that he can get the help he needs, now, before he does more harm -- not just in whether he attacks 15 years olds at drinking parties, but in how the law he rules on affects their lives, and the lives of their 17 year old attackers. Yeah, his life is ruined, if by that we mean his career ladder will be missing a rung. It is already ruined if we mean being a human being who takes responsibility when someone is deeply harmed by his actions.