A message of thanks from the Ohio Green Party 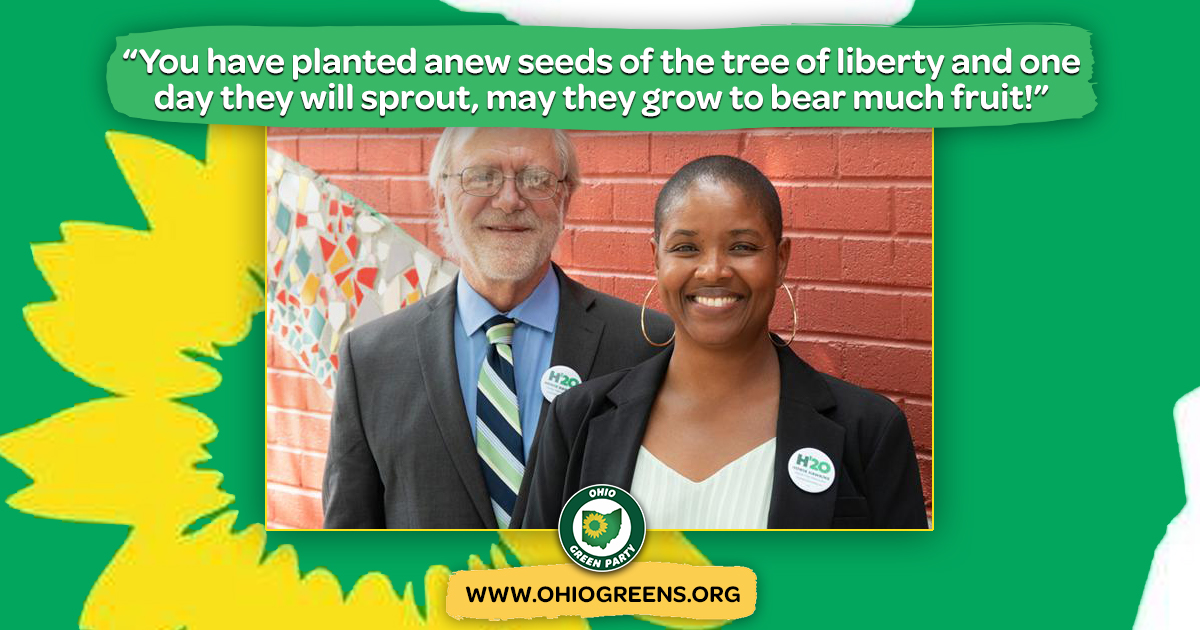 To Howie Hawkins, Angela Walker, and the H’20 Team:

On behalf of the Ohio Green Party we wanted to thank you for running for President on the Green Party ticket in 2020. Though very few understand it today, what you did was extremely important.

Even among those of us who did not have you as their first choice on the Green Party ballot, and even those of us who disagreed with some of your policy positions and views, we all nonetheless have immense respect for the guts it took to run your campaign. 2020 of all years was an extraordinarily difficult year to run for President of the United States on a “third party” ticket. As such your participation deserves special veneration.

The ruthless pragmatism of lesser-evilism this year was so pernicious and internalized by so many, even by those principally opposed to it, that very few understood the importance of running a serious opposition candidate under stakes as high as these. Far from recognizing the utmost need for such a campaign under such circumstances, opposition to it by well-meaning, albeit misguided activists had seemingly never been higher. It was virtually impossible not to have been in some way demoralized, frustrated, or intimidated during such a race. In spite of these challenges, and following the example your campaign set, we stuck with you to the end. And in this we have no regrets, our conscience is clear.

We all know in future races it will take much more than ballot access to win the hearts and minds of the nation, but merely being on the ballot demonstrated before the law and before all who heard your message that the duopoly and the nation are not the same. It elucidated before the people that something is fundamentally wrong with our democracy when only two candidates and two parties are taken seriously— when more than two serious candidates with grassroots support were running, when third party and independent candidates weren't even allowed to plead their case to the American people in the debates. This is important and this shows even to the most ignorant voter that there is a problem with how the system works. This knowledge precedes the possibility of any meaningful change.

It is also worth mentioning that for us, your campaign helped strengthen the fraternal bonds between Greens and Libertarians. The issues we faced were the same issues the Libertarians faced, and standing with one another, friendships and alliances were formed to our mutual benefit. You inspired movements and campaigns which take direct aim at the material conditions that justify and uphold the pillars of the two-party system. In time those pillars will fall. The frustration borne of campaigning for H’20, or Jorgensen, or any other third party or independent candidate, is precisely the kind of frustration needed to change the system. That frustration can be channeled into local and state parties, into grassroots organizations and movements. And if one thing is sure, it’s that the soil is fertile for change. The Hawkins-Walker campaign has played no small part in making it so and seeds have been planted.

The genuinely progressive policies and aspirations of the Hawkins-Walker campaign helped to slow the dangerous shift of the overton window in this country towards the far-right. Indeed it helped move that window of acceptable political discourse to the left, and good progressive policies once laughed at are now being taken seriously. At a time when far-right conservatives were dangerously calling the center-right Biden-Harris campaign a radical socialist plot, your platform— a genuinely democratic, ecosocialist platform, demonstrated the absolute absurdity of such views. You helped open the doorway to genuinely progressive, left-wing ideas being taken seriously in this country at a time when such a thing is desperately needed.

Your campaign was the only one which took the warnings and recommendations of the world’s top scientists at the United Nations’s Intergovernmental Panel on Climate Change seriously. It was the only campaign whose policies were fully in-line with reason and the accepted scientific consensus. History will rightfully condemn the weak and destructive policy positions of Trump and Biden administrations on this and many other issues, and in the same breath it will say that you were right and the people of our time should have listened to you. In the short term, being right and losing is more important than being wrong and winning.

In generations to come surely those involved with this campaign campaign will be remembered as having been among those principled individuals which every generation honors. History will no doubt see you as having been far ahead of your time, fighting for what was right at a time when few of your contemporaries understood the importance of that which you so earnestly fought for. To be in that canon with so many other great men and women, surely is a most high honor. Regardless of what happens in 2024, the Howie Hawkins and Angela Walker Campaign has secured its place in history next to such giants as Eugene V. Debs and W. E. B Du Bois. Today they may laugh at us, but tomorrow we will win.

We hope to see, in the not-too-distant future, that we will have turned the White House into the Green House. And beyond this indeed we will go further in saying that through our efforts the day will come in the not too distant future when humankind will hurl off the shackles of war, poverty, tyranny, oppression and exploitation it has known since time immemorial, and, proclaiming the universal brotherhood of all humankind, will at last establish for itself a world truly worthy of humankind. What a marvelous day that will be indeed. You have planted anew seeds of the tree of liberty and one day they will sprout, may they grow to bear much fruit!