The Corporations Behind Hoyer 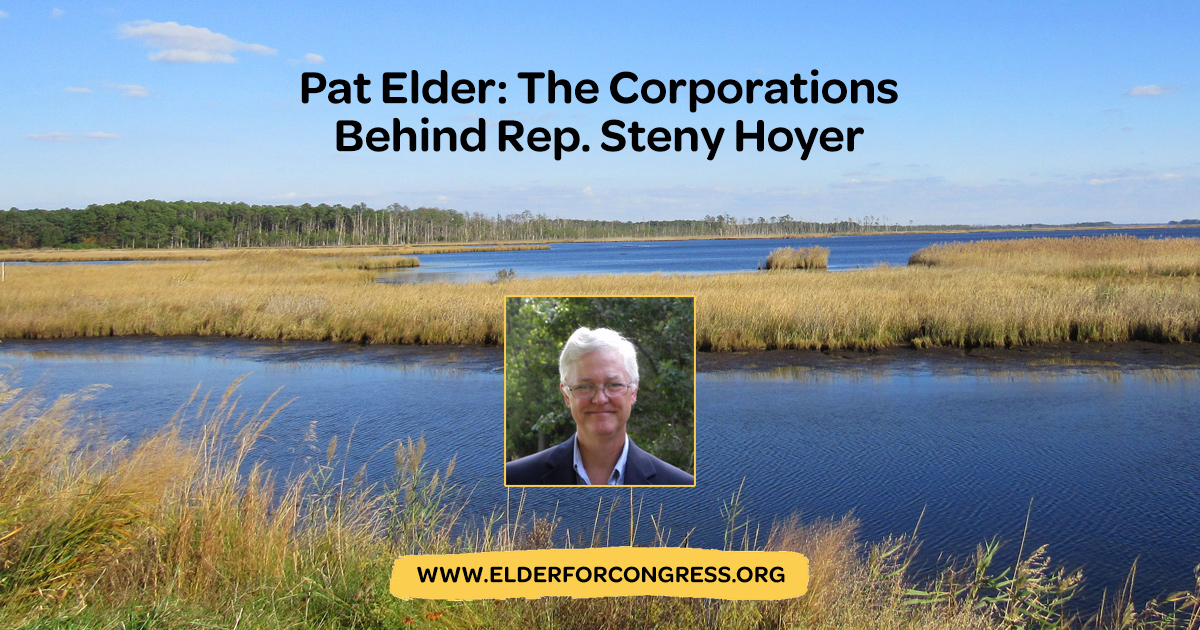 Quid pro Quo - Something for Something

So far during this election cycle Steny Hoyer’s campaign committee has raised $3.1 million and his Political Action Committee has raised $2.9 million. Of course, Rep. Hoyer doesn’t have to spend this money to get elected. He typically receives two out of every three votes cast. Instead, he’ll sprinkle the money throughout the party to candidates who are eager to serve the corporations mentioned below.

Let’s examine who is giving the Democratic Whip this money and understand why they’re contributing. Steny receives just 1% of his campaign cash from small donations of less the $200. Hoyer’s campaign demonstrates the antithesis of grassroots organizing.

John Gardner, the founder of Common Cause, told me in 1972 that you’ve got to follow the money to understand why politicians vote the way they do. Here’s a rundown of Hoyer’s biggest contributors.

Blue Cross/Blue Shield, UnitedHealth Group, Medstar Health, and AFLAC regularly give Hoyer tens of thousands of dollars because they want to make sure Hoyer and the Democrats don’t embrace Medicare for all. Pharmaceutical giants Bayer AG, Eli Lilly & Co, and Humana also shower Hoyer with cash. They don’t want to see federal limits on prescription costs.

NORPAC is a pro-Israeli lobby that makes sure Rep. Hoyer continues to vote in favor of lethal aid to the Zionist regime. The money prompts Hoyer to praise Israeli forces even after they massacre unarmed civilians.

Northrup Grumman, Boeing, General Dynamics, Honeywell, and Lockheed Martin all pony up. They want to make sure there are sufficient wars or threats of war for Congress to justify sending them hundreds of billions in weapons contracts. Hoyer does a good job in this regard.

Hoyer is a cheerleader for burning fossil fuels to produce electricity. He hasn’t gotten the memo on climate change. His district will soon have six separate fossil fuel electrical generating facilities, all within a few miles of Brandywine, a predominantly African American community in Prince Georges County. When the last project is fully completed, the area will represent the greatest concentration of fossil fuel plants anywhere in the country.

Rep. Hoyer is also a huge friend of nuclear energy. Exelon Corp, the owner of Calvert Cliffs, gives Hoyer $10,000 every election cycle. Entergy, PG & E, and Southern Co. which own many of the nation’s nuclear power plants, also fund Hoyer.

Although European nations like Germany have done away with college tuition, Rep. Hoyer takes a ton of money from Citigroup and Bank of America, the biggest players in the student loan market. They’re making incredible profits and they want to keep it that way.

This is no cheap shot. Instead, it is a snapshot of the American political process. We must take the money out of the political equation and institute public financing of campaigns, something my opponent is against. With public financing of campaigns, politicians would be looking out for you and me, rather than their corporate backers. Imagine that!