The Green in a Runoff for Congress Against Barbara Lee: Q&A with Laura Wells 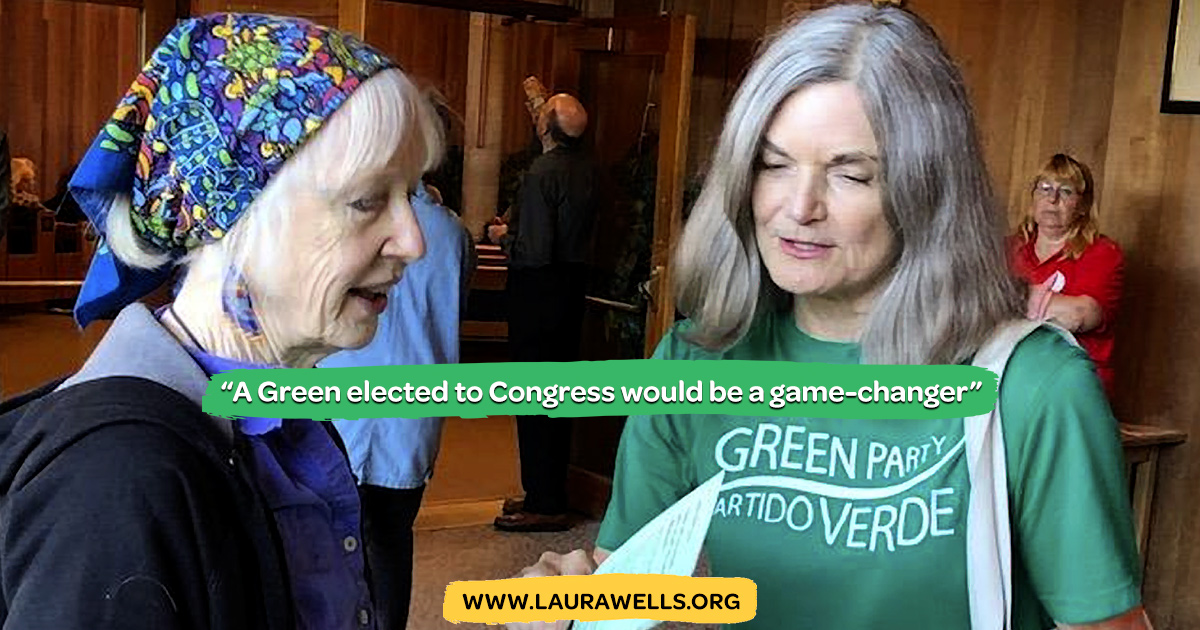 For the first time in the history of California's 13th Congressional District, a General Election will feature a runoff between a Green, Laura Wells, and a Democrat, Incumbent Barbara Lee. Voters in the district, which includes the cities of Oakland, Berkeley and Alameda, which may be the most politically left-wing in the country, will have two progressive women candidates to choose from. Despite its historic nature, the election has drawn scant attention from the corporate media.

Congresswoman Barbara Lee has served with distinction for twenty years. She cast the lone vote in Congress against the war in Afghanistan, a war which seventeen years later has yet to end. Lee's tenure in office continues the legacy of the late Ronald V. Dellums, and that of Black progressive local leadership within the Democratic Party. By virtue of her seniority in Congress, if re-elected, Lee may vie for a leadership role among House Democrats. However, the leadership of the House Democrats has very rarely supported Lee's progressive legislation and it has almost always stalled in committee hearings, never coming up for a floor vote, even when the Democrats controlled the Committee chairs in the House.

Laura Wells is a veteran leader of the California Green Party. Wells has run for State Controller several times, and in 2014 received 5.7 percent of the vote. In 2010, Wells was the Green Party candidate for Governor of California when she was arrested at a Gubernatorial debate, which she and all third party candidates were excluded from, for merely attempting to enter the building to watch it.

Wells managed to make it into the General Election, because she noticed that, after the filing deadline, no candidates had filed to run against Lee. Wells organized an official write-in campaign, and by virtue of receiving the second most votes in the June primary, she is in the runoff. Wells decided to enter the race to present her platform, even though she agrees that Lee is perhaps the most progressive member of the House of Representatives. She has generally refrained from campaigning negatively against Lee.

Lee, who generally cruises to victory in the district with minimal campaigning, agreed to share the stage with Wells at candidate forum sponsored the League of Women Voters held at Oakland City Hall on October 5, 2018. A video of the forum is available online.

Wells agreed to a special Q&A for IndyBay.org (in the interest of full disclosure, Wells is a friend of mine):

Question: What are the policy proposals at the top of your agenda?

Implement improved and expanded Medicare for all, and tuition-free universities and trade schools. Pay for them by taxing the rich the way they used to be taxed, and stopping the wars.

Lay the foundation for establishing public banks at all levels. The Wall Street banks should have been replaced by a public banking system rather than bailed out, weakly regulated, and not prosecuted. Having an economy that is under our control enables us, for example, to divest from fossil fuels and invest in renewables.

Stop the billions of dollars in defense aid to Israel. The Israeli government and military have not lived up to agreements reached through diplomacy, and recently the Israeli parliament passed a law essentially defining Israel as a Jewish state, not even pretending not to be an apartheid state.

Upgrade our democracy so we are not stuck with the failed two-party system. Co-sponsor and push hard for the Ranked Choice Voting legislation recently introduced in the House of Representatives. It would implement a form of proportional representation, which is a multi-party electoral system used by more than 90 countries in the world. Abolish the Electoral College; without it neither Trump in 2016 nor Bush in 2000 would have taken the presidency. Overturn Citizens United - any candidate can make the decision to refuse corporate campaign contributions, a decision all Green candidates make; Overturn the Top Two primary in California, so voters don’t just choose between two highly-funded candidates in November.

Q: Your candidacy has been a long shot from the beginning. Short of winning, what were your goals in entering this race and how well do you feel you've done in accomplishing them?

We achieved our first goal, which was to ensure that voters had a choice in November 2018 rather than an unopposed incumbent candidate as in the June primary. We won the write-in vote with three times the vote count of the other four official candidates combined: Republican, Libertarian, No Party Preference, and American Independent Party.

Our goal for the November election is to pressure Congress as strongly as possible. We have three Green candidates in California running one-on-one against incumbent Democrats with no Republican in the races. We are advocating strongly that voters raise their expectations and use their votes to pressure for the very basics, such as healthcare, housing, justice, education, and a better environment. A Green elected to Congress during these crisis times would be a game-changer.

Q: One of your objectives is to increase awareness about and support for the Green Party and what it stands for. What is your vision of the future of the Green Party?

The Green Party has what is desperately needed in government now: it is corporate-free, which ensures its solid commitment to the interconnected values that Americans want: peace, justice, ecology, and true democracy. Of course as an organization we have struggles and make mistakes, but to blame the Green Party for its weakness is like blaming poor people for their poverty. It is the system that throws up obstacles.

Q: The Green Party wants to be the electoral expression of the social movements. This district (including Oakland, Berkeley, Alameda) is loaded with activists. A number are registered as Green, but not very many do their activism through the Green Party. How do think that could change?

More and more people are seeing the Democratic Party as the place social movements go to die. Since Bernie Sanders was shoved aside in 2016, the Green Party gained some incredible new organizers — millennials as well as long-time activists — who did a DemExit followed by a GreenEnter. As in the model of the Richmond Progressive Alliance in Richmond, California, the Green Party would not absorb the social movements, but it would be the electoral arm and coalition partner of the movements.

Q: A number of progressives and activists think it's a mistake to run against a progressive Democrat such as Barbara Lee. Some have even expressed offense at your candidacy. What would you like to say to them?

I recommend – either while filling out the absentee ballot or while in the voting booth – saying, “I like you Barbara Lee, and I am voting for Laura Wells.” The basic reason is vote to pressure, not to support the status quo. In this country we do not have the very basics, some of which we used to have, and other countries have now. That’s why we register Green and run Green, and it’s a very good reason to vote Green. We spell out the reasons why at this link: https://mailchi.mp/cb5042faf330/laura-wells-debates-matter-163359

Q: Barbara Lee presents a respected and genuinely progressive face for the Democrats locally, but her progressive legislation isn't supported by the leadership of the Democratic Party at the national level, so very little of it becomes law. Can you say something about that?

Since her courageous lone vote against war after 9/11, Congresswoman Barbara Lee has been diligent in her quest to repeal the Authorization for Use of Military Force. She has submitted bills over and over again to no avail. She has also introduced a bill to Audit the Pentagon, with only 54 co-sponsors out of more than 180 Democrats in the House.

In addition to her efforts toward peace, Barbara Lee has proposed a multi-faceted bill called the Pathways Out of Poverty act, which expands various programs related to education, housing, employment, and social welfare for the poor. Speaking of poor, that bill had the poor support of only 25 co-sponsors in 2017.

In reaction to Bernie Sanders’ remarkable run in 2016, the Democratic National Committee did not even substantially change what they “say” in their platform, and they certainly did not change what they “do.” The Democratic Party has steadily moved away from its historic base, and moved toward the corporations and the billionaire class, and so they do not support their progressive members’ efforts toward peace and opportunity.

Q: What would you like to say to disaffected voters, including radical and revolutionary leftists, who are not inclined to vote? What do you have to offer them? Why should they vote?

I would say, “I understand!” In my twenties there was time when I resolutely refused to vote. Everyone I voted for had done the exact opposite of what I thought they would do. I believed at the time that there were only two parties, and the only other option was not voting at all. A friend suggested in 1992 that I check out the brand new Green Party, and that’s when I became a political activist, inspired by the combination of being corporate-free and holding good, basic values of peace, justice, ecology, and democracy, values that were acknowledged as totally interconnected!

Now, when I see a Green or a Peace and Freedom candidate on the ballot, I have someone to vote for. Also, I do not vote in every race. The Green Voter Guide, published by the Green Party of Alameda County, has a voter card that is extremely helpful, both with local races and measures, and state propositions. You can find it at: https://acgreens.wordpress.com/voter-guides/

Q: If people could take away only one thing about your candidacy, what would you like that to be?

A difference I would love to make with this challenging campaign is for the vote counts to show that we are willing to raise our expectations and use our Green votes to pressure our government toward what we want, and need.