The Other Feinstein Deserves California’s Attention 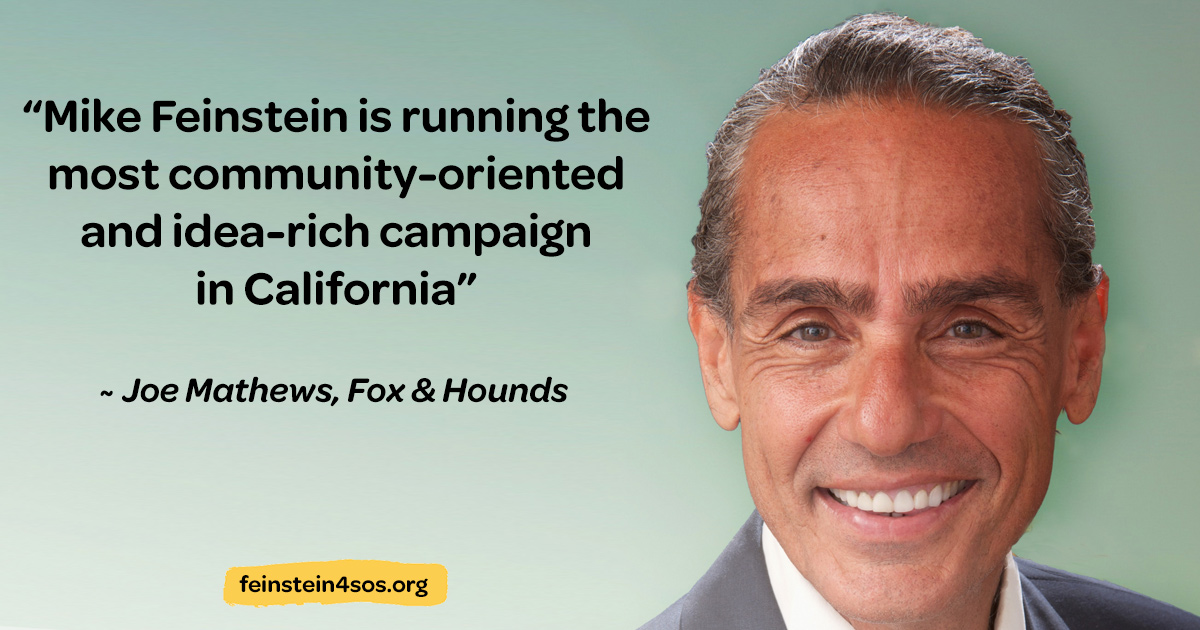 Not Dianne. Mike. He's a former Santa Monica mayor and city councilman who is running the most community-oriented and idea-rich campaign in California.

He's running for Secretary of State, so many of his ideas are fundamentally about making the state more democratic. And he is offering many such ideas – a mix of proven technologies and bold proposals. He call it a Democracy Bill of Rights.

He would get rid of the failed top two system – which ought to be a litmus test before voting for any California politician. He wants to bring ranked choice voting to a number of positions where we can choose only one person to represent us. He'd make elections day holidays so people could more easily vote.

And best of all, he wants to expand the legislature to 500 people and elect people through proportional representation. That's essential, since Californians have less representation than all other Americans. And it would give us a modern democratic system (unlike the 19th century one we labor under).

He has a host of other ideas on campaign finance and in other areas. What's great is that the ideas fit together and build on each other.

The current Secretary of State, Alex Padilla, is a brilliant person who has done a very good job as Secretary of State. But he is a mainstream politician with higher ambitions, which makes him cautious. And in the age of Trump Madness, caution ain't so bad!

Unfortunately, given the power of partisanship and the nature of the top two, Feinstein won't get out of the June election. Instead, Padilla is likely to face a Republican, Mark Meuser, who peddles conspiratorial Trumpian nonsense about non-existent fraud in California elections. Californians get enough of that on Twitter.

It'd be far better for the state if Feinstein earned a spot in the top two he can move on, and have a real debate with Padilla in the fall. He wouldn't win, but more exposure for his ideas could encourage and embolden the incumbent Secretary of State.

Feinstein is playing offense to play defense – and that's a good strategy for a California that is fighting for democracy against a would-be dictator in Washington.