The Problem with Juneteenth 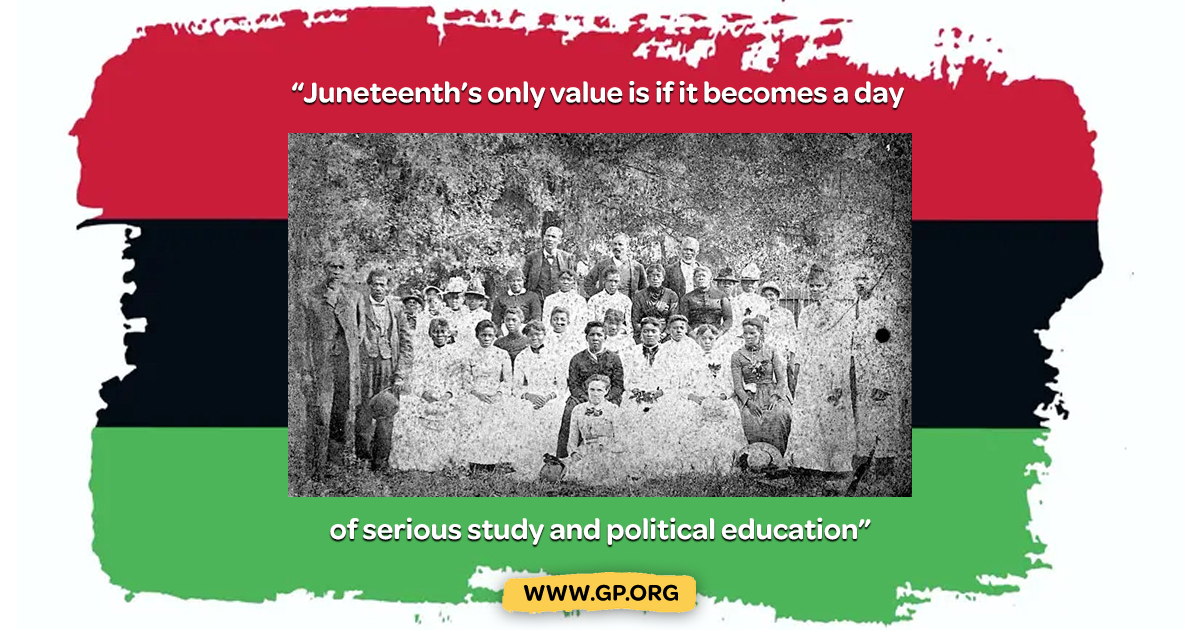 Juneteenth was a people's holiday with deep meaning for the descendants of enslaved people. But the declaration of an official federal holiday has turned it into an opportunity for corporate exploiters and cynical politicians to show pretend concern for Black people. At best Juneteenth provides a history lesson and an opportunity for much needed political education.

"The people of Texas are informed that, in accordance with a proclamation from the Executive of the United States, all slaves are free. This involves an absolute equality of personal rights and rights of property between former masters and slaves, and the connection heretofore existing between them becomes that between employer and hired labor. The freedmen are advised to remain quietly at their present homes and work for wages. They are informed that they will not be allowed to collect at military posts and that they will not be supported in idleness either there or elsewhere." General Order Number 3, June 19, 1865

The fact that members of the United States Senate voted unanimously to make Juneteenth a federal holiday proved that the commemoration is of no political value. Turning what was a peoples’ celebration into an occasion for opportunism and window dressing has actually damaged the cause of Black liberation and the understanding of history.

On June 19, 1865 Union soldiers arrived in Galveston, Texas and issued General Order Three, a declaration that slavery had ended. The fact that this event occurred two months after the Civil War ended took on an understandably mythic quality, including a belief that the news had been deliberately kept from enslaved people, or that the person carrying the message had been killed.

In reality, enslaved Texans were well aware that the war had ended. But they also knew that the absence of federal troops who could enforce the law made any legalities moot. They knew better than anyone else that the people who forced them to labor without compensation would not end their system unless they were forced to do so.

Juneteenth was widely celebrated in Texas and other southern states while the rest of the country was largely unaware of their special commemoration. Of course the day had meaning to those people descended from the enslaved in those regions and they gave the day significance in their own way. Unfortunately Juneteenth came to be more widely known and now the serious and the scoundrels alike lay claim to what should be an important occasion.

The governmental imprimatur has given way to foolishness, insult, and confused reactions. A children’s museum was condemned for serving a Juneteenth watermelon salad . The stereotypical connection of Black people with watermelon was lost on an institution committed to cultural education. Not to be outdone, Walmart sold Juneteenth ice cream which like the watermelon salad was quickly removed after protest. Then again, the business of America is business. No one should be surprised that what should be a solemn remembrance is now commodified.

But anger about ice cream and watermelon is misplaced. Corporations, avaricious banks, and cynical politicians are all claiming to be Juneteenth believers. Of course they all use Juneteenth to pretend they aren’t what they actually are, and that is a sign that Juneteenth itself is problematic.

What exactly is being celebrated on June 19? Juneteenth could be a history lesson which explained that Abraham Lincoln was not the great emancipator. Everyone should know that the Emancipation Proclamation freed enslaved people only in states like Texas which were in rebellion against the federal government, but which were safely able to continue the peculiar institution until they were forced to end it. Lincoln tied emancipation to colonization, the plan to send Black people out of the country and he actually established one such colony in Haiti.

The Civil War is rarely taught properly. The well documented struggle for liberation is left out of the story. The enslaved people who fled to Union lines whenever they were able forced Lincoln to state that ending slavery was the object of the conflict. He only reluctantly agreed to establish the United States Colored Troops, who were more invested in victory than any other group in the country. Of course, he never gave up on his dream of an all white country. Shortly before his assassination he still expressed a desire to send Black people away and to compensate the Confederacy for its lost free labor.

Instead of pointing out these well documented facts, Juneteenth is an amorphous celebration of Black people. The best it can accomplish is to point out that freedom itself is ever amorphous in this country. Enslavement was soon followed by lynch law terrorism, the sharecropping system, and the convict leasing system. Mass Black incarceration at the end of the 20th century brought about a new system of free labor, as vicious as that in the Jim Crow south.

The General Order itself shows the illusory nature of freedom for Black people. It warned the newly freed not to "collect at military posts" and not to be idle. Of course, they were forced to work hard for nothing. An allowance for temporary idleness should have been permitted, but this directive is yet another reason for serious discussion and study.

It is not surprising that Black people want validation but that desire is all too often misplaced. Validation comes when the past is remembered correctly and when real victories are achieved. It was sad to witness people who thought Juneteenth ice cream would have been acceptable if it were sold by a Black owned business. Of course liberation won’t come from Black capitalism either. Perhaps that is something to focus on instead of getting a day off from work while wishing that white people didn’t get the same consideration.

Juneteenth won unanimous approval in the Senate and only a handful of objections from republicans in the House of Representatives. This widespread acceptance is actually proof that the effort was misguided. On the one hand, we are told to hate the likes of republican leaders like Mitch McConnell, but suddenly celebrate when they toss a bone. When Joe Biden signed the law which made Juneteenth a federal holiday his remarks were replete with platitudes about the sin of slavery, the redemption of American progress, the importance of HBCUs and home ownership, and just for good measure, a plea to be vaccinated against covid. The laundry list of topics was further proof that a people’s holiday has become meaningless.

Juneteenth’s only value is if it becomes a day of serious study and political education. That process can start with learning why “Jim Crow Joe” Biden received 90% of the Black vote or why the 2020 rebellions after George Floyd’s murder created a need for the state to placate Black people, if only symbolically. The Civil War is a perfect starting point for this practice. If there is a day off it should be used wisely and well. In the future, all people’s holidays should stay that way. Perhaps they should be kept secret so that commemorations aren’t used to give legitimacy to bad actors. It is too late for Juneteenth, but the hard lesson can be the beginning of something far more valuable.

Margaret Kimberley is the author of Prejudential: Black America and the Presidents . Her work can also be found on Twitter  and Telegram . She also provides additional original work on Patreon . Ms. Kimberley can be reached via email at Margaret.Kimberley(at)BlackAgendaReport.com. Margaret is also a member of the Green Party of New York.